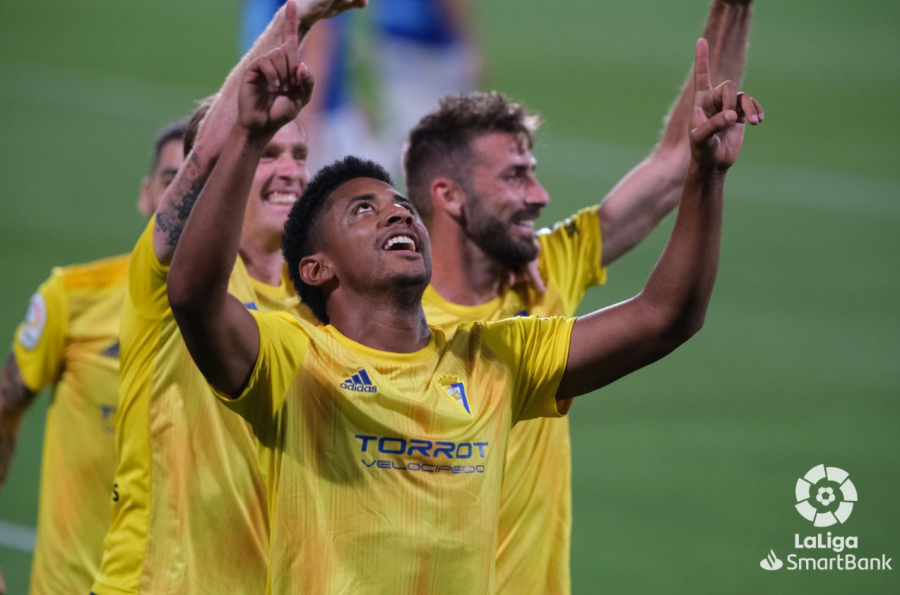 SD Huesca, Cádiz CF and Elche CF are back among Spain’s top 20 clubs once again. Following these three clubs’ exertions last season, promotion into LaLiga Santander was achieved and the objective is now stay in the division to help maintain growth.

LaLiga’s own international expansion offers an example of how an organisation can increase the value of its business by increasing the value of its brand. For the three clubs who have just achieved promotion, success has created a renewed ambition to grow globally alongside LaLiga and to open new business avenues while they are in the top-flight.

Cádiz CF: Business understanding creates sporting success
Although Cádiz CF finished runners-up in LaLiga SmartBank in 2019/20, the Andalusian club achieved promotion before anyone else as Real Zaragoza’s 4-2 loss to Real Oviedo during matchday 40 mathematically secured Cádiz CF’s first season in the top-flight since 2005/06.
Speaking about the achievement, Cádiz CF president Manuel Vizcaíno said: “One of the main reasons for the club’s success has been to understand the business we’re in, from the sporting idiosyncrasies of the competition to the economic side. Knowing how to adapt to the circumstances set by the competition over the course of a season allows you to achieve sporting success.”

Looking ahead to the 2020/21 season and what success would entail, he added: “It would involve staying in LaLiga Santander for next season, because we know how difficult it can be to stay up after coming up.

“It’s not just about reaching LaLiga Santander, it’s about remaining there in order to grow as an institution. There are many good examples of teams who have achieved promotion to LaLiga Santander in recent years and then managed to consolidate that position. We’ll study the best aspects of each of these cases to try to adapt this to our club’s circumstances.”

The Andalusian club’s overall growth
The president added that promotion requires changes at all levels to continue the professionalisation of the club. In line with this, there are plans for developing the infrastructure of the club, from the sporting department to day-to-day operations.

“We have to know how to make investments at sporting and non-sporting levels that help the club to grow, independently of what division we’re in,” Vizcaíno explained. “There’s no doubt that being in LaLiga Santander allows for quicker growth at an economic level than being in lower divisions. Yet all the growth we’re doing here has to be with the long-term future in mind, not just the short-term. The growth of this club has to be an overall growth, in all departments and all sectors.”

For neutrals, the return of Cádiz CF to LaLiga Santander is a welcome sight, since there are many admirers of the team, the fanbase and the city. “Cádiz CF has always been one of the clubs with the greatest admiration across Spain,” Vizcaíno commented. “Speaking about Cádiz and Cádiz CF provokes a sense of happiness among football fans. This is something we want to deliver on, as well as the freshness we can bring from coming up as a humble club. We know there may be a lot of support from other fans as we aim to achieve our sporting objectives.”

SD Huesca: The value of an identity
SD Huesca arrives as the champions of LaLiga SmartBank, with last season’s 70 points putting the Aragon-based club in first place. This was a bounce-back promotion, achieved thanks to a balanced squad and the coaching of Miguel Ángel Sánchez Muñoz, better known as Míchel.

As SD Huesca director general Josete Ortas explained: “We’ve been able to instil our club identity in all areas. At the same time as we set out to achieve our objective of returning to LaLiga Santander, we were focused on building a more solid and well-organised professional structure at the club. The staff at the club has grown and everyone has bought in to the philosophy of transparency and teamwork.”

This is SD Huesca’s second ever season in Spain’s top-flight, after spending one year at this level in 2018/19. The objective is to improve on this as the club returns to the top tier for 2020/21. “We want to achieve survival and we’ll also look to land new and solid commercial deals and to make advancements with the redevelopment work on our stadium,” Ortas noted.

For SD Huesca, it is preferable to work on such goals while in the top tier. “It offers great opportunities to help our educational projects to grow, something which is fundamental for our club, our academy and our charitable foundation,” Ortas continued. “With the effort of all the employees at this club and with the continuous support of LaLiga, we can meet our objectives.”

Grassroots football and the international market
SD Huesca’s youth ranks are an important part of the institution’s identity and as Ortas pointed out: “It has already helped us to strengthen the first-team squad and will continue to play a key role in the development of our brand at a local and global level.”

Advancements are expected for SD Huesca in an international sense this term, especially with Japanese icon and last season’s top scorer Shinji Okazaki playing up front for the team. “In recent years, we’ve built a good following among supporters in Japan, for example, and we’ve supported this by opening social media profiles in Japanese along with the support of LaLiga,” Ortas added.
To define SD Huesca as a club, Ortas said: “This is a welcoming and open club and, at the same time, a serious club where things are done well. This model has been successful for us away from the pitch too as it has helped us to improve our image in the minds of football fans. One desire for this season is for us to become many people’s second favourite team.”

Elche CF: Hard work pays off
The last club to secure a berth in the 2020/21 LaLiga Santander season was Elche CF. The club from the Valencian Community achieved promotion through the LaLiga SmartBank playoffs, overcoming Girona FC 1-0 on aggregate in the final.

Elche CF director general Patricia Rodríguez revealed what lay behind this success, saying: “There was hard work from everyone who forms part of this club. We’ve started to believe again that it is possible to reach the top and that you can achieve what you want and make your dreams come true through hard work, ambition and effort. The word ‘impossible’ doesn’t exist in our dictionary. All of the long hours, difficult moments and sacrifices from the people here have brought about this well-deserved prize.”

“The club is a whole and the sporting part isn’t separated from the rest,” she noted. “We want the Elche CF brand and the club’s image to develop at the same time as consolidating our place in Spanish football’s top division.”

A lot of work has already been carried out on the club’s branding, particularly during the lockdown that took place earlier in 2020. As Rodríguez explained: “We now need to push on so that when people hear about Elche CF they think of a club that is innovative and sustainable, a club that offers a unique experience to fans, a club that is close to its fanbase and a club that is exemplary in terms of management.”

Sustainability as the definition of Elche CF
One year ago, a restructuring process was launched at the club and an update to this strategic plan is due to be presented this September, with various phases to be established.

“The first part of the plan was to achieve economic stability in the first year,” Rodríguez explained.