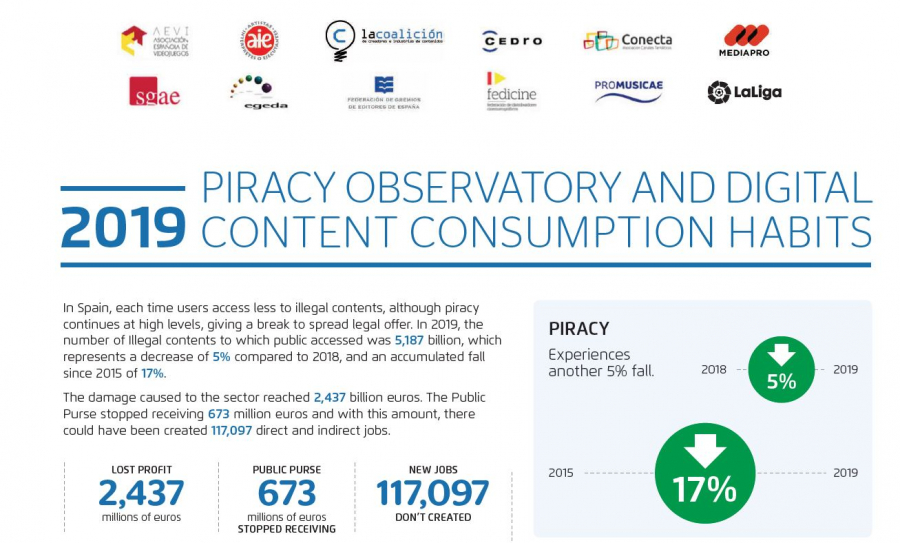 The consumption of pirated content remains one of the biggest threats to the sport and entertainment industry, but there are signs that the tide can be turned. A recent study has identified a drop in illegal access in Spain, particularly within the football industry, where LaLiga’s protection of content department has been applying significant efforts in recent years.

The 2019 Piracy Observatory and Digital Content Consumption Habits report, conducted by independent consultancy firm GFK, found that there was a 5% fall in consumption of illegal content in Spain in 2019, compared to 2018. That continued the general downward trend which has seen the level of piracy in the industry fall by 17% since 2015.

LaLiga, which created its internal anti-piracy department in 2014, is at the forefront of this fight to protect the value of match broadcasts for its own competition and the wider industry. As Spanish professional football accounts for 1.37% of Spain’s GDP and around 185,000 jobs, significant efforts are made every year to push piracy further away from the game.

“As a part of the entertainment industry, LaLiga is doing its bit to put a stop to this scourge, which not only affects football but thousands of people who work in the industry,” said Melcior Soler, audiovisual director at LaLiga. “Audiovisual piracy is a crime. It endangers the future of the game, the league and the sport as a whole. What’s more, many people are directly or indirectly dependent on the industry. That’s why we’re firmly committed to continuing to lead the battle against piracy.”

LaLiga’s five-star strategy
LaLiga’s content protection department is made up of 20 experts with backgrounds in technology and sport, helping it to tackle the problem in a holistic way.

“It requires significant investment to develop the tools to tackle piracy and LaLiga has long understood this,” explained Emilio Fernández del Castillo, head of content protection at LaLiga. “We have been able to invest in human and technical resources and have also benefitted from the assistance of fellow experts from other departments, such as legal and integrity, communication or internationalisation.”

There are five core elements to LaLiga’s strategy. The first is legal, as a thorough understanding of anti-piracy laws has allowed LaLiga to bring about blocking orders in various different countries.

The second is to work in collaboration with specialised international coalitions to help change legal frameworks to make it easier for honest businesses to protect their intellectual property. Specifically, LaLiga forms a part of Alianza, Sports Rights Owners Coalition, Coalition Against Online Video Piracy, Audiovisual Anti-Piracy Alliance, Coalition Against Piracy, Antipiracy & Content Summit and the IPTV Working Group of the MPAA.

The third pillar is technology. The department has developed various in-house tools that help streamline the detection and reporting of illegal behaviour, including Marauder (a tool which assists with the detection of illegal content), Lumière (a system which can digitally extract evidence and provide information on illegal pages) and Blackhole (a tool which helps draw up maps of IPTV platforms at a national and international level).

The fourth element is communication, with various campaigns launched by LaLiga or with the league’s support to help raise awareness of the risks and dangers associated with illegal content consumption. In addition, communication has also been established with third parties about their potential involvement in illegal activity.

The fifth pillar is integrity. LaLiga works with a team of former police officers whose remit is to carry out investigations in the main hotspots where audiovisual piracy networks are pinpointed, collecting evidence in order to process complaints.

The drop in football piracy
As LaLiga continues to evolve its approach, adapting its methods year-on-year to stay ahead of the pirates, there is evidence that its methods are working.

The GFK report shows that between 2018 and 2019, illegal football content access dropped in Spain by 19%. That is a far larger decrease than other sectors studied, ahead of music (a decrease of 12%) and films (a decrease of 9%). In contrast, piracy of books, series and video games had experienced upward trends.

Piracy remains a huge burden on the industry, underlined by the report’s finding that the estimated value of pirated football content in Spain is €372m. However, this is 11% lower than the same figure for 2018 and again represented the greatest drop of all sectors, followed again by music (a decrease of 8%) and film (a decrease of 5%).

Outside of Spain, LaLiga is also taking positive steps. Based on its own analysis, LaLiga blocked over 903,000 illegal videos during the 2019/20 season, as well as over 375,000 videos on social media, 922 applications and was able to deindex over 80,000 illegal URLs. Court orders were issued blocking access to 18 different web domains, affecting over 5.3 million users, while complaints have been filed against the operators of 25 IPTV websites.

The importance of collaboration
To help make the fight against piracy and international one, collaboration has become a major part of LaLiga’s anti-piracy strategy. Spain’s football industry may have experienced the best numbers in GFK’s Spain-focused report, but LaLiga’s objectives remain global in nature and apply to the entire entertainment industry.

For this reason LaLiga actively participates in various anti-piracy coalitions and offers its own services to other leagues and competitions. Belgium’s Pro League and Dorna Sports, the rights holder for competitions such as MotoGP and WorldSBK, are two examples of competitions that now benefit from LaLiga’s expertise.

Tools such as Lumière have also been shared with the Spanish government’s Ministry of Culture and Sports as well as INDECOPI (National Institute for the Defence of Competition and the Protection of Intellectual Property) in Peru.

By expanding these collaborations and building on its commitment to technology, LaLiga aims to turn the downward trajectory of piracy into a global phenomenon.

“We feel it is our responsibility as rights holders to protect the audiovisual value of competitions for the sake of broadcast partners and clubs,” Fernández added. “Sports rights are a valuable asset that are being stolen and the industry must work together to correct this.”