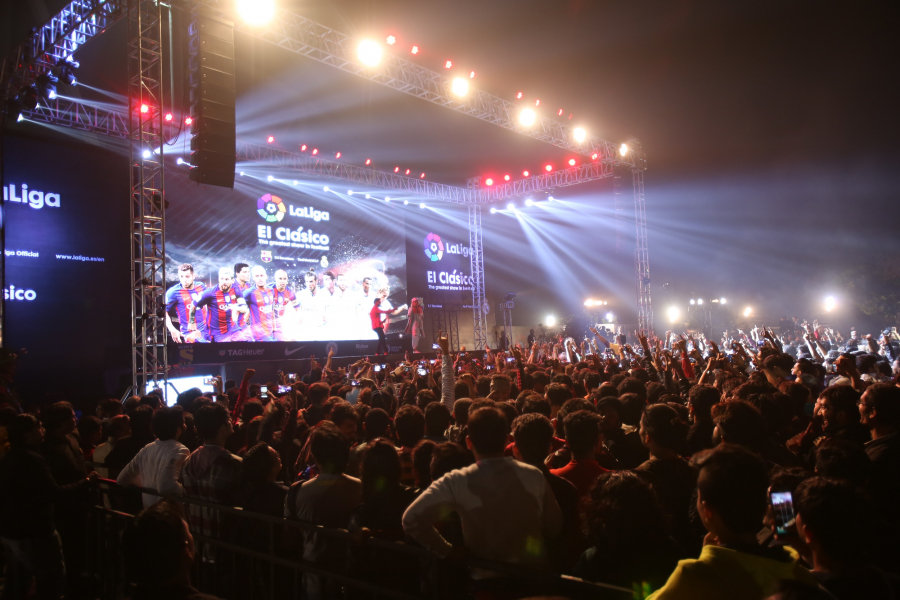 This month LaLiga marks three years since it arrived on the Indian subcontinent and began a series of projects designed to grow the reputation of the league and football in general. From its office in New Delhi, it has built one of the competition’s largest fanbases outside of Spain and embraced new digital trends, while increasing access to the country’s second-favourite sport.

The challenges of entering a market like India are clear, from the relatively low profile that football has in the country to the lack of a Spanish-speaking population. Despite this, LaLiga has been able to make significant progress in its time here and is well positioned for future growth.

Between 2016 and today, the competition has grown its online following from 300,000 to over 4 million. Across the whole Indian subcontinent, this number reaches more than 10 million, which represents 10% of LaLiga’s global followers. Fans have also been engaged in person, with more than 50,000 people attending public viewings of LaLiga matches in 2018 alone. Meanwhile more than 10,000 youngsters have been trained in the game through the LaLiga Football Schools initiative.

The reasons for this success lie in a wide-ranging strategy that the league has implemented. However, one of the key initiatives has been a first-of-its-kind broadcast agreement with Facebook that allows fans on the Indian subcontinent to stream live LaLiga matches for free. Matches broadcast on the platform are now receiving engagement from more than 1.1 million fans in some cases, while LaLiga’s Indian following on Facebook has also overtaken that of the Premier League.

“Broadcasting through digital platforms creates more opportunity for real-time engagement, which is very important for growth” said José Antonio Cachaza, the managing director for LaLiga in India. “Everything we do has to resonate on digital platforms for us to be successful.”
Building a strong digital platform has helped the competition to carry out a series of successful campaigns with clubs and local stakeholders. Initiatives of note include Girona FC’s trip to play against Kerala Blasters in Kochi, a partnership with fantasy football creators Dream11, working with the Vicente Ferrer Foundation to promote women’s football in rural India and the naming of cricket legend Rohit Sharma as the first ever Brand Ambassador of LaLiga in India.

Commenting on the success achieved so far, LaLiga President Javier Tebas said: “Our three years in India have passed very quickly and we have accomplished our sporting and commercial objectives. To all our fans in India, who follow us through Facebook and other platforms, we can say that our work is only just beginning.”

Cachaza added: “Our main objectives are to keep building our brand presence and to develop a strong football culture across the country. We want to see strong local leagues in every country, with LaLiga as the most popular international competition. The progress we are seeing in India shows that both of these are achievable. Being in such a dynamic market, it has been critical to constantly evolve, adapt and come forward with innovative and clutter-breaking ideas for our existing and potential fans and, with the new decade upon us, we look forward to doing exactly that.”

Creating opportunities for clubs
In addition to the league’s efforts to grow grassroots football, the local leagues and the overall passion for the sport in India, several LaLiga clubs are launching their own projects to get closer to their fans in the region.

For example, Sevilla FC recently partnered with LaLiga Football Schools to run a masterclass for over 70 young players in Pune, with expert LaLiga coaches running the activities. The youngsters were able to wear Sevilla FC kits as they learned technical skills and also participated in a series of fun challenges, from three-vs-three matches to dribble circuits to keepie-uppie contests to crossbar challenges.

The Andalusian club had previously held an intra-centre event in the city in July 2019 which was attended by more than 120 students. “Sevilla FC again showed its commitment towards grassroots development in the country and made sure that this not only provides an immersive experience for the aspiring footballers but that it also motivates them to perform their best and become the first Indian global football superstar,” said Cachaza.

Other LaLiga sides such as Cádiz CF are adding to these initiatives by organising scholarship programmes to select aspiring footballers from India to visit Spain and to receive top-quality coaching. The LaLiga SmartBank side is currently holding trials in 22 cities across the country, continuing a scouting programme that it initiated in India over a year ago. “Cádiz CF is showing a high level of commitment to developing new talents here and we are very happy to work with them towards this,” Cachaza noted.

LaLiga Santander sides including Real Betis and Celta Vigo are similarly partnering with LaLiga to support grassroots football, with Real Betis working on a LaLiga Football Schools programme in the southern city of Bengaluru and Celta Vigo in Noida in the north of the country.

“We are pleased to join hands with LaLiga and to have the opportunity to work together in Bengaluru,” said Ramón Alarcón, Real Betis’ Chief Business Officer. That excitement was echoed by Germán Arteta, the Director of Celta Vigo’s Charitable Foundation who said: “It is a pleasure for Celta Vigo and its foundation to go hand in hand with LaLiga in a country like India with enormous potential.”

As LaLiga’s strategy for India and the Indian subcontinent continues to grow, more and more clubs will benefit from these initiatives. But more than that, the league expects to lay the foundations that will change the role of football in India forever. “In all the activations and engagements we have done over the past three years, we have seen the talent and following for the sport grow,” concluded Cachaza. “Our commitment towards developing football across the globe is what drives us.”