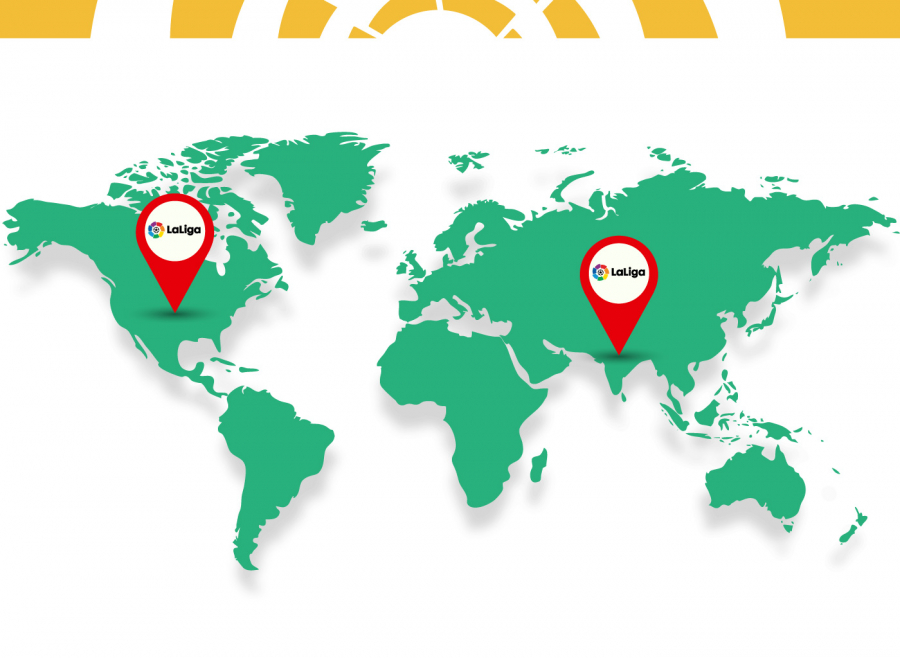 LaLiga propel into the US and India with historic agreements

It is one of the most important moments in the history of LaLiga and its clubs in terms of international expansion.

Two vital, recently-completed agreements will be essential in terms of the league’s growth in two key markets that everyone wants to be in, but only a select group can access: the United States of America and India.

“In India, we will have the opportunity to increase our exposure in a country of 1.3 billion inhabitants and where football is the second national sport,” outlined Oscar Mayo, who is the director of International Development for LaLiga.

He was referring to a partnership with Facebook that has enormous potential for the company.

Thanks to the agreement with the social media platform, which will be enforced during the current campaign and two more afterwards, Facebook will broadcast 380 LaLiga Santander games free of charge.

It will also be available in seven other countries: Afghanistan, Bangladesh, Bhutan, Nepal, the Maldives, Sri Lanka and Pakistan, a very complex market which is wide open for LaLiga clubs.

“This deal leads to greater exposure, which translates into opportunities for all to increase our presence in India,” Mayo continued, in reference to a country where LaLiga now has a five-person office headed up by Jose Antonio Cachaza.

“It is essential to work closely with the digital department of LaLiga so that everyone, both the clubs and the league, can get the most out of this.”

A plethora of business opportunities are set to appear on the horizon as a result of this affiliation.

“It is a unique opportunity for clubs to position their brand and develop new audiences and fans in an emerging market like the Indian subcontinent,” said Alfredo Bermejo, head of digital strategy at LaLiga.

“Clubs will be able to share, through their official accounts, a very broad content package, ranging from the broadcast of live matches and highlights to summaries and promotional clips throughout the week.

“We want to maximise the use of this content and be able to create new communities in tandem with it, by adapting the content to the needs of that market, which will be one of the keys to the success of this project.”

On the other side of the pond, another universe has opened up for the clubs of LaLiga.

The birth of LaLiga North America, a 15-year joint venture that is 50 percent owned by LaLiga and the multinational Relevent organisation to promote the game in the USA and Canada, is a historic milestone in a territory that needs no introduction and will be, along with Mexico, home of the 2026 World Cup.

Relevent, an American company with a great reputation in the media, sports and entertainment sphere, own the pre-season International Champions Cup competition.

“We face a 15-year strategic plan which allows us to work thinking in the medium term but while looking for results from the early years,” said LaLiga’s director of international development.

“We don’t only focus on sponsorship or events but we work with all of the variables in mind to guarantee the ultimate goal: significantly increasing our presence and interest in that market and enhancing the value of our audiovisual rights.”

It is a joint venture which is determined to be a success and is starting out with an ambitious goal too.

“We will work to become the foreign league which has the greatest influence in the US,” Mayo insisted, which is why the partnership with Relevent is so important.

“Relevent provides economic and structural resources to accelerate our business potential in the US.

“They guarantee priority business openings and access to talent, expertise and networking, all of which is fundamental to our success.”

Co-ordination between the various departments of LaLiga and their liaising with Relevent is key in the development of a macro project in which many areas converge: communication, brand development, events, sports projects, digital, a medium-term audiovisual plan, commercial, sponsorships and visibility.

As part of the integral plan to conquer this key market, the contesting of a LaLiga Santander game on US soil is also scheduled.

“Every weekend, our competition is watched in more than 185 countries, having the opportunity to bring a match to this market would be a unique experience for everyone,” Mayo stated.

“It is a project that is being prepared calmly and carefully, taking into account all parties involved: the supporters, clubs, players and sponsors.”

Never before in the history of LaLiga have fans from all over the globe been so close to the action, nor have they experienced the best league in the world first hand.

“I think that both agreements, for different reasons, guarantee a great presence for the clubs and LaLiga in two very important markets in the coming years,” concluded Mayo.

The millions of LaLiga fans are expanding at breakneck speed all over the world.

Now, two locations marked in red on the strategic map, the USA and India, are closer to increasing even further thanks to the agreements they have reached with LaLiga.