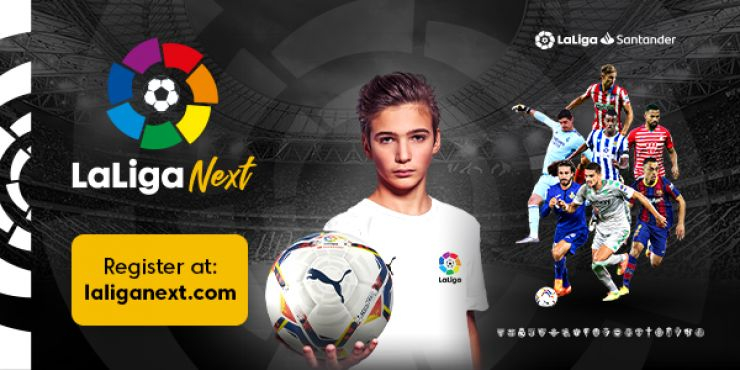 LaLiga North America, together with global sports agency ISL, is launching LaLiga Next: a platform that will provide young players between the ages of 14 to 18 the opportunity to showcase their talent and start a professional football career in a LaLiga youth academy.

The launch of LaLiga Next is an important milestone for LaLiga in the United States, as it represents the first legitimate recruitment process for young American players led by an international sports league in North America.

This project is part of LaLiga North America’s action plan to contribute to the growth of the sport known as ‘soccer’ in the United States, while continuing to provide all resources and opportunities to help American talent in its preparation for the 2026 World Cup.

With these types of initiatives, LaLiga is encouraging and facilitating the arrival of new American talents to Spain at a young age. Already promising young stars are emerging in the competition, such as Sergiño Dest and Konrad De La Fuente at FC Barcelona, and Yunus Musah at Valencia FC.

“LaLiga Next aims to contribute to the development of young American talent, providing players an opportunity to showcase their talent, an experience that will step up their game, and ultimately, the chance to kick off their dream of becoming a professional soccer player and one day represent their country in the World Cup”, says Nicolás García Hemme, VP of Strategy & Business Development for LaLiga North America. “Our goal is to collaborate with local clubs to become their international recruitment arm and continue to add new locations every year in different American regions.”

This unprecedented initiative will start between June 21st and July 13th 2021, with several Talent ID events held across different cities in the United States. The initiative is expected to gather thousands of participants.

Approximately 60 players will be selected by LaLiga scouts to embark on a Spanish Showcase in Madrid. During a period of 10 days, this group of players will train and compete with the best clubs in Spain under the supervision of different technical directors from LaLiga youth cubs, who will recruit the best player from each age category to participate in a sponsored training camp with a LaLiga youth club.

“Soccer in the US is becoming a reference in the production of talent; Dest,Pulisic, Musah, Tyler Adams, Reyna just to name a few,” explains Marc Segarra, ISL Co-founder. “The common trait of all these American players is that they have experience overseas. For that reason, we strongly believe that having an established path such as LaLiga Next will enable aspiring professional soccer players in the United States achieve their dreams.”

LaLiga Next will open the doors of European soccer to American players, creating a quality reference in US soccer, while positioning Spain as an attractive market for young US players.