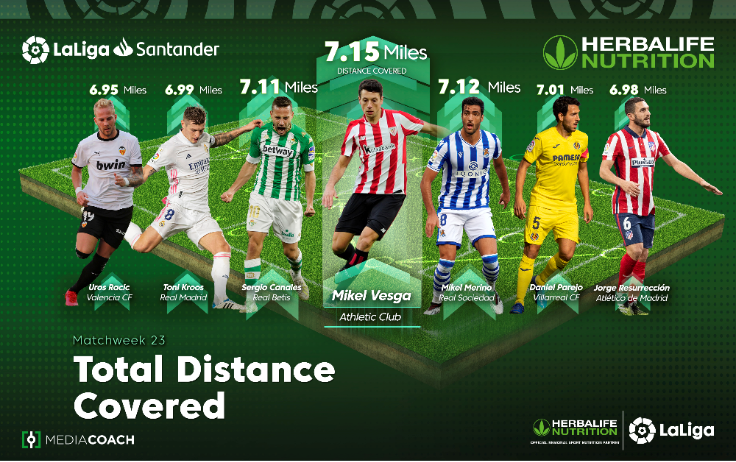 The North American market is diverse and competitive when it comes to engagement with football fans. But with a growing love of ‘soccer’ and a World Cup in the USA, Canada and Mexico around the corner, the opportunities are impossible to ignore.

For LaLiga North America, the joint venture created between LaLiga and Relevent Sports Group in 2018, building strong commercial partnerships has been a central part of building local relevance, such as the partnership recently set up with the global nutrition specialists Herbalife Nutrition.

Using the global experience of both organisations, a digital content plan has been put together that engages targeted groups of fans in both English and Spanish, providing audience growth even during a global pandemic.

Speaking at the recent Soccerex Connected conference, LaLiga North America head of partnerships Patrick Lowe said: “I can’t say that there’s a blanket solution for partnerships across the globe. Each LaLiga office will face different hurdles and challenges. Key for us is having a partner that wants to activate. Seeing a partner that buys into the sport from a 360-degree approach and is also dedicated to activating partnerships is huge.”

“LaLiga is one of the top leagues in the world and we want to be partners with that type of premier brand,” added Meghan Magid, the director of global sports marketing for Herbalife. “We hadn’t really done a lot in the leagues space and this gave us an opportunity to dip our toes in with North America and to see how it is received. It has been amazing.”

Content at the core
One of the reasons why so many sports fans are engaging with LaLiga is the content strategy that LaLiga North America has developed, which caters to fans in two different languages.

“The way Boris [Gartner, LaLiga North America CEO] positioned LaLiga was not to just dip into a hot market during a ElClásico match and then say ‘see you later’,” continued Lowe. “Everything we do has content at the core. For LaLiga, it’s clear that the authentic fit for us is to connect with the Hispanic American fanbase, whether first-, second- or third-generation Hispanic Americans. Some of those fans prefer to consume LaLiga perhaps in Spanish, but there are others that prefer to do so in English, as well as in different platforms and formats.”

The very first show LaLiga North America produced was in Spanish and starred former Mexico international Luis García Postigo. There are 14 weekly shows being crafted in English and in Spanish from the joint venture’s new studios in Mexico, supported by LaLiga’s global team of ambassadors and delivered to specific audiences via geotargeting.

For Herbalife, this array of content is an attractive way to engage with new fans and to grow their own business. “We know that LaLiga is where consumers are turning and we want to be with them on that journey,” Magid continued. “Our work in football is expanding and we want to be expanding into one of the leagues that consumers are following and are really engaged with.”

Positive results for LaLiga and Herbalife
As a LaLiga partner, Herbalife will form part of the creative initiatives that the joint venture has created for the North American market. Among these will be a range of virtual watch parties, organised to give fans a unique way to enjoy the competition in the company of footballing legends.

“It’s about taking those experiences and access to legends and getting creative on how you actually build and develop and create that together with the brand partner, to ensure you drive the results the that we’re all looking for,” Lowe commented.

There is already positive momentum for Herbalife to build on. “Announcing our partnership with LaLiga was one of our top performing posts of 2020,” Magid revealed. “It allowed us to promote what we can provide at a sports nutrition level and educate about how we help sports teams and athletes around the world.”

This could also bring positives for other Herbalife partners, including LaLiga Santander club Real Valladolid, which announced a new partnership with the brand earlier this month.

A digital-first strategy
While the joint venture is looking forward to resuming in-person events when health conditions allow, LaLiga North America expects to drive a significant part of growth, both for itself and its partners, through digital media.

“LaLiga was always a digital product when it came to the North American market, with the exception of some of the events and activations we were planning in person,” Lowe said. “I’d say the shift or pivot over the last year has not been too difficult for us. Having content at the core of what we do has enabled us to still deliver and execute at a high level for the partnerships that we have.”

In addition to the Herbalife partnership, LaLiga North America has also been working with brands such as Verizon, PointsBet, Camarena Tequila, Fanatiz and others. While each case is different, the focus on entertaining sports content, the ability to work digitally and the hyper-local targeting of fan groups has proved to be the recipe for success.

As Magid underlined: “Covid has allowed us to take a step back and look at our long-term strategy. It’s clear that soccer is working for us and helping our message get out there. Working with LaLiga, we’ve already been able to get so much done and we have activations planned right the way through the rest of the season.”