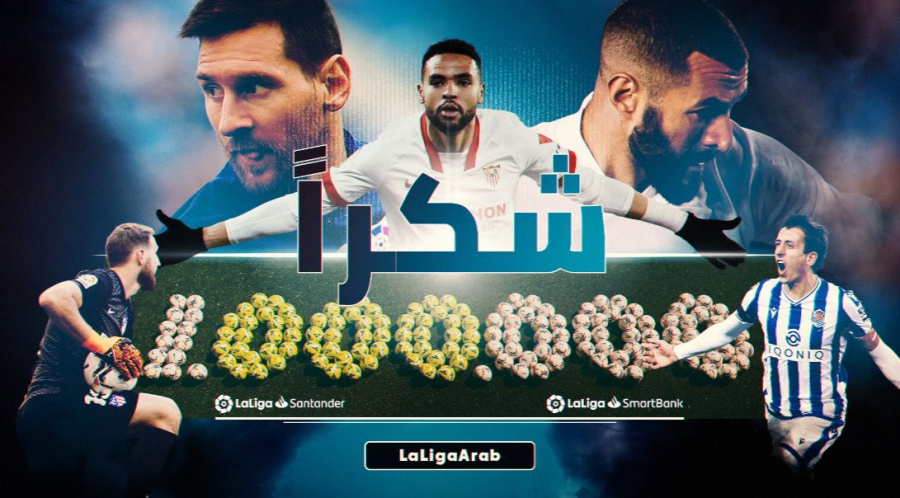 The Middle East and North Africa (MENA) is set to increase its influence on the global sports industry in the next three to five years, with a recent PwC study predicting almost nine percent growth of its sports-related business before 2026.

Global rights holders can be a part of this growth if they commit to a local presence across the region and form partnerships that are designed to grow football from the ground up, according to Maite Ventura, managing director of LaLiga in the region.

As the first overseas league to open physical office space in MENA in 2013, LaLiga has seen the benefits that this approach can bring. The competition has reached 24 million social media followers across the region, including one million followers on LaLiga’s Arabic Twitter account. Broadcast audiences also continue to grow, with numbers having increased by double digits over the past three years. To consolidate this, the league has an on-the-ground presence in seven countries, where it works directly with local partners and competitions.

Speaking at the recent Leaders Week Abu Dhabi event, Ventura highlighted the need to maintain this physical presence in target markets to build new collaborations that can help the MENA sports industry reach its potential.

The unique LaLiga Global Network
“There are two main factors,” Ventura stated. “First of all, there’s the LaLiga Global Network, which is something that is absolutely unique in the sports industry. We have 11 international offices and over 45 delegates in different countries, which means we can cover more than 80 countries in a physical way. This allows us to understand the local needs of the different fans that we have and to build the relevant activations locally. This is our biggest asset for succeeding.”

Having initially joined LaLiga as a delegate in MENA when the project was launched in 2017, Ventura was promoted to managing director of LaLiga in MENA in 2019. She now works in coordination with the league’s delegates based in Morocco, Egypt, Qatar, Turkey, Iran and the UAE, each of them sharing insights on consumer habits in order to build commercial strategies.

“This work has helped us build local partnerships,” Ventura added. “It’s essential to engage with local football institutions. We have a wonderful agreement with the Abu Dhabi Sports Council, for example, through which we deliver different workshops to different industry professionals.”

Building a football culture with local partnerships
LaLiga is an advocate of knowledge sharing between football’s different stakeholders to increase the popularity of the sport around the world. Through this approach, LaLiga has struck more than 20 different collaboration agreements with government bodies, football leagues and federations in the MENA region.

“We have achieved collaborations that go deeper into local football, something that some other competitions haven’t done,” Ventura continued. “Success for us is seeing more young people playing the game, not only in our academies here but across the region. It about creating a sustainable football culture, which is of benefit to LaLiga but also to any other league, international or local, that is looking to grow in the region.”

Football development projects carried out by LaLiga in the region include a professional competition established at the Zaatari refugee camp in Jordan, while programmes in Morocco and Egypt have helped teach youngsters football and language skills at the same time. In addition, the prestigious LaLiga Promises youth tournament came to Abu Dhabi which gave local teams the chance to compete against their counterparts from Spain’s best academies.

To date, over 5,000 youngsters have been involved in some way or another in LaLiga’s sports projects in the region. To consolidate this, LaLiga Business School has also been introduced to MENA, with the first international course held in Egypt at the ESLSCA Business School’s Cairo campus.

This local brand presence has led to significant commercial opportunities. A recent example is LaLiga’s new agreement with telecom giants Orange and Asiacell for the regional roll-out of LaLiga Xtra, a subscription-based mobile platform that offers exclusive content and experiences.

A basis for further global growth
As well as collaborating with these external organisations, Ventura’s team ensures that all insights are shared with LaLiga’s other international offices to support the global growth of the whole competition. Technology is a central part of this process.

“It’s important to share the knowledge that we have,” Ventura said. “We collaborate on technology tools and input data that demonstrates fan behaviour in different countries. This helps make the insights are transferrable as possible. If something works very well in Morocco then we can maybe replicate it in Japan, if we use data to adapt it to the circumstances of that country.”

With the local market set to enter a new era of growth, Ventura is confident that LaLiga is well positioned to take its MENA business to the next level and attract the next generation of sports fans to the competition.

“We are increasing brand awareness and visibility through our partnerships and our marketing activations, but there’s a lot more potential that we can unlock in the MENA region,” she concluded.

“In the next three to five years we aim to have at least one stable project or institutional agreement in all the countries of the MENA region. We will do this by forming the right relationships on the ground as well as increasing the presence of our delegates, but we already have all the tools we need to succeed.”