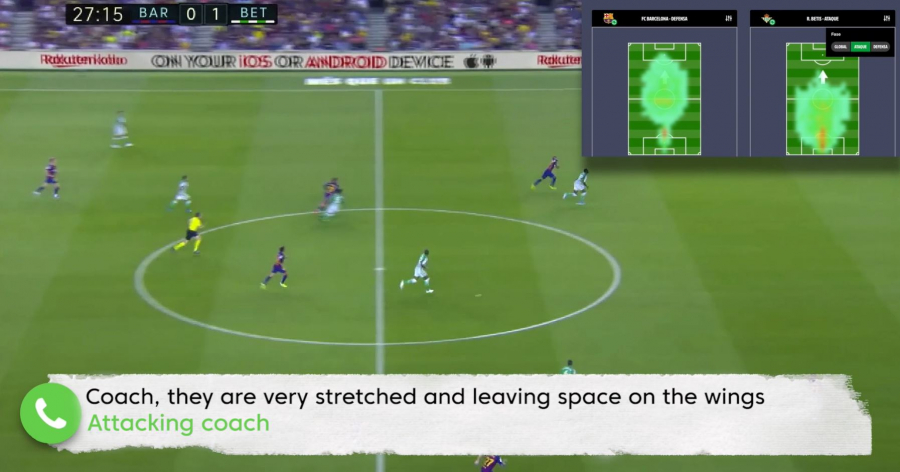 The smallest details can decide the outcome of a football match. With Mediacoach, the LaLiga video analysis platform, the clubs of LaLiga Santander and LaLiga SmartBank are at an advantage by gaining access to detailed in-match data on player positioning, distance covered, speed and ball movements.

Introduced to Spain in 2010, the tool is now used by the 42 clubs of the competition with over 430 club staff accessing it. The team behind Mediacoach is focused on adding new features that will sharpen the tool and ensure that even more groups, from club trainers to media partners, can benefit from it.

This season, Mediacoach has multiplied the number of cameras in the stadiums to take real-time tracking data to new levels, while opening the tool to more users via the cloud.

“The use of data is a huge differentiator for the global sports industry,” said Ricardo Resta, director of LaLiga’s sports area and the Mediacoach platform. “With Mediacoach we are ensuring that the best information can be accessed by all LaLiga clubs, no matter their size. It’s how we ensure that the league grows as one.”

The data that Mediacoach delivers is achieved thanks to perimeter cameras installed in the stadiums of LaLiga Santander and LaLiga SmartBank. During a match, players are tracked by TRACAB from ChyronHego, following the movement of players and the ball.

This season, up to 16 cameras installed around the pitch track these movements at a rate of 25 frames per second. Thanks to this, a team’s staff can now see live information on the distance covered by each player, the speed they’re moving at, or even real-time heatmaps across the pitch.

“Multi-camera technology is able to track movements on a football pitch down to very fine margins,” noted Resta. “Increasing its use in LaLiga stadiums provides even higher levels of accuracy so that coaches can make informed decisions in the heat of the moment.”

Scientifically backed data
Underlining the reliability of this data three new studies, two of which published by international scientific journals, confirmed that multi-camera technology can reach the same level of accuracy as GPS devices physically worn by the players, or even motion-capture technology.

The first study, ‘A comparison of a GPS device and a multi-camera video technology during official soccer matches: Agreement between systems’ was published in the peer-reviewed journal PLOS ONE. Comparing the data from GPS devices (WIMU Pro from RealTrack) that Barcelona B players wore on their bodies over the course of a season, there was no significant difference to the data obtained from the tracking cameras of Mediacoach.

The second study was published in the Sensors journal with the title ‘Validation of a Video-Based Performance Analysis System (Mediacoach®) to Analyze the Physical Demands during Matches in LaLiga.’ Using a similar methodology, this time using players from Real Valladolid, a different set of GPS devices (Apex from STATSports) were compared to Mediacoach, again with the same levels of accuracy.

The third study was completed by researchers from the Technical University Munich. Here, the tracking cameras used for Mediacoach were compared with the high-precision cameras of the VICON motion capture system, considered as the gold standard in the scientific community for such measurements. Once again, the results confirmed the reliability and scientific validation of the data that Mediacoach is offering to the 42 clubs of LaLiga Santander and LaLiga SmartBank.

“Backing up our technology with science brings confidence to the clubs,” Resta added. “Some clubs are ending the use of GPS trackers on their players as a result of this. It’s more convenient, for the club and for the players, to simply download movement data from Mediacoach.”

Access for all via the cloud
Having created the most reliable match data in the industry, the Mediacoach team has taken steps to ensure that more groups are able to use it. It has made the platform accessible via the cloud, removing physical servers from club locations.

“In discussion with the clubs, we found that many had coaches or technical staff who wanted to use Mediacoach but could not be physically in the stadium,” Resta explained. “Moving to the cloud helps all teams to follow the match together with the same level of insight, no matter their location.”

With this new feature, all partners and collaborators within a club can study live matches, or recent matches of an upcoming rival, to provide informed feedback. It allows clubs to cover more ground, with different individuals focusing on attack, defence, individual players, or physical conditions. Soon, a chat function within Mediacoach will allow all of these different teams to share their insights within the application, speeding up the decision-making process.

Beyond this, the cloud platform will make it quicker and easier to share the information with broadcast partners or sponsors around the world, allowing them to enhance their programmes and campaigns with new and insightful data.

“Mediacoach will remain transparent and accessible for everyone who wants to understand our competition better,” Resta concluded. “The use cases are multiplying by the day and the possibilities for the future are limitless.”