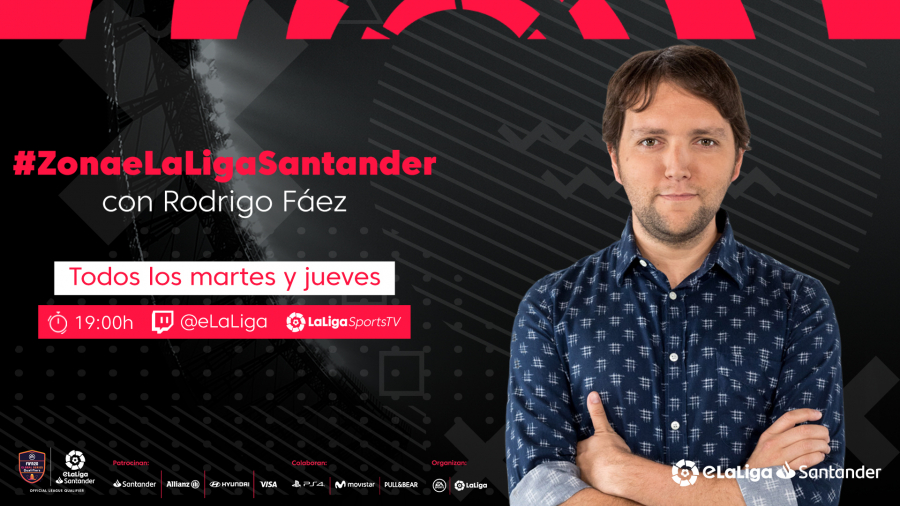 While physical matches have been postponed, virtual football has been thrust into the limelight. Although the sport has been building a significant fanbase over recent years, leading to the organisation of successful competitions around the world, the current pandemic has introduced a wave of new fans who are looking for new sources of entertainment online.

Audiences for eSports have shot upwards in recent weeks, reaching 11 million people in the case of #LaLigaSantanderChallenge, the tournament organised by LaLiga and Spanish influencer Ibai Llanos. It has also increased an interest in playing the game, particularly as many populations remain confined to their homes.

For these reasons, demand for eSports content is on the rise, a fact that has prompted a new series of programmes from LaLiga and its partner Electronic Arts.

Going inside the eSports world with players and clubs
The league’s apps and gaming Department has launched 'eLaLiga Santander Zone', a new twice-weekly show that offers news and entertainment - mainly to a younger audience - about EA’s world-famous FIFA 20 video game.

This initiative, developed along with EA Sports, aims to bring the eSports sector closer to all followers of LaLiga competition and will feature contributions from well-known professional football players, as well as representatives of the 34 clubs that already participate in LaLiga’s professional eSports league, eLaLiga Santander.

Using an online format ‘eLaLiga Santander Zone’ will be directed by Rodrigo Fáez, a well-known Spanish sports journalist who currently works for ESPN and runs his own YouTube channel with more than 200,000 followers. The programmes will include interviews with eLaLiga Santander players, professional LaLiga players, eSports influencers and football commentators, as well as showing the funniest aspects of the FIFA 20 game.

New programmes are planned for the next three weeks, to be broadcast on Tuesdays and Thursdays at 19.00 CET on the Twitch channel of eLaLiga Santander and on the league’s OTT platform, LaLigaSportsTV.

Helping eSports to build momentum during COVID-19
Like many other competitions, eLaLiga Santander has been affected by the COVID-19 pandemic and the league has been postponed until health authorities confirm it is safe to return. But during the absence of its regular calendar, the league has continued to create content that appeals to gamers.

Shortly after Spain’s enforced lockdown began and competitions were postponed, a charity eSports tournament was created by Ibai Llanos, an online influencer and commentator specialising in eSports competitions. With the help of LaLiga and Santander Bank, the idea grew into #LaLigaSantanderChallenge, a special three-day knockout tournament featuring 18 players from LaLiga Santander. Through inviting donations to UNICEF, the initiative raised over €190,000 to help support health organisations tackle the COVID-19 virus.

These ongoing projects are part of the 'LaLiga Se Juega En Casa' (‘LaLiga is played at home) campaign, launched by LaLiga to provide new entertainment content to its fans during the current health crisis. With the support of clubs and sponsors, these events are helping to bring entertainment to millions in a time of particular need, while helping eSports to show its true potential.