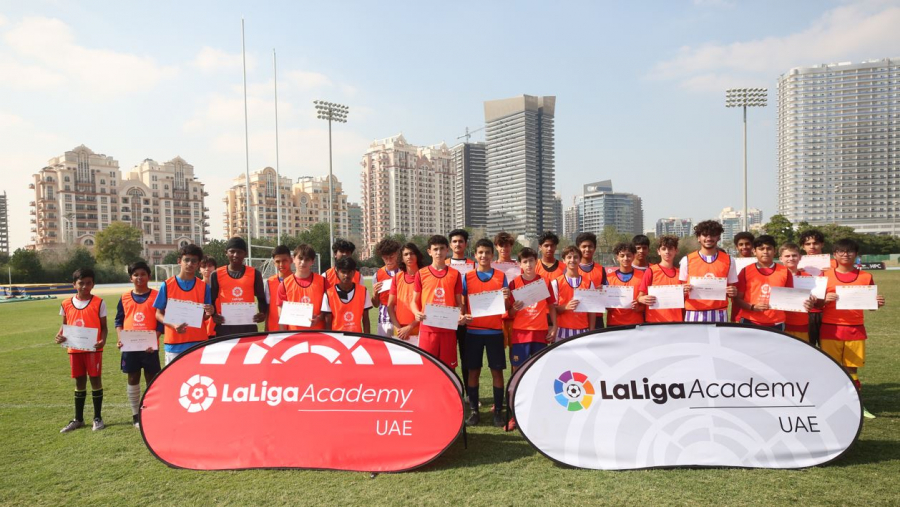 In line with its commitment to talent development and football excellence, LaLiga unveiled its LaLiga Grassroots program in the Middle East and North Africa, offering talent from across the region the next step in their football development pathway.

Following the announcement, a scouting event for LaLiga Grassroots was organized on December 11, 2021 at ISD, Dubai Sports City, allowed young players the chance to earn  scholarships at either LaLiga Academy or LaLiga Talents programs, as well as places at LaLiga camps, all in Spain, beginning in the summer of 2022 at LaLiga’s ESC Madrid Center.

The complex has an on-site 450-capacity residence, an international school equipped with an auditorium, library, laboratory, clinic, as well as several game, rest and study rooms. Likewise, the center houses two state-of-the-art football pitches and various training areas, an NBA court, gym and a swimming pool. Overall, this makes the centre the ideal place to achieve the synergy between sports training and academic education that LaLiga Grassroots seeks to achieve.

As part of their visit to Dubai, the LaLiga Ambassadors also attended the LaLiga Academy UAE Term 1 Closing Party to the delight of the nearly 1,000 players enrolled in the academy.

LaLiga Grassroots is the latest in a series of international sports development platforms that LaLiga has launched since 2015 across multiple markets, beginning with the establishment of the world’s first LaLiga Academy in Dubai.  The program creates unique opportunities for aspiring young footballers to obtain a superior education while they select development pathways for higher education scholarships at US universities or others.

“We are delighted to unveil LaLiga Grassroots in the MENA region, a new step in our ongoing commitment to nurturing youth talents across the region. With LaLiga Grassroots, we have created the next step in the development pathway, providing players with the opportunity to pursue their goals, both in their academical and football careers,” said Juan Florit, LaLiga Head of Sports Projects LaLiga Grassroots.

He added: “Our commitment to education forms the cornerstone of LaLiga Grassroots and we are applying both academic and sporting excellence at the service of players’ development.”

Former Real Madrid player and LaLiga Ambassador Fernando Sanz, Director of International Institutional Relations and the LaLiga Ambassadors and Legends project, who is in Dubai for the launch of LaLiga Grassroots said: “We have seen the difference a LaLiga development program can make, utilizing LaLiga’s know-how and methodology. LaLiga Academy UAE, which we launched in 2015 is now recognized as the UAE’s gold standard for youth development and LaLiga Academy HPC has been producing a steady pipeline of talent for professional clubs and US universities on scholarships.”

LaLiga Academy UAE has elevated youth football development to unprecedented professional levels with over 20 trials generated for players at LaLiga clubs, over 20 player contracts with UAE national clubs, 5 players having earned trials with their national teams, 4 players earning international contracts and 4 players earning scholarships to universities in the USA.

Commenting on this, Sanz added: “With LaLiga Grassroots, we are extending these opportunities further and scaling them up.”

“The work we’ve carried out over the years in training players and coaches internationally has taken things to the next level, not only for those who have worked with LaLiga, but also for the league itself and its clubs,” says Javier Hernandez, Head of International Development LaLiga Grassroots. “We’re convinced that now, with the creation of LaLiga Grassroots and the new programmes that we’ll be running at the ESC Madrid Center, we’ll be able to create better opportunities for everyone.”

LaLiga Grassroots features a structured grassroots football training methodology, which is adapted to each stage of a player's evolving development across two cornerstone programs: LaLiga Talents and LaLiga Academy.

Open to male and female players between the ages of 12 and 18 years, these programs provide athletes with an all-round education and training experience to LaLiga standards, while supporting their personal development both on and off the pitch.

LaLiga Academy focuses on improving and optimising the abilities of players who want to experience a unique sports and educational program curated by LaLiga while LaLiga Talents is centered around players who already work in a high-performance training environment, such as LaLiga High Performance Centers in Dubai and Abu Dhabi, with the aim of helping them develop and get the most out of their talent to reach the best level attainable.

In addition, with the aim of improving both preparation and development of individuals and groups, there will be short-term and long-term LaLiga Camps and high-performance training camps for teams, mixed groups and international players.