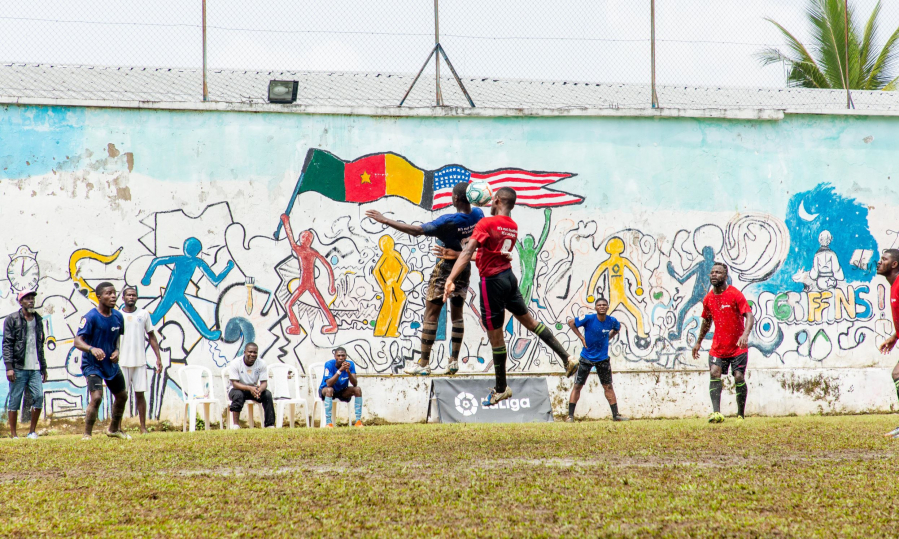 LaLiga Global Network in Cameroon: “We have adapted as the situation demands.”

In terms of infection rate, the COVID-19 pandemic has not made the same impact in Africa as it has in Europe, Asia or North America. But that has not stopped strict measures from being taken across the continent.

In Cameroon, the population of over 24 million are confined to their homes and have been since March 17th. All commercial premises are closed after 6pm and movements are heavily restricted.

The popular taxi-bus service, which usually carries up to 6 people in a shared car, has been reduced to 3 passengers. Meanwhile due to a lack of testing centres, home visits are being carried out by health authorities in order to help contain the spread of the virus.

Tresor Penku has been working in the economic capital, Douala, since 2018 as part of the LaLiga Global Network and has witnessed this transformation in daily life. But in these extraordinary circumstances, he has focused his attentions on using digital and written communications to entertain people, resulting in a huge increase in audience.

“For many people here, hunger is as great a risk as coronavirus,” Penku said. “There are people living on a just a few euros a day and work has greatly reduced. We all have to do what we can to support each other.”

As part of this, Penku has been heavily active in his role as LaLiga’s delegate in Cameroon, where responsibilities include maintaining relationships with key local stakeholders and creating initiatives that benefit local society.

“The work we do makes it essential for me to be here during this quarantine,” he added. “Staying close with partners and stakeholders is more important than ever.”

Five-fold increase in media coverage
The ability to form local relationships is a key principle of the LaLiga Global Network, through which 46 delegates are positioned around the world and cover more than 80 markets.

While physically meeting has not been possible, Penku has maintained and even improved these relationships by focusing on high-quality storytelling on an individual basis.

“We have multiplied our presence in media 5-fold since the lockdown began,” he noted.  “What is more, we reached media titles where we had not previously appeared, places where you might not expect to find mention of a football competition.”

In particular, Penku has used stories of LaLiga’s technology tools, or how the routines of LaLiga club psychologists, to reach media outlets that do not normally cover sport. “Our work goes much further than football and this is a message that is really starting to break through,” Penku said.

In addition, the use of targeted digital content has proved to be a big success with local audiences. Social media posts designed explicitly for Cameroon, written in the local language (a mix of French and English), have provided high levels of engagement.

This has helped to spread an important message of public health and social distancing. Using a message from Carlos Kameni, former Cameroon national goalkeeper and LaLiga player with RCD Espanyol de Barcelona, Penku successfully placed this video in numerous media outlets to ensure it reached an audience of millions.

“We have adapted to what the situation demands and we are seeing the power of good content to create a meaningful impact,” Penku continued.

Tackling alcoholism through football
The use of football to create social change is a key objective for LaLiga and one that Penku has been pursuing strongly during his time as a delegate. One standout success from these efforts has been the creation of the ‘Championnat Baka Sans Alcool’ tournament, held annually in the southern forest region of Cameroon.

“The Baka community is a deep jungle and incredibly remote, which has created a lot of social difficulties,” Penku said. “The greatest one is alcoholism, caused by a low-cost spirit that is sold illegally in the area. It has led to addiction and health problems in people of all ages.”

LaLiga Foundation collaborates with the NGO Zerca y Lejos to organise an annual tournament created for local children to take part in a high quality football competition that also offers education. The concept, which was inaugurated in 2015 by Zerca y Lejos, has been a game changer for the local youth. By donating football kits for all participants and referees, in addition to technical material for the tournament, LaLiga aims to bring hope and motivation to the community. Added to the tournament were workshops on the importance of avoiding alcohol and making healthy choices. This season, more than 120 youngsters took part over a seven-day event.

“Sport has an almost unique power to engage young people and help them make safer choices,” Penku added. “This type of project shows exactly why it’s important for LaLiga to have a presence here.”

Exposure for clubs
Through Penku’s efforts, LaLiga is making a growing contribution in Cameroon which also creates new opportunities for local stakeholders and clubs. This is being accelerated through a wide variety of initiatives.

LaLiga matches themselves have been a huge draw for fans of all backgrounds. A recent ‘fan fest’ held before the derby between Atletico de Madrid and FC Barcelona brought hundreds of attendees to take part in family games, eat barbeque food and enjoy VR viewing experiences before the match itself was shown.

Other matches, such as this year’s ElClásico between Real Madrid and Barcelona, were the setting for an exclusive CEO watch party, held with some of the country’s top business leaders. For other events, Penku has also involved local broadcast partners Canal+ and the LaLiga anti-piracy team, who offered their expertise in protecting audiovisual content, helping to improve this local relationship.

Whatever the setting, there is an opportunity to discover all clubs of LaLiga, with banners, shirts and other materials permanently on display. This is extended into the regular football events that Penku organises, where locals can choose to represent a selection of LaLiga teams. “We don’t just offer the global names but much smaller teams too,” he said. “Every year local people are getting more familiar with the 42 clubs that make up LaLiga.”

Evidence of this was shown at a recent quiz event that focused on the LaLiga SmartBank competition. “There were people getting every question right which was amazing to see,” Penku enthused. “You wouldn´t have seen that two years ago.”

United for a common cause
While Penku hopes to resume many of these initiatives in the near future he is clear there is still a lot of good that can be done while quarantine measures are in effect.

“Everything has to be done via video conference or WhatsApp but that should not stop anybody,” he said. “We’ve been able to reach even more people than before.”

“The LaLiga Global Network is about building good partnerships and that can continue in any circumstance. Right now we are all working together on the same objective which is to help overcome this difficult time as quickly as possible,” he concluded.