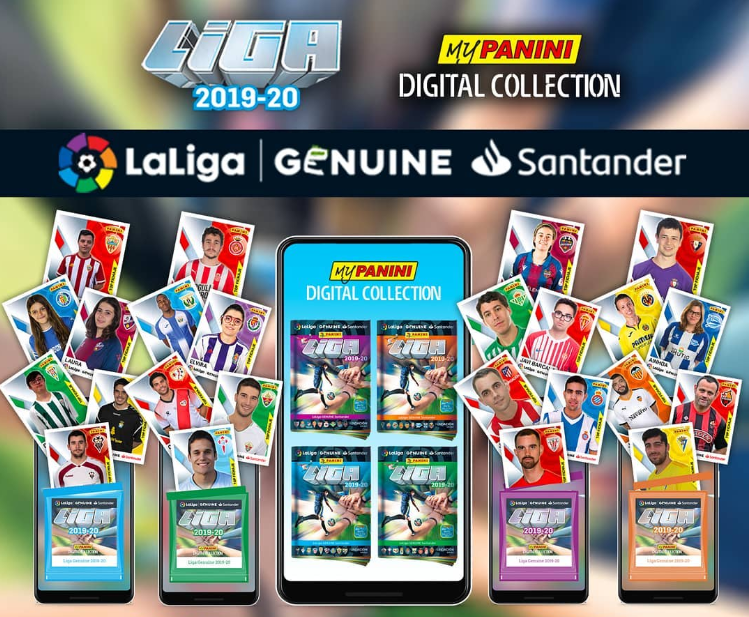 Panini football cards and stickers have become one of football’s great traditions, helping to introduce generations of fans to new competitions and teams. The players of LaLiga Genuine Santander have now become part of this tradition following the creation of official cards for the entire competition.

As the first professional league for players with intellectual disabilities, this marks a milestone for the competition, which was created through the LaLiga Foundation in 2017. Entering the world of Panini cards is a further step in the Foundation’s aims to promote sporting values and equal opportunities for players of all backgrounds. It can also help to attract new followers for what LaLiga President Javier Tebas has called “the true league of stars.”

A unique way to mirror the players’ idols
Over 1,000 male and female players who take part in LaLiga Genuine Santander, as well as the more than 160 coaches in the league, will see their photos and biographies made part of the competition’s first Panini card collection. For all those involved, the sense of achievement is clear.

Beatriz Méndez, coordinator of Real Oviedo’s Genuine team, said: “The day that this was communicated, some thought that it was a joke. We set the date for the photo shoot and when the players were posing for their photos they started to realise that this was serious. They were very excited to see how it turned out.”

“This is yet another demonstration of the firm commitment that the LaLiga Genuine Santander sponsors have to the teams and the players,” Méndez continued. “This project is similar to the one for our players’ idols in LaLiga Santander and LaLiga SmartBank. It helps them to feel like true footballers.”

Lorena García, President of UD Almería’s charitable foundation, added: “This is a brilliant act of inclusion that enables our players to feel a part of the sporting family in the same way as our other teams.  They are an important pillar in our overall structure and we’re proud to see them on these cards.”

Álex Abalde, a coach for Celta de Vigo’s Genuine side, believes the initiative can bring further attention to the league. “This is a fantastic way to keep developing and promoting LaLiga Genuine Santander,” he said. “Anything that helps develop the competition, its identity, its values, its teams and its players is fundamental.”

Four separate collections with nine teams in each
This album stems from a promise made by Santander España CEO Rami Aboukhair to all the teams at the official presentation for the 2019/20 season. Since then, players have been looking forward to the release date.

Although the COVID-19 pandemic has forced a pause in LaLiga Genuine Santander meetups, a videocall was organised by the LaLiga FOUNDATION for 36 representatives, one from each of the different teams. Both Javier Tebas and Aboukhair took part in that call to present the album.

There will be four different books, each one containing nine teams, which can be found here or downloaded via the MyPanini Digital Collection app. Collectors receive a selection of cards each day and can even exchange them digitally with the other users.

Abalde explained: “Once the publication of these cards was announced, the common feeling among the players was one of excitement. They were keen to have their own card and motivated to try to complete their album.”

Involvement from LaLiga Santander and LaLiga SmartBank players
To add excitement to the launch, players from across LaLiga Santander and LaLiga SmartBank took part to make surprise reveals of the new cards. During the call in which the album was presented, Juan Ibiza of UD Almería’s first team made an appearance to tell Daniel Aguilar, the representative of the club’s Genuine team, that his card was ready to view.

“We were asked by the LaLiga Foundation if a member of our first team could come on to surprise our Genuine team’s representative,” García said. “We always back these types of things at our club. Daniel was very happy to speak to Juan Ibiza and that was the aim. The two had a very affectionate conversation.”

A similar encounter took place at Celta de Vigo, where Genuine player Javier Iglesias heard the news from the club’s first-team goalkeeper Sergio Álvarez. “We put them in touch without Javier knowing who he was going to be speaking with,” said Abalde. “You can imagine the surprise and emotion he felt when he could interact and speak with a player who he said is one of his favourites. He said it was one of the best moments of his life and that he’d never forget it.”

Meanwhile Cele, a goalkeeper for Real Oviedo’s Genuine team, was given a surprise gift by the Asturian club. During this period of lockdown, he has been working in the food industry, providing a vital service to locals during the pandemic. “Cele is teaching us all the best lesson about inclusion by working like any other employee in his company, where he asks for no special treatment and has no label attached to him,” Méndez explained. “So, what better reward than a call from our first-team goalkeeper Nereo Champagne?”

Activities during the lockdown
Even though in-person meetups cannot take place for the time being, a lot of effort is going into providing entertainment for the players and supporters of LaLiga Genuine Santander at this time. Various challenges have been launched via the LaLiga FOUNDATION’s social media feeds, from quizzes to highlights videos to dancing challenges to online exercise videos.

The clubs are also taking an active role in supporting their teams. Celta de Vigo, for example, has designed a three-part plan for players to work from home on coronavirus prevention and awareness, on fitness and on entertainment.

“We send a series of tasks out every morning,” Abalde revealed. These tasks cover everything from general fitness exercises to football-specific activities to knowledge about the history of Celta de Vigo. Just as is the case with the first-team players, the club’s Genuine players send videos of their tasks and challenges to the coaches at the end of each day.”

UD Almería has also focused on fitness exercises and on creating engaging activities for the players. As García said: “One of the challenges was for players to draw Rozam, our mascot, and we also called on our followers to do so.”

The #HakaGenuineChallenge has been keeping players busy at Real Oviedo, with players sharing videos of themselves performing the dance that has been adopted by the competition. “We’ve also uploaded videos with training routines that have been put together by our coaches and these have been useful for our players and our followers on social media,” Méndez added. “There has also been backing of World Down Syndrome Day and participation in virtual applauses.”

These three clubs demonstrate the central role that LaLiga Genuine Santander now plays within LaLiga. Across all 36 clubs, the new Panini cards can help to create a new generation of sporting heroes and take the competition from strength to strength.