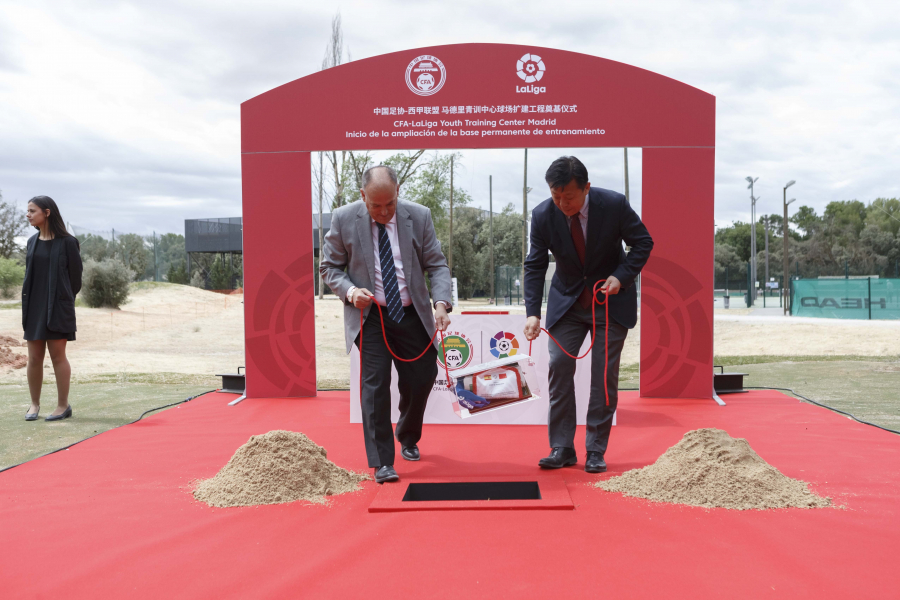 LaLiga redoubles its commitment to Chinese grassroots football in Madrid

The Chinese Football Federation (CFA) and LaLiga have announced an extension to the permanent training base for young Chinese footballers in Madrid.

The CFA-LaLiga Youth Training Center in Santo Domingo (Madrid) became the first permanent base for the CFA in Spain when it was opened towards the end of 2018. Now, with the number of projects increasing, a third training ground will be created to accommodate this growing demand.

Created to promote the development of young Chinese talents, the base provides young players and their coaches the opportunity to receive sporting, academic and cultural training based on LaLiga methods.

Speaking at the event announcing the campus expansion, Javier Tebas, President of LaLiga, described the agreement with the CFA as “the highest compliment we could receive; for the Chinese federation to trust LaLiga with their youth training projects is a source of great pride and a responsibility. For LaLiga, this agreement allows us to use our experience and past success to get closer and adapt to Chinese society."

Since the base began operating in October of last year it has provided the location for the country’s combined under-15s side, which held a long-term stay as it began its efforts to qualify for the 2020 Asian Cup. Several other teams, including the male under-17s and female under-15s, have also held prolonged stays at the facilities.

Du Zhaocai, the acting President of the CFA who also attended the event, added: “Spain has a rich footballing history so, for the CFA, LaLiga is a perfect strategic partner for the development of our youth football. We will continue to improve the technical and tactical ability of our players here, but it also serves as a cultural learning opportunity, building a bridge of union between both countries.”

This project marks the latest in the deepening relationships between LaLiga and the leaders of Chinese football.

At the beginning of 2019 an agreement was signed with the country’s top competition, the Chinese Super League (CSL), to create new training programmes for young players and coaches, as well as organising and promoting youth tournaments and friendly fixtures. The visit of the CFA to the Spanish capital, which lasted for several days, is evidence of the strong foundations that have been created with the country and the opportunities this creates for future alliances.