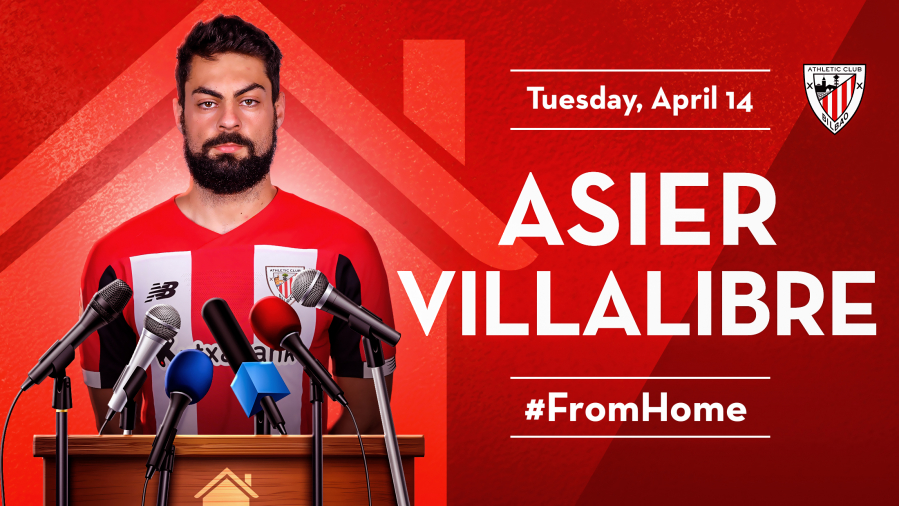 With COVID-19 now having caused a month of confinement in Spain, many traditional forms of communication have been disrupted. As league competitions remain halted, press conferences or fan get-togethers are also not taking place.

This has led club communication departments to come up with new forms of entertainment for their fans and to launch initiatives that keep lines of communication open through less traditional formats.

Many clubs have created new digital content with activities to do at home, from training routines to recipes through recommendations for books and movies, with the aim of making this period of confinement more enjoyable. Others are taking a step further in trying to facilitate conversations with key audiences, using the telephone and online platforms.

In a time of pandemic, these measures not only help to maintain a steady flow of new information. They provide an important human connection too.

Athletic Club: keeping contact with virtual press conferences
The communications department at Athletic Club has used this period to begin virtual press conferences, held online for fans and media to speak with the players, who answer questions from their home. The idea came from what the club described as “the need to keep our social following and the media in contact with our players,” while considering the reduced possibilities.

“Virtual press conferences are one of the ideas that we have launched and we post a new video every 3 or 4 days,” the club added. “This solution has been appealing to fans and the press, but we know that it is not the ideal and hopefully we can return to normal press conferences, because that will mean that the health emergency has subsided.”

"We have opened a window for fans to interact with Athletic Club players, which is often very hard to do in ordinary circumstances,” the club continued. “In addition to this we have given the media more content in a time where they may be short of new material.”

As well as providing a source of new information, Athletic Club is using its platform to transmit public health messages. "It is important to keep in mind the current situation we are all living. We must communicate, but we must also remind people the importance of staying at home and supporting those people who are fighting the virus,” the club noted.

This innovative communication strategy has led to a strong response from press and fans, in addition to showing the players in a more human way. “The players are very close people and they are doing many things - some privately - to help people,” said the club. “The Athletic Club fans are one of our greatest assets and the players are delighted to be able to spend time with them.”

Celta de Vigo: Important updates for fans and media
In Galicia, Celta de Vigo has followed a similar idea to Athletic Club, where fans use the club’s social networks to send questions for players to answer. According to the club’s communications department, these virtual press conferences have had "a very good reception from the fans, since they are hungry for content, especially if their own question is being answered."

"It is a way for fans to maintain contact with the club in spite of the confinement, which has been of particular value" the club continued. "The players have adapted perfectly as they are fully aware of the importance of maintaining the relationship with the fans and know that in the current circumstances there is no other way to do it."

This form of communication has also helped to generate content for the media, which has been of great assistance. "The press is in a moment of great difficulty with sports competitions not taking place, which means the volume of information and interaction has not been the same,” the club commented. “It is not the ideal format, but in the current circumstances this type of content is positive.”

Málaga CF: Calls to elderly fans
Many communication initiatives fulfil a social purpose as well as a commercial one. Málaga CF has shown this through a new project organised by its foundation and in collaboration with the Harena Foundation, which has spent years dedicating itself to taking care of elderly people who live alone.

The solidarity initiative 'The call of the Malaguista grandson' has led first-team men’s and women’s players, as well as coaches, families of Málaga Genuine players and members of the Málaga CF Foundation, to make phone calls to particularly vulnerable members of the community.

"These calls are a weekly highlight for both parties," said Lucas Rodríguez, coordinator of the Málaga CF Foundation. “It is not an action intended only for season ticket holders; we know there are many older people locked in their homes who have no one.”

“We are calling the people whose details the Harena Foundation passes to us,” confirmed Ana Vera, head of communication at Málaga CF, adding that the initiative is helping to make new bonds in the community. "Our player Cifu contacted a lady named Francisca and they agreed that as soon as the confinement is over they will meet and that she will come to La Rosaleda as a guest,” Vera continued. “Some very nice ties are being created.”

Sevilla FC: Showing solidarity and respect
In the south of Spain, Sevilla FC is also making the time to talk with these vulnerable communities. Its 'Take care of me' programme has been created to support the elderly and make society aware of the importance of staying home so as not to expose them to the virus. "The objective is to send a message of respect and solidarity to our elders, acknowledging everything they have done for us," explained Jesús Gómez, Sevilla FC director of communication.

Gómez added that this campaign is not the only one developed by the club, noting: “The club's social department is also contacting our members who are over 70 years old to see how they are doing, sending messages of encouragement and looking forward to future matches at the Ramón Sánchez-Pizjuán. We are doing what we can to monitor all fans who live alone or who have had or have any health complications.”

These different actions have been positively received, a fact that is proven by the social media interaction that the club is seeing, but more importantly it demonstrates the role that the club continues to play in its community. “Sevilla FC has always looked after its fans as evidenced by our annual Nervión Faithful campaign,” Gómez said. “For the past decade, we have paid tribute to our oldest fans by organising a special event for all those who have been members for more than 25 years. It’s part of our philosophy.”

During the exceptional circumstances we are currently living, these kinds of gestures take on a new level of importance. "Fans are pleasantly surprised and greatly appreciate the gesture," said Gomez, “but we have more to do. “We will continue to call and support our elders; it is a moral obligation because without their effort and contribution over the years, we would not be what we are today.”