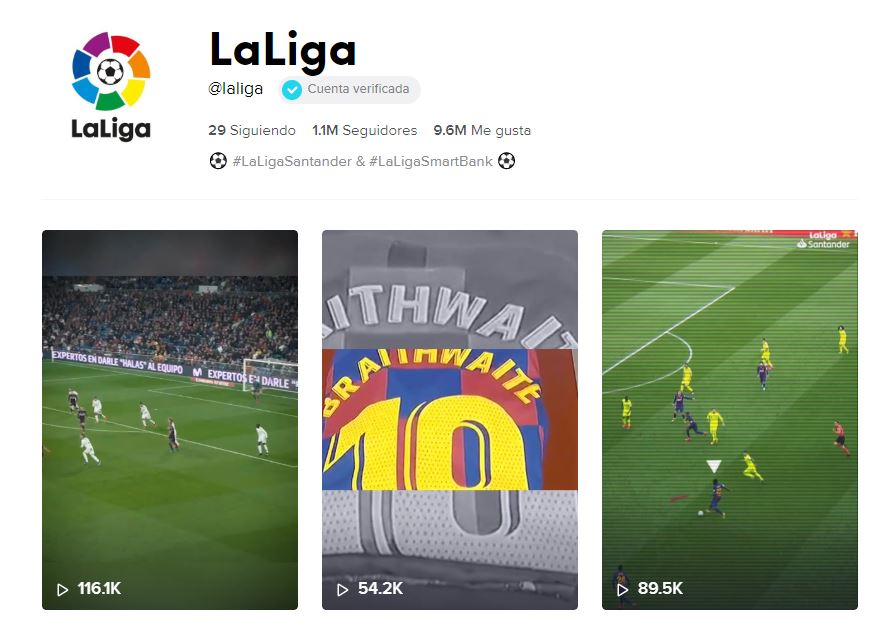 Across social media, audiovisual content is creating the greatest impact, particularly among younger audiences. In this context, it is possible to understand the explosive rise of TikTok, the short-form video which arrived on the market a little over two years ago. In this time, it has become one of the most downloaded apps in the world with over a billion active users.

As the fastest-growing social media network in the world, there is clear interest in engaging with the TikTok community and creating content that will resonate on the platform. As they look to expand their international audiences, LaLiga clubs have become heavily involved in the platform, often with the support of the league’s digital team.

Four of these clubs, Cádiz CF, Atlético de Madrid, Sevilla FC and Real Sociedad, explained the approaches they have taken and the positive effect this has had on their global brand.

TikTok showcases Cádiz CF as a global club
With LaLiga clubs becoming increasingly international, their development and growth in the digital space is becoming more important too. LaLiga SmartBank side Cádiz CF created a strategic communications plan for TikTok, where the Andalusian club has more than 17,000 followers from a wide variety of countries. “Localism isn’t enough anymore, but a global vision of what our club is and who our footballers are does work,” explained José Grima Peña, the Cádiz CF communications director. “When LaLiga opened up the possibility of joining TikTok, we didn’t even have to think about it.”

Reflecting on the novel concept of TikTok, Grima added: “There’s a major difference as it’s not the message that is the priority, but rather it’s the image. This is a social network for showcasing the best elements of each place. It’s a completely different way of communicating.”

It quickly became clear that there was a need to present an international outlook and that highlighting less mainstream activity would be successful. “We’ve come to realise that international campaigns work better than national campaigns,” added Grima. “It’s not just men’s football that captures the attention. Women’s football can even have greater interaction. TikTok is helping show that it’s not just the football that is important at a football club. A different kind of training session, a special activity or a simple gesture with the right music can go further than a news piece about who we are.”

Atlético de Madrid sees growing demand for content
At Atlético de Madrid, the club’s head of digital development Alejandro Ugarrio notes how quickly fans have embraced the club’s arrival on TikTok, where it has reached 440,000 followers already. “Our fans always respond when we launch a new official space, but in this case the reception has been even more spectacular than usual. We’re very grateful to all of the Atlético fans around the world.”

“On no other social network have we detected such a large demand for content,” Ugarrio continued. “It’s a great responsibility and, at the same time, it’s great news for us.”

In order to keep this content new and fresh, Atlético de Madrid is forging positive collaborations with players, competitions, influencers and partners while working alongside LaLiga to ensure that the account continues to grow.

“The growth in terms of the number of followers is really significant,” Ugarrio noted. “But, above all, what stands out is the view count.”

Sevilla FC adapting its tone
Sevilla FC has had a TikTok account since June of 2019 and has now passed the 40,000 followers mark. In particular, the club highlights the ways in which the posts on this network feel genuine. “The change we’ve noticed is the way that the content published is natural, much more real and less edited, plus it is generated directly on the mobile phone,” explained the club’s social media manager José Ángel Risco.

“Consumption is a lot quicker as the users want to see something that lasts 15 to 20 seconds maximum,” he added. “It’s becoming a social network that also feeds other platforms such as Twitter or YouTube, especially with videos that go viral.”

As Risco went on to explain, the audience in TikTok is quite different and this has required some adaptation. “There are differences in the tone that we don’t have on channels such as Twitter or Facebook,” he said. “Those who follow us on TikTok are a lot younger. We’re trying to connect with users who are interested in sport and in football through a tone that isn’t as focussed on the up-to-the-minute sports news.”

The club is also planning to produce more specialised content for the Chinese version of TikTok, called DouYin. It is also looking at involving influencers – both local and non-local – in their videos, perhaps by completing a challenge or by allowing them to perform a takeover of the account for a training session or a match.

Real Sociedad looking towards influencers
Real Sociedad’s TikTok journey only began at the end of October but the Basque club has over 65,000 followers already, hitting half a million likes in the process.

“We’ve seen that this is a very visual social network, so the content is different to what we publish on Twitter, Facebook and Instagram,” explained community manager Beñat Escribano. “We look to produce short and attractive videos that allow for interaction with the users and it has been positive so far.”

As with Sevilla FC, Real Sociedad is also considering working with various influencers to attract a greater audience to the account. In addition to this, Real Sociedad also occasionally participate in the weekly trends on TikTok, thereby reaching more followers.

LaLiga’s role in growing Spanish clubs’ TikTok audiences
LaLiga was one of the first major European leagues to launch a TikTok account and the league has amassed over 1.1 million followers thanks to the fun and creative videos that have been produced. As with all social networks, it is passing on its expertise to clubs who want to take advantage.

“It’s fundamental for us to be able to speak the language of our fans from around the world on social media,” explained Alfredo Bermejo, digital strategy director at LaLiga.

“We try to be up to date and TikTok is a very important new platform, he continued. “We can’t ignore this and neither can the clubs. However we are progressing well on this front, which is reflected in the strong numbers that clubs are already showing.”