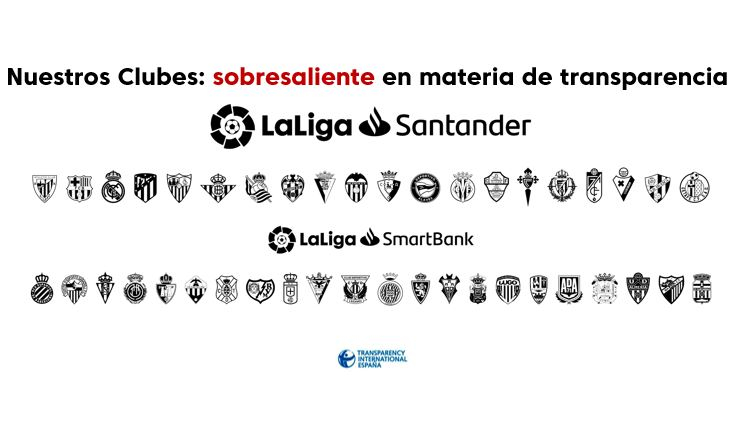 In 2015, LaLiga clubs became the first private sector entities to voluntarily subject themselves to an assessment of their corporate transparency. Collaborating with Transparency International Spain (TI-Spain), the Professional Football Clubs Transparency Index (INFUT) was created, assessing the openness of clubs when it comes to sharing information and the active promotion of transparency resources.

For the third edition of the index, INFUT 2019, clubs of LaLiga Santander and LaLiga SmartBank have achieved their best results to date, revealing a culture of transparency that has now become commonplace.

Measuring corporate transparency
The index was developed through interacting with the clubs across several stages and involves reviewing information published online in line with specific indicators.

On this occasion, the INFUT 2019 was composed of 48 indicators grouped into five areas of transparency: information about the football club; relations with partners, fans and the general public; economic-financial transparency; transparency in contracts and supplies and transparency law indicators.

The assessment centred on the publication of updated data for the 2018/19 season, placing special emphasis on the access to and availability of economic-financial information for fans and the general public.

As in previous editions, LaLiga has proactively collaborated with the creators of the index, following its own firm commitment to transparency, compliance and good governance in professional football.

Near-perfect scores across both leagues
Three years after the last edition of this index (INFUT 2016) was published, Spanish professional football clubs have made considerable advances in these various commitments.

The scores obtained by the clubs have been rated as outstanding and the collective achievement was also singled out for praise, with all participants showing active involvement and proactive commitment to improving the quality of the information published.

For INFUT 2019, LaLiga Santander and LaLiga SmartBank clubs obtained an average overall score of 93.63 points out of 100. This progress shows a significant from the 2016 edition, where clubs received a score of 62.80%. A total of 38 clubs scored above 80% in their individual assessments, compared to 12 in the previous index.

This progress is reflected across both LaLiga Santander (97.55% average score) and LaLiga SmartBank (90.06%). In LaLiga Santander, 12 of the 20 clubs received a score of 100% in INFUT 2019, while every club exceeded a score of 80%. With some of these clubs scoring below 50% three years ago, the new scores show a marked improvement to improving processes across the organisation.

Similarly, while only three LaLiga SmartBank clubs achieved a score of over 80% in 2016, 18 have now achieved this milestone in the 2019 edition.

The results underline that clubs are increasingly aware of the social expectations for transparency and their role in wider society, dedicating resources to making organisational information more accessible. It also proves that rather than economic or structural factors, good transparency depends on the commitment of club employees and their governing bodies to building a culture of compliance.