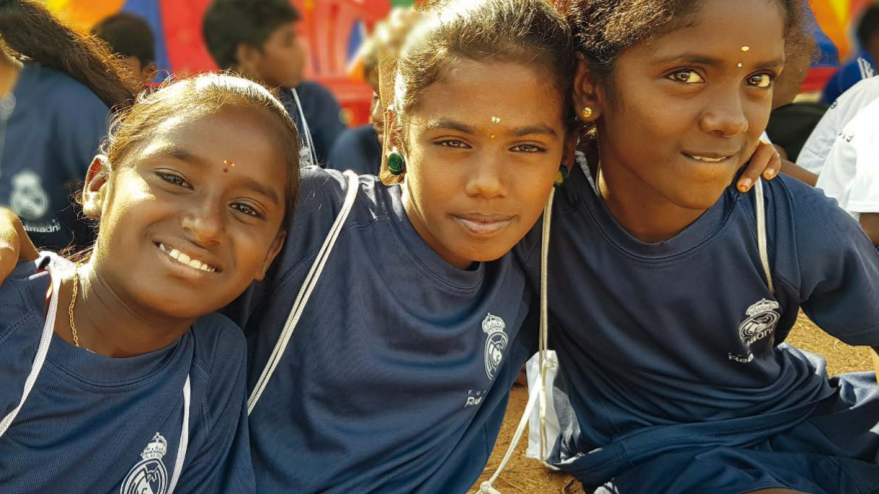 Many large companies form links to the world of sports for the global exposure it offers. But beyond the pure numbers behind a sports sponsorship, there is an emotional element to football that creates a special kind of bond.

For many fans, a football club is a lifetime commitment that does not just represent sport. In many cases, fans build their identity around their club and what it stands for. For this reason, clubs are expected to show their links to the local community and society to further engage their fanbase.

By expressing the same social values, club partners can build similarly strong connections to these fanbases, bringing commercial as well as social benefits.

The soul of Real Madrid
Commercial partners entering the world of sports are increasingly directed towards the social, according to Julio González, managing director of the Real Madrid Foundation. “Social sponsorship and marketing gained strength in recent decades, especially with the 1999 UN Global Compact,” he said. “This is building on interest that has always existed in the Anglo-Saxon world, particularly in areas like cultural philanthropy and scientific progress.”

Real Madrid’s social objectives are based on disadvantaged groups and childcare, with a broader focus on autonomy, equality and solidarity. Much of this work is led by the Real Madrid Foundation, which González describes as “the soul of the club.” But whether on the pitch or via commercial activities, the club aims to show that teamwork can help accomplish even the most difficult challenges.

“Each communication of the Foundation's actions and projects represents a reinforcement of the Real Madrid brand image, its global presence and its commitment to permanence and commitment to the communities in which it operates,” González said. “Club sponsors add to those values  by becoming partners and allies of social action.”

For González, football is a natural fit for brands looking to promote these values as the sport is heavily based on emotions and social togetherness. “Many brands are driven by a desire to help the less fortunate and this is what leads them to make their social commitment visible,” he added. “Companies are made up of people, after all. Football is very aware of these issues and clubs are increasingly becoming part of the solution.”

SD Eibar: CSR is here to stay
Elisa Mangado, director of the SD Eibar Foundation, noted that the values of the club (including commitment, respect and humility) are reflected in its day to day work and should be present among club sponsors too.

"Our projects are selected based on our values,” she said. “With our grassroots football for example, we have around 500 young people who spend years in our academies and we want to train them not only as athletes but also as people. It is essential for us to partner with companies that want to help give back to society what is has given to us.”

Beyond signing new agreements, SD Eibar also wants to use its considerable profile to increase the impact of new social initiatives. “Football clubs are great platforms with a high impact and therefore, we want to make the social work that we do together with our partners very visible,” she insisted. “We can also contribute to the CSR programmes of our partners.”

This sense of social awareness is becoming more integral within the sports industry and Mangado sees the change as permanent. "Business sustainability and corporate responsibility is here to stay," she said. "Social projects are valued very positively in commercial relationships. It is vital that all actions, partners and companies that associate with each other now include that social vision that is so demanded.”

Levante UD: The social return on investment
Vicente Herrero, director of the Levante UD Foundation, believes that social sponsorships are not only likely to become an essential part of commercial strategy but will soon become easier to measure.

"The Levante UD brand obtains tangible value through the actions that we develop in person with some of the sponsors,” he said, citing the club’s regular workshops with employees, players’ families and partners which promote the club values of effort, humility and personal transparency.

“The real value that this brings to brand is often intangible,” Herrero continued. “We have begun to work on a SROI (Social Return on Investment) model that sponsors can use. In most cases, the emotional value achieved through social actions is enormous.”

Current Levante UD initiatives include bringing fans together different parts of the club, including women’s football and its Football School for People with Intellectual Disabilities (EDI). “During the pandemic, videoconferences were established with the Levante EDI athletes, in which the players of the first team participated in the same way, “Herrero explained. "Online working groups were also held among all the athletes, sharing values and concrete work plans such as: healthy habits, food and training at home."

Global commitment to society
In Herrero's opinion, the future of company collaborations and sponsorships will be linked to CSR programmes. "In the short-term future social sponsorship will become an important part of marketing and business development departments,” he said. “More and more, companies want to be participants in social actions that reach the general public and their target influential groups like fans, employees and suppliers."

“LaLiga clubs and foundations must lead projects from real commitment,” he concluded. “We have an obligation to the enormous social mass that supports us and to the fans. Football is the most powerful sports tool to convey tangible values and offer our sponsors social programmes that drive intense connections."