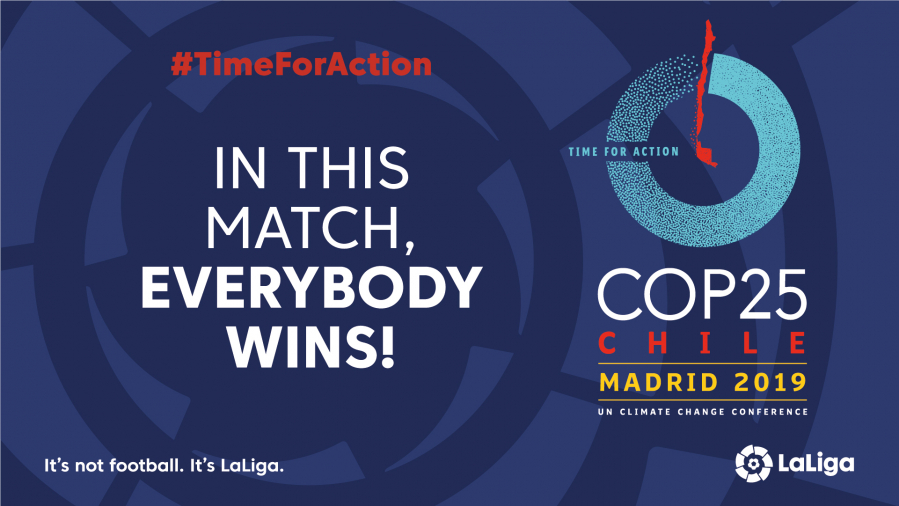 The COP25 Climate Change Conference was held in Madrid from December 2nd to December 13th and was supported by LaLiga as part of the league’s efforts to promote sustainability. LaLiga promoted the work of the conference by launching a series of actions over the course of matchdays 15, 16 and 17 of the 2019/20 LaLiga Santander season, the weekends that coincided with the event.

From awareness-raising messages on stadium advertising boards in multiple languages to the placing of the COP25 emblem alongside the LaLiga logo, Spanish football fans in the stadiums and those watching TV broadcasts could see the league’s show of support for the conference and its cause.

This follows on from the Fair Play Social project that LaLiga and its charitable foundation have been working on over the past two years, incorporating social responsibility practices into the institution's existing business management model. Already a total of 22 professional clubs have participated in this programme and teams are working towards the five keys to sustainability: awareness campaigns, efficient waste management systems, carbon footprint reductions and offsetting, partnerships with environmentally committed companies and responsible energy use.

Responsible club initiatives
The results of this can already be seen in various club initiatives. Real Betis, for example, has taken a major environmental step forward by announcing that it signed up to the United Nations' Climate Neutral Now campaign. In doing so, the Andalusian club made a commitment to reduce greenhouse gas emissions and to offset the rest of the club’s emissions.

In Galicia, Celta Vigo has launched a new recycling initiative that separates waste at the club's social headquarters, at the club’s Balaídos stadium and at the A Madroa training ground. Meanwhile, Real Sociedad fans are given biodegradable boxes to put the shells of the sunflower seeds that are typically eaten during Spanish football matches.

Real Zaragoza is offsetting its carbon footprint by making donations to reforestation projects in Nicaragua based on calculations of its carbon emissions from travelling, which are kept as low as possible due to its use of buses and trains for away matches in mainland Spain rather than using air travel.

Signing sustainable deals
Other examples from around Spain show that clubs are making forward-thinking partnerships to protect the environment. Deportivo La Coruña has signed a new sponsorship deal with Ecoalf, a firm that manufactures top-quality clothing from recycled materials, including the Galician club’s kit. As such, Deportivo is the first club on the planet to be kitted out with sustainable strips made from recycled ocean waste.

Athletic Club’s San Mamés Stadium, meanwhile, has become the first football ground in Europe to be awarded the Leadership in Energy and Environmental Design (LEED) certification.

The league itself has been agreeing partnerships, with LaLiga signing a deal with Ecovidrio, the charity organisation responsible for the recycling of glass waste in Spain. The two are now working together to promote a glass recycling campaign, continuing LaLiga’s vision for a more sustainable football industry and for a more environmentally friendly world in general.