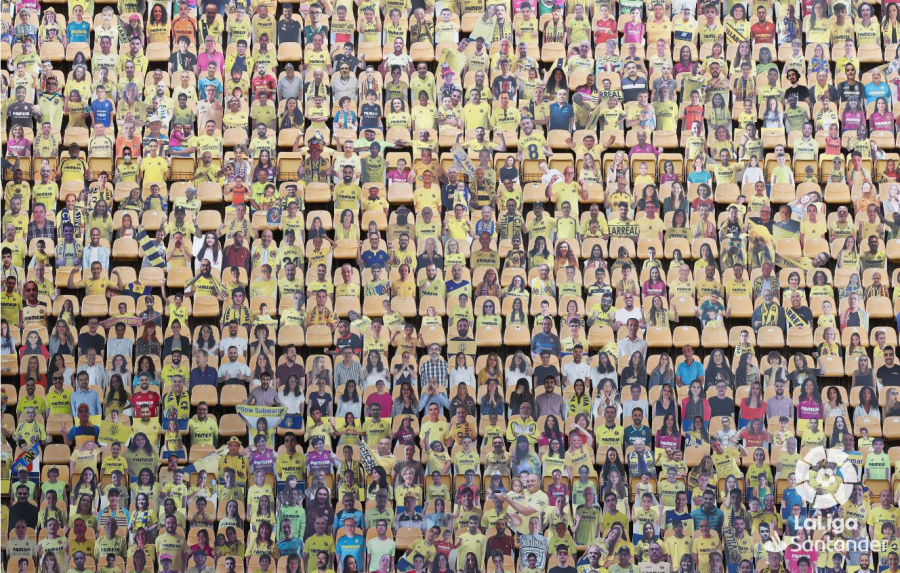 While games continue to be held behind closed doors, fans of LaLiga are following the action from home. But while fans are not attending the stadiums, LaLiga and its clubs have designed a range of different initiatives to ensure their support is still being felt.

From life-sized fan photos in the stands to applause being heard during the match, audio and visual elements have been used to help create a unique experience for the players and strengthen connections between clubs and their fans.

"It's the time to be united and together,” the Elche CF communications department said of these campaigns. “Our fans are the driving force behind our club and we want them to be part of this exciting time.”

Elche CF’s fan photo initiative goes global
At Elche CF, more than 600 polypropylene, fireproof and hard-wearing templates were printed with fan photos and assembled inside the ground for the club’s first game after the return of the competition.

"Season-ticket holders were the first group to be given this option because we felt they had to have the chance to be close to the team,” the club noted. “Members of our supporters' groups were also among the first to be informed and consulted on this initiative.”

"We've had many requests from football fans, in general, who want to be part of this. The idea was first launched by Bundesliga club Borussia Monchengladbach, with whom we've developed an excellent relationship off the back of this initiative."

Elche has confirmed that fans from anywhere world who would like to get involved, whether they are season-ticket holders or not, can now register for a photo to be displayed via www.invencibles.elchecf.es. "It's been so well received and has had such a big impact in the press that we've set up a 'media zone' for photos of renowned media professionals, journalists, YouTubers and influencers," the club continued.

A new experience for players and fans
For those on the pitch, Elche CF’s efforts have been well received too. “Players and coaching staff have thanked the club for putting different initiatives in motion," the club stated. “Being able to look into the stands and see our fans is a source of motivation for the players. They have loved it."

All photos are located in the 'Rincon del Aficionado (Fan Corner)’, which the club noted is "a space where there will also be banners and scarves as a showing of support."

"It's a way of keeping the fans close,” the club added. “After everything we've lived through, we need to be united and our team won't be alone. We have tried to be proactive at all times and the aim is to continue down this path. The Elche faithful will be right behind our players, as always."

Fan photos fill Villarreal CF’s Estadio de la Ceramica
Further north in the community of Valencia, Villarreal CF has created a similar campaign, with images of supporters adding colour and filling the stands for the team's first game back on home turf.

The #UnitsMesQueMai (More United Than Ever) campaign allows the Groguets, a term by which Villarreal fans are commonly known in Spain, to be closer to the players.The response has extended as far as former players, with ex striker Cedric Bakambu, who currently plays for Beijing Sinobo Guoan in the Chinese Super League, adding his photo to feature among thousands of Villarreal CF fans.

Reale Seguros’ special billboards and Valencia CF brings Mestalla to life
The absence of supporters in the stands has not prevented Valencia CF from developing initiatives to bring colour and liveliness to the famous Mestalla stadium. With the aim of recreating an atmosphere that is as similar as possible to the normal matchday experience, fans have placed their shirts, flags, scarves and other objects on the seats as a showing of their support. In addition, the big screens at Mestalla will display messages that are sent in through social media using the #AMUNTWorld hashtag.

Elsewhere, advertising space will be used to give fans a new role inside the stadium. Club partner Reale Seguros has donated digital billboard space to display fan photos during live matches. This can be seen at the stadiums of Real Sociedad, Real Betis, Getafe CF and Real Zaragoza.

LaLiga's Applause to Infinity inside the stadiums
At LaLiga, the health crisis triggered by the coronavirus has prompted the creation of an everlasting tribute to the everyday heroes fighting in the frontline against the pandemic. The Applause to Infinity initiative aims to honour these individuals during every match.

By capturing the applause of LaLiga fans from around the world, a single audio track has been created that is played inside the stadium during the 20th minute of every LaLiga fixture. Lasting for 30 seconds, it provides a moment of recognition, as well as a new wave of encouragement to the players, who are reminded that the world is watching.