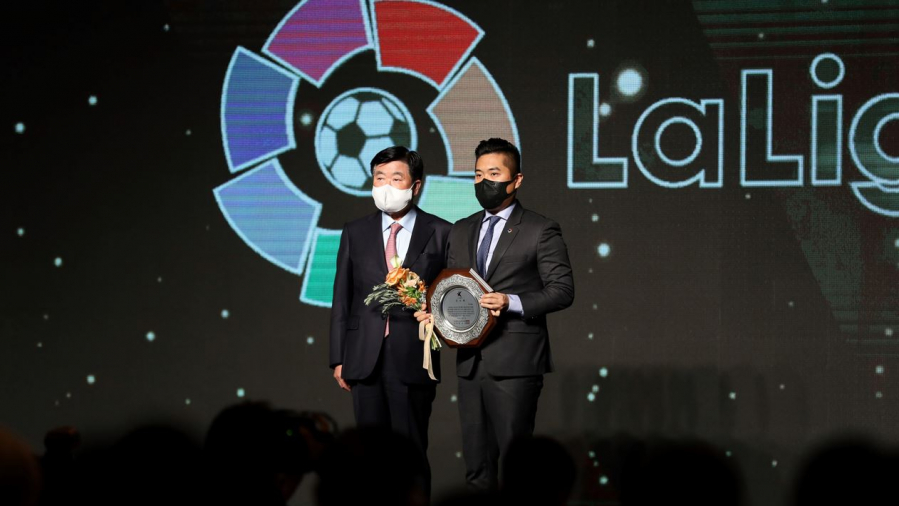 LaLiga, awarded in South Korea and the USA

LaLiga has recently received two international awards. These awards have been received by the K League in South Korea, in recognition of having contributed to the development of its local football, and in the United States by Front Office Sports, which recognises the company as one of the best employers in the sports industry. These two awards shows that, regardless of the field of action, LaLiga is a benchmark in everything it does.

Sangwon Seo, LaLiga's delegate in South Korea, received the award for the organisation that has contributed the most to the development of the K League, the South Korean league, in 2021: “For LaLiga it is an honor to receive this award. One of our main goals, within our international strategy, is to help local leagues and clubs to grow and advance in their projects, which is why we consider this award as a recognition of that work that, in addition, encourages us to continue improving each day”.

In a ceremony held in Seoul, LaLiga received the award from Kwon Oh-Gap, K League’s president, who valued the contribution of the Spanish championship to the development of the South Korean league. Speaking about the award, a spokesperson of the K League said: “we would like to express our sincere thanks and appreciation to LaLiga. LaLiga has and is contributing to the development of our youth education programme and sharing their knowledge on the economic control system based on practical experience. Now we expect to build a deeper relationship and further the development of both leagues”.

On the other hand, LaLiga has been named one of the Best Employers in Sports by Front Office Sports in their third annual survey. This recognition is given to organizations in the sports industry who excel in leadership, commitment to diversity, equity and inclusion, employee relations, and philanthropy.

Established in 2019, the honor is determined based solely on employee feedback. Thousands of individuals from across the sports industry contributed to the survey which identified the ‘Best Employer in Sports’ list.

“We are very proud to receive the Best Employers in Sports award from Front Office Sports. Every day in LaLiga we work with ambition towards our objective of growing our competitions in Spain and across the world. This wouldn’t be possible without the passion and effort our employees show every day. We are committed to a culture of continuous improvement in which we give our best for each and every one of the 42 clubs in LaLiga Santander and LaLiga SmartBank,” said Oscar Mayo, Executive Director of LaLiga.

LaLiga joins 29 other winning organizations representing the top 15 percent of all sports industry companies that participated in the third annual survey, across multiple sectors within the industry, including agencies, brands, teams, governing bodies, leagues, tech, media and more.