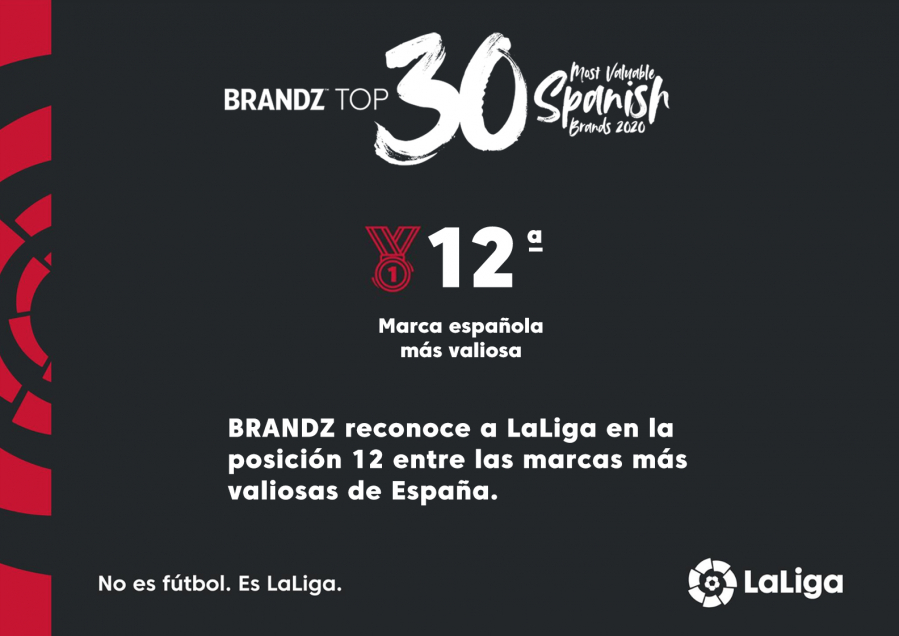 LaLiga has become the first sports competition to appear in the BrandZ ranking of the most valuable Spanish brands in 2020.

Carried out by Kantar, the study ranks LaLiga as the country’s 12th most valuable brand. Furthermore, LaLiga’s commitment to world-class production and TV spectacle has seen the organisation classified not as a sports competition, but an entertainment company.

The Kantar table ranks each company according to its financial value combined with an evaluation conducted among a representative sample of Spanish consumers. This analysis sets LaLiga's brand value at $1.6 billion, establishing LaLiga as one of the highest new entries in this year’s table.

Zara tops the Spanish ranking for the third consecutive year, followed by Movistar and Santander. In addition to LaLiga, two other brands managed to appear in the rankings for the first time: Desigual and DIA.

"Securing a place in the BrandZ Spanish brands ranking is not an easy task, since it tends to be tremendously stable, so getting a place is a true recognition of a job well done for any brand who achieves it,” said Ricardo Pérez, research director of BrandZ Spain at Kantar.

“In LaLiga’s case, entering as high as 12th position is a remarkable feat and we believe that part of this success is down to its sheer hard work in the area of innovation, a fundamental value for any brand’s growth. In LaLiga's case this comes from a diversification strategy fully aligned with its DNA, positioning and the needs of its consumers."

From sports to entertainment
With a stated aim to become the world’s best entertainment brand, LaLiga’s classification in the BrandZ ranking is a new milestone. It is also the only sports competition in the ranking, showing the potential for other clubs or competitions to make the same transition.

Eva Lopez Ruiz, director of Global Brand and Assets at LaLiga, commented: “Managing to appear in the BrandZ Ranking, as well as in the entertainment category, is a huge plus for LaLiga. We have worked for a long time to be more than football; we are innovation, technology, passion, emotion… LaLiga is entertainment and it’s important that companies like Kantar also see it that way.”

To view the entire ranking, click the following link.