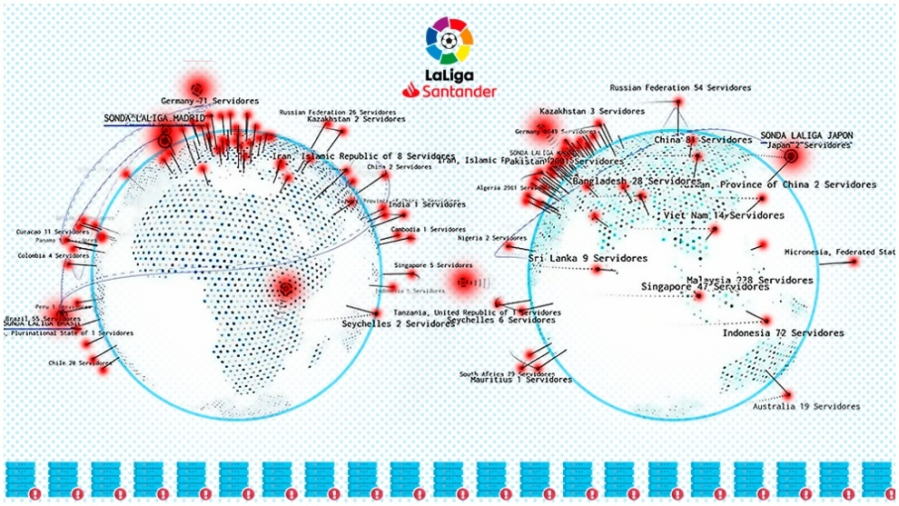 The fight against audiovisual piracy is one of LaLiga's priorities, with the aim of protecting its product and defending one of the clubs' biggest assets: audiovisual rights.

To do so, it has developed a range of its own technology tools including Marauder, Lumière, Blackhole and Neko. These tools have sparked the interest of public and private organisations, which have turned to LaLiga in search of its knowledge and experience in the fight against audiovisual piracy based on three spheres of action: technology, legal and communications.

The positive results achieved in recent years have convinced companies to continue to place their trust in LaLiga.

This month LaLiga confirmed its status as the global benchmark for protecting audiovisual content with the renewal of its agreements with Dorna Sports and the Belgian Pro League, along with the recent agreement struck with Sky Sports in Mexico. In addition to this, a new collaboration in Italy has led to the blocking of five piracy sites which had been receiving more than a million monthly visits in the country.

Renewing partners Dorna Sports and Jupiler Pro League
LaLiga’s antipiracy collaborations first began with the Jupiler Pro League, the top tier competition of Belgian football, in February 2017. This agreement has now been extended until June 2023. Meanwhile Dorna Sports, the organiser of the Moto GP and World Superbike competitions which began working with LaLiga one year ago, has extended its partnership until February 2022.

In both cases, LaLiga offers services including the monitoring and removal of content on social media, fake social media accounts, mobile apps in official app stores and the deindexing of URLs hosting illegal streams and IPTV platforms which offer the competition illegally.

“The championships that we manage from Dorna; MotoGP and WorldSBK have benefitted enormously from the different tools created by LaLiga's technological protection team, which is a global benchmark and, therefore, a guarantee of safety for our competitions,” said Manuel Arroyo, general director of Dorna Sports.”

Leander Monbaliu, CBO of Jupiler Pro League added: "The fight against piracy has no end, but by taking advantage of technology developed by LaLiga, we are well equipped to protect our product, our rights holders and our game. The renewal of our cooperation was evident, given the encouraging results we have seen in recent years.”

New collaboration with Sky Sports Mexico
Adding to LaLiga’s list of partners, Sky Sports Mexico has now begun a specific agreement in the field of baseball for monitoring the Mexican Pacific League. To do so, a laboratory has been set up in Mexico and local staff have been hired and trained to manage the activity, coordinated by LaLiga in Madrid.

“Sky’s commitment in the fight against piracy is absolute and every effort will be made,” commented Juan Carlos Muñoz, Director of Programming and Content at Sky. “With the support of partners like LaLiga and the internal experience in our team, we will undoubtedly achieve better results every day.”

"The scourge of piracy not only affects football, it affects sport as a whole and the world of culture,” added Javier Tebas, LaLiga President. “At LaLiga we're delighted to see how our investment in antipiracy technology is not only helping to protect our clubs, but also content creators such as Dorna Sports, the Jupiler Pro League and the Mexican Pacific League."

New blow to piracy in Italy
Also this month, LaLiga has obtained the recognition of the regulatory body Autorità per le Garanzie nelle Comunicazioni (AGCOM) for the right to protect broadcasts in Italy.

LaLiga requested the blocking of five offending websites between October 2020 and January 2021. The traffic between all these pages had been exceeding one million total visits per month in the country. With the blocking request now carried out, the AGCOM has granted LaLiga the right to protect its broadcasts in Italy, benefiting local rights-holders among others.

Other global collaborations
As one of the most viewed competitions internationally, LaLiga matches can generate a large increase in pirated videos. For this reason, six years ago the league began the process of developing its own technology to combat, immediately and effectively, the new sources that may arise. Its tools are now available to other sporting and entertainment organisations around the world.

In all countries where LaLiga has carried out measures to protect its content, it works in coordination with local entities and other rights holders seeking the same objective. Many of these actions have been carried out thanks to the support of local broadcasters and the anti-piracy coalitions to which LaLiga belongs. As a result, video removal rates reported by LaLiga are above 95% on most social networks.

Emilio Fernández del Castillo, director of operations of LaLiga Content Protection, explains that “10 years ago we were fighting against illegal websites and now we are dealing with social networks, apps and IPTVs. As new platforms emerge, we have the ability to develop the tools to fight against it.”

In Europe, countries such as Denmark, Italy and Russia have been able to obtain favorable resolutions through working with LaLiga. Other regions where LaLiga activity has led to important achievements include the Middle East, Africa and Latin America, specifically in countries like Peru, Uruguay, Ecuador or Mexico. Likewise, LaLiga works in the Asia-Pacific region jointly with other industry players in countries such as Malaysia, Indonesia and Singapore.

“We are optimistic about the fight against piracy,” added Juan José Rotger, manager of global content protection at LaLiga. The reality is more favorable now than it was a few years ago but, although we are seeing getting good results that reduce piracy levels, we cannot relax.”