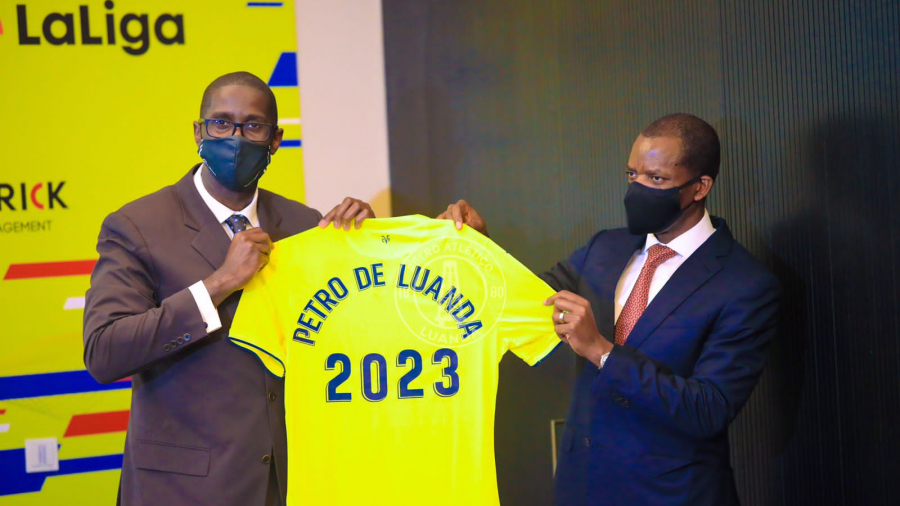 LaLiga reinforces its international leadership in football management by engaging in a Strategic Business and Commercial Development Consultancy Project with Angolan and African powerhouse Atlético Petróleos ‘Petro’ de Luanda, aiming at sharing the best know-how and best practices regarding strategy and commercial development with the Angolan giants

The agreement between LaLiga and the Angolan club was presented and had the presence of VIP guests such as High Officials from the Ministry of Youth and Sports, important executives from some of the most prestigious companies in the country as well as representation from the Spanish Embassy in Angola.

Speaking from Madrid headquarters Javier Tebas, LaLiga’s president, highlights his satisfaction as the project provides a great opportunity to contribute to Petro de Luanda’s growth and overcoming of the forementioned local challenges.

Tebas also praises Petro’s Board as, in his own words, “They have shown a lot of maturity by committing to this project, an initiative that also confirms how important consultancy, educational and training efforts are for LaLiga’s main ambition of contributing to the development of a strong and sustainable global sports industry”.

The Consultancy Project, divided in three stages, will run for 2 years, and will be centered around different business areas. Focusing on the Optimization of the Commercial and Marketing structure of the Club as its first pillar, the project will transition to a Data and Fan Engagement Management phase, which will conclude in a Business Development stage of analysis, reorganization, redefinition, and creation of new commercial assets which will allow the Angolan club to create better opportunities to drive revenue through improved sponsoring and licensing programs that shall be more appealing to brands.

Tomas Faria, Petro’s President who has played a key role in the agreement, affirms that “This project aims at helping Atlético Petróleos de Luanda achieve one of its objectives which is to improve its financial autonomy, being that the goal set for the year 2024 is to have 20% of the revenue coming from the clubs’ direct operations”

To execute such forward-looking initiative and align the results with Petro de Luanda’s ambitions, LaLiga has created a winning team which, aside from its local structure and head quarters’ internal departments, will also count on Villarreal CF and Angola’s leading sports marketing agency Hattrick Sports Management. The Yellow Submarine, already an amazing international success story, will provide great examples in terms of fan engagement and commercial initiatives as well as one-to-one sessions for Petro de Luanda’s area managers.

The current Europa League’s Champions are very excited about this opportunity, as former Euro 2008 winner and Villarreal’s Director of International Relations, Marcos Senna states “From the moment that LaLiga approached us for this exciting project we bought into it and supported it 100% as we believed that our knowledge and experiences could be very useful for Petro and the sports industry in Angola”

As for Hattrick Sports, the local actor will add value by guaranteeing the best adaptation and implementation of LaLiga’s directives and knowledge to the local context thanks to their great know-how and relationships with the strongest brands in the market.

One of the most differential factors that LaLiga will offer is, according to Oscar Mayo, “Transforming information into knowledge to generate more business opportunities”

LaLiga’s Executive Director, Mayo also states that training will also be great added value, as working with Petro de Luanda daily will create a framework to train the clubs’ personnel, providing them with the best international knowledge complemented by a permanent contact with our departments and professionals.

With this agreement LaLiga shows its commitment with the Angolan sports industry by assisting in, according to Edmundo Endje LaLiga’s Delegate for Angola, “The definition of a new paradigm that helps to create more sustainable clubs, turning them into more profitable business units that are appealing to brands and investors”

Founded in 1980 and having Sonangol, Angola’s national oil company, as its main shareholder, Petro de Luanda has millions of fans to add to a very rich sports history in several sporting disciplines, a strong brand and an ensemble of assets that give the club an edge over their competitors in a market, Angola, that has been severely hit by a heavy national currency devaluation and the pandemic.

LaLiga hopes that the Strategic Consultancy Project with Petro de Luanda becomes a road map not only for the Angolan sports sector but also a strong success story to inspire an African Continent that seems to need this sort of examples.