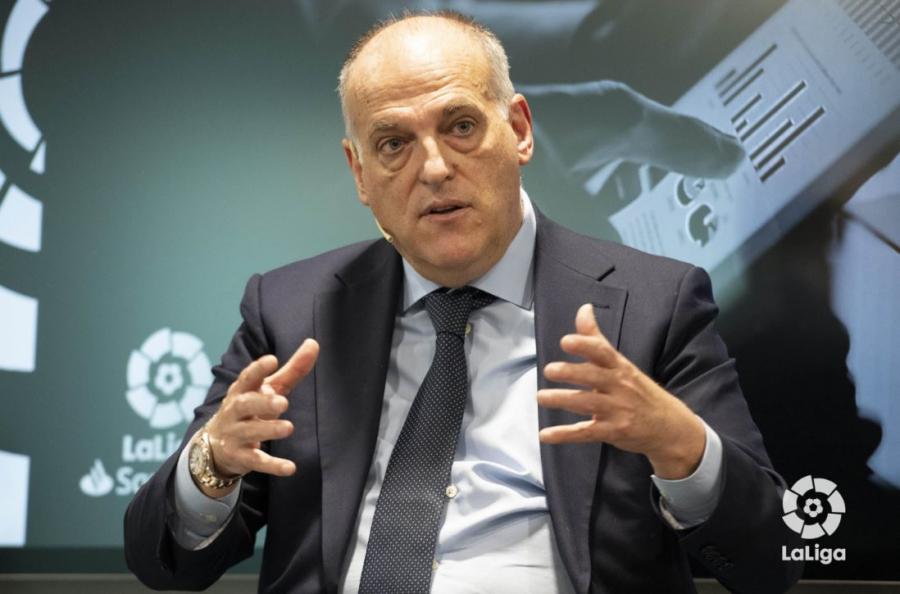 Javier Tebas: LaLiga is working on a 10-year plan to secure the competition’s growth

The effects of the coronavirus pandemic require action in the football industry but should not detract from long-term growth planning and exploring new revenue sources, LaLiga president Javier Tebas has explained.

During a keynote interview at World Football Summit Live on November 26th, Tebas outlined LaLiga’s long-term plans which will centre on LaLiga’s growth in the digital sphere. The emerging revenue streams from this area will be vital, he insisted, for the medium and the long-term health of the industry.

“We’re already working on a 10-year plan,” Tebas revealed. “There’s already an understanding of what’s coming with regards to audiovisual rights, to technology and to over-the-top (OTT) platforms, which are here to stay. All of this means there’s a need to make plans for a long-term period of transition.”

“I think over these next 10 years, the most important thing for us will be the digital ecosystem,” he continued. “We’ve been working on our digital ecosystem for several years and have invested a lot of money in this, in the likes of OTT and anti-piracy.”

These investments, Tebas said, are needed because the value of audiovisual rights may not continue to grow at same rapid rate of the past decade. The slowdown in this market could be seen even before the coronavirus pandemic. For Tebas, this underlines the need to turn to digital for alternative revenue streams.

“There are other sources of revenue that we’ve been working on over the years that can be significant and that we think can help us complement the growth [in audiovisual rights income] that might not be two-digit growth,” he continued. “There’s the digital sphere, there’s OTT and other types of products that you can offer to fans around the world.”

As well as creating a platform for these sports, this has offered a wealth of useful information to LaLiga ahead of a decade in which OTT could become the three most important letters in the football industry.

Discussing whether LaLiga would ever consider rolling out its own version of the NBA League Pass digital subscription service, the President replied: “Certainly. It’s a clever model for a competition’s growth. We’re already working on it and are in an advanced stage of a possible LaLiga Pass.”

Rather than competing with broadcasters, Tebas explained that such an offering would be designed to complement existing partnerships. “LaLiga Pass is a product that would be adapted for each territory in the world and that can be offered in collaboration with the audiovisual broadcaster in each territory,” he said.

“It’s a product that could be directed at people who really like LaLiga, the super fans, but are living in a territory where the broadcaster only shows a few matches and some highlights. You would be giving these fans more of what they want, which will help the broadcasters to have more value.”

At the heart of any digital growth, there will be a need for good data capture and analysis, Tebas continued. “If you don’t have a good OTT and good artificial intelligence for all your data, then it won’t help your broadcasters much,” he said.

LaLiga’s coronavirus response: Mobile dressing rooms and new PCR tests
While long-term planning remains vital, the short-term challenges of the coronavirus pandemic remain significant. LaLiga has been at the forefront of this battle and has offered insight that is benefitting the football industry as a whole.

For example, LaLiga identified that dressing rooms had serious potential for outbreaks and restricted their use. At the same time, especially in winter months, players want to shower after a match. In response, the league is beginning to install various mobile dressing rooms in stadiums that can be used by small groups.

LaLiga has also been working with its diagnostics partner SYNLAB to trial new and less invasive PCR tests that will make life more comfortable for the players.

In terms of the immediate financial health of the clubs, LaLiga has also adjusted its economic controls to ensure that Spanish football manages the setbacks of the pandemic responsibly.

“Reading the accounts from last season, many small- and medium-sized clubs are still turning a profit in spite of the coronavirus situation,” Tebas said.

“Next year, there will be profits too because of our economic control. LaLiga, in collaboration with the clubs, decides ahead of time how much can be spent, based on income.”

“This had to be a transition year in the sense of signing players,” he concluded. “But these are the responsible measures to take if we are going to meet our collective long-term objectives.”