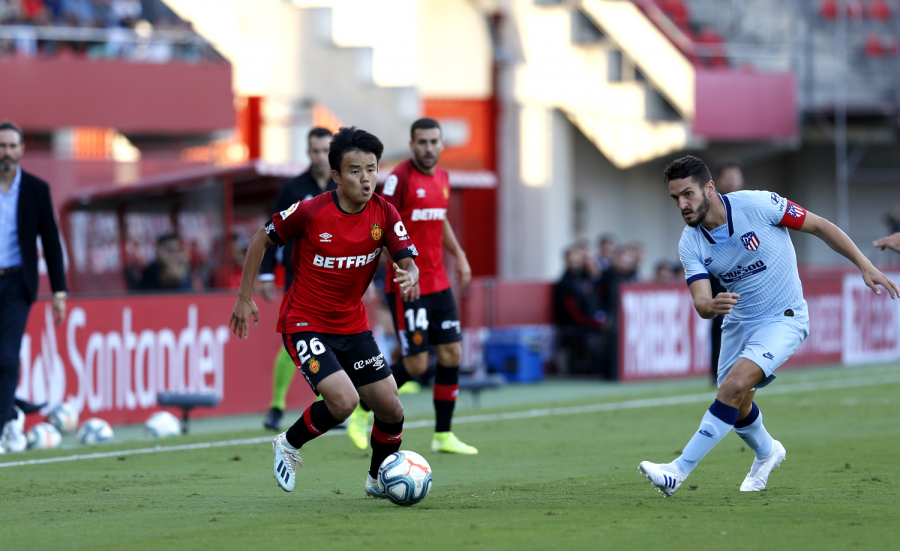 With the closure of the transfer window, teams are looking to make the most of their new additions. There are many footballers who from day one amaze fans with their skills while others need more time to adapt. Some players also carry significant off-field appeal which can help their clubs. This is certainly the case with the Japanese players who have arrived in Spain this summer.

The passion in Japan for LaLiga is huge and the number of Japanese fans who follow the Spanish top flight is increasing. That’s why the LaLiga clubs have seen major impact following the recruitment of Japanese footballers who bring followers to their social networks, boost TV audiences and, of course, offer their talents on the pitch.

Kubo sends RCD Mallorca's social media into a frenzy
Japanese fans boost clubs’ social network figures and a good example of this is at RCD Mallorca, which has felt the impact of Take Kubo's signing on its social media channels from the day he arrived. "The impact of Take Kubo has been amazing on the three social networks with which we mainly work: Twitter, Instagram and Facebook,” commented says Alberto Salas, the club’s Director of Communications.

“Between August 21 and August 25, the days following his signing, we gained 11,200 followers on Twitter, 8,300 on Instagram and 2,100 on Facebook. The video in which we announced his signing reached 1.3 million views on Twitter and is the tweet that has had the most interactions on our account ever, with 8,600 retweets and almost 25,000 favourites," he added.

Kubo is an icon in his country and his signing has been the cause of great excitement among Japanese fans. This has already led to the club considering the possibility of launching "a Japanese social media account" and in the short term also "launching a Japanese podcast explaining how Kubo prepares for matches and his involvement in games," Salas noted.

Mallorca is wasting no time and are already working on brand positioning in Japan with "a delegation from Mallorca that travelled to Japan and had the help of LaLiga and their delegate in the country, Ruben Gonzalez." Meetings with all kinds of companies in the advertising and communication sectors were successful because "Japanese companies showed their readiness to help."

SD Eibar: Inui's return has another very positive impact
Takashi Inui re-signing for SD Eibar, following his spell at Real Betis and Deportivo Alavés, has given the club’s social media networks a shot in the arm. "Inui's return had a very positive impact on our social networks,” explained the club’s Director of Communications, Unai Artetxe. “On the day of the announcement of his return, July 24, we were the third LaLiga club with the most interactions on Twitter, and yet we have the smallest number of followers. The Japanese account has been boosted by 250% since Inui’s arrival," he commented.

Eibar is nothing new for Inui, as the player had already spent time at the club, having first joined in 2015. "His signing opened the doors to a new market for us. After we’d previously gained knowledge of that market, and in collaboration with LaLiga, we were able to obtain profitability in Japan. In fact, we signed sponsorship agreements with various Japanese companies during his time here."

"Inui will carry on being important for the international strategy that we carry out, but the club always comes first", says Unai. "We want Eibar to be known and recognized, and logically players are the ones to do this. Takashi is still an idol in his country, and obviously we must take advantage of his presence to continue to grow."

Kagawa signing makes an international impact
Shinji Kagawa has signed a contract with Real Zaragoza for the next two seasons, moving from Borussia Dortmund. His signing had an immediate impact on social media and Zaragoza picked up 3,232 followers on Instagram, more than 2,569 on Twitter and nearly 400 on Facebook. On Instagram the five videos the club uploaded on the day of Kagawa’s arrival reached 122,000 views, to go with the 237,000 views the video of the official announcement of the transfer had on Twitter. As for comments, the number totalled 2,657 on posts related to Kagawa’s signing, with the official signing photo being the most commented with 1,554 posts.

"After the excitement of the first weeks, these numbers continue to grow steadily and consistently,” said Carlos Arranz, Commercial and Marketing Director of Real Zaragoza. “Interactions have grown, especially in those publications where Shinji is the protagonist or where his image appears. The challenge is to continue growing by winning the loyalty of these new followers."

The news of the signing, which was a trending topic on Twitter, didn’t go unnoticed by Spanish national newspapers. News also reached the English media, with The Sun publishing an article titled 'Former Manchester United player Shinji Kagawa signs for Spanish club Real Zaragoza' and the German media, with Bild writing a piece titled 'Shinji Kagawa has found another club. It’s a surprise – he has gone to LaLiga SmartBank, to Real Zaragoza.'

The arrival of Kagawa at Real Zaragoza made a significant impression not only on digital channels, but also on the fans in the stands. After presenting the player in front of more than 7,000 at the club’s La Romareda stadium, Arranz said: "The player himself acknowledged the great excitement shown by his new fans in those moments. We are now interacting with specific groups through social media and little by little creating other offline activations.”

These activations are already creating results, Arranz confirmed, stating: "We are converting many Japanese followers into Zaragoza fans. We have already issued numerous season ticket and membership cards to residents in Japan."

This signals the start of an ambitious period of growth for the Aragón-based club. "It is important that this signing has generated positive effects in Japan organically and immediately,” Arranz said, “But now we must work to achieve tangible objectives in areas such as branding, merchandising and ticketing."

Okazaki 'outperforms' his teammates
"The signing of Shinji Okazaki has had a very positive impact both on the number of hits on our website, and on the number of interactions on our social networks," says Jara Echeverria, Director of Communications at SD Huesca.

If parallels are drawn between the social network impact of Okazaki's signing and that of Cristo Gonzalez’s, another important addition to the squad, one can conclude that the Japanese striker’s signing will bring more followers and generate more activity and comments on social media networks, based on what happened over the first few days of this time at the club. There were three times as many reactions on Facebook, four times as many views on Twitter and increased visibility on Instagram posts.

Shibasaki causes a flurry of activity on RC Deportivo’s social networks
RC Deportivo’s signing of Gaku Shibasaki from Getafe CF has also not gone unnoticed by Japanese fans, who have boosted Deportivo’s social network follower numbers. Shibasaki, who became the first Japanese player in history to represent the club, is an idol in his countryJapanese players have left an immediate mark on clubs’ social media channels, which is subsequently taken advantage of by the clubs to generate fan engagement strategies. More and more LaLiga clubs are looking for footballers from the Asian market that have positive impacts on both the financial and sporting spheres.