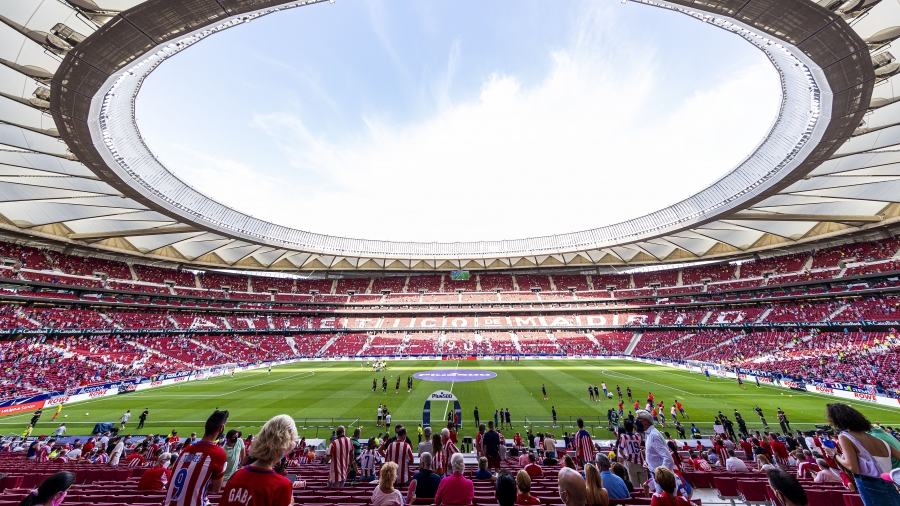 Earlier this June, Telefónica Tech held a webinar titled ‘Sports Tech, the digital revolution of football’, which was dedicated to technology’s role in the sports industry. Among the event’s attendees were Alberto Heras, marketing director at Getafe CF, Javier Jiménez, innovation director at SD Ponferradina, and Antonio Jiménez, IT manager at Real Betis.

The talk addressed topics such as the digitalisation of football stadiums and the possibilities that technologies such as big data, 5G or artificial intelligence can offer and how they could improve the capabilities and infrastructures of clubs and better the fan experience.

SD Ponferradina recently renovated their stadium, El Toralín, to provide a more global experience. Discussing these improvements, Javier Jiménez detailed: “We now have a much bigger and more functional store, as well as new dressing rooms, press areas and offices. We have created four VIP areas, we have equipped the stadium with other technological resources and we have incorporated new video scoreboards. Regarding the latter, we want fans to be able to take a selfie and appear on the video scoreboard on matchdays, as this offers greater interaction and, in turn, we can attract sponsors who are looking for these types of fans.”

Overall, SD Ponferradina wanted to “put the structure of the stadium in order by modernising its facilities” and the club now aims to focus on digitalisation and “to improve awareness of Ponferrada outside the region of El Bierzo, to attract new fans, to provide more value to the current ones and to try to find sponsors from further afield”.

As a result of the huge crowds experienced at football stadiums, the problem of connectivity in stadiums is “something common” to all clubs and an issue all the speakers agreed on. Real Betis have worked on a solution to this with the installation of 5G technology at their stadium, the Benito Villamarín. Antonio Jiménez explained: “We have set up the infrastructure in the dash system and we want to launch 5G connectivity the weekend of August 14th.”

The Real Betis IT manager also highlighted an upcoming innovation that will make football more inclusive, stating: “We are going to launch an audio description system for visually impaired people with our partner Cellnex. With an app and headphones, these fans will be able to listen to the match without any latency from any area of the stadium.”

The power of data

During the event, Alberto Heras explained how big data has allowed his club to better understand their fans and all those who attend the Coliseum Alfonso Pérez because, in the words of the Azulónes’ marketing director, “whoever has data has the power to make better decisions for the benefit of their club and fans”.

He continued: “We collect a lot of information about the supporters who visit and about our fans. For example, we see how the fans arrive at the stadium and which streets they use through heat maps.” In this way, it is possible to optimise events carried out with sponsors, who can even reduce the number of staff needed to reach the largest number of people they’re interested in, thereby saving costs and increasing the return.

Meanwhile, Javier Jiménez of SD Ponferradina confirmed a new feature, stating: “We’re going to launch a ticketing app so that our season ticket holders can have their passes on their mobile phones. With this, we’ll be able to have much clearer information and we’ll be able to manage both security and revenue issues, because sponsors want to know the number of supporters we have, their age and characteristics. It is a way of monetising the data.”

On this, the Real Betis IT manager commented: “We have always been more focused on service than on data analysis, but now that we have a sufficiently stable service level, it is time for us to make the leap into data.”

Speaking about the clubs’ own apps, Antonio Jiménez explained: “The Real Betis app allows for the possibility of loaning a season ticket; we don't do it by mail, passbook or paper copies, but from app to app. We do it through the app because it allows you to establish security mechanisms that other tools don’t allow. For example, we only show the ticket two hours before the match and we don’t allow screenshots; on Android the screen goes black when you make a screenshot and on iPhone we launch a warning that the season ticket has been suspended.”

On the security measures present in the Real Betis app, he added: “The app has an antivirus installed that protects the app, although it doesn’t protect the mobile. This helps because when you enter the app, the mechanism itself looks at what is there and if there is something suspicious on the device then it alerts the user by saying that there is something strange. If it is very serious, it tells you ‘don’t enter here’. It’s very interesting because it offers the possibility of checking the mobile phone if anything strange is detected.”

Internationalisation as a driver of growth

LaLiga clubs are taking increasingly important steps in the area of internationalisation, to boost their global growth. In this sense, Real Betis state that they are happy to work “hand in hand with LaLiga, because LaLiga is very well positioned and has also reduced the gap that there was to the Premier League”. The Verdiblancos, as Antonio Jiménez points out, “have 25 schools around the world and this helps to continue building the club’s brand”.

When it comes to social media, they are focusing on “the English-speaking and Mexican public” by creating specific content for these territories. Antonio Jiménez added: “This helps bring in sponsors and, for example, MuchBetter and Legacy came this way.”

Like the Andalusian club, Getafe CF are also happy to move forward hand in hand with LaLiga in their internationalisation efforts. As part of this journey, the club detected a particularly attractive market: “Although we do not have any Vietnamese players in the squad, through LaLiga we have detected that Vietnam is the country where we surprisingly have the greatest international presence, and this is because Vietnamese people identify with the values of Getafe CF.”

Alberto Heras continued: “We are also present in China through the Weibo social network, which we use through LaLiga. On the other hand, instead of opening academies abroad, what we do is maintain our product quality by bringing foreign players to Getafe. We offer technical training experiences and allow these players to live the experience as if they were professional players for one or two weeks. We have received more than 550 visits from countries far and wide, from Jordan to Thailand to Israel.”

SD Ponferradina, meanwhile, are focusing their internationalisation strategy on Egypt. The club’s innovation director explained: “Through LaLiga, I was invited to an event organised by an association of investors and marketing directors in the Middle East and we made a joint presentation, between LaLiga and us, to explain what LaLiga is and what a football club represents. Thanks to that event, we managed to convince a team from Egypt to come to Ponferrada to play in an U15 tournament, one that we’re going to hold for several teams to celebrate our centenary. We’re now talking with another team to carry out tryouts here, while we’re going to bring coaches from the club to explain our methodology and I even had an interview with an important online media outlet there. According to LaLiga, this interview received significant coverage.”