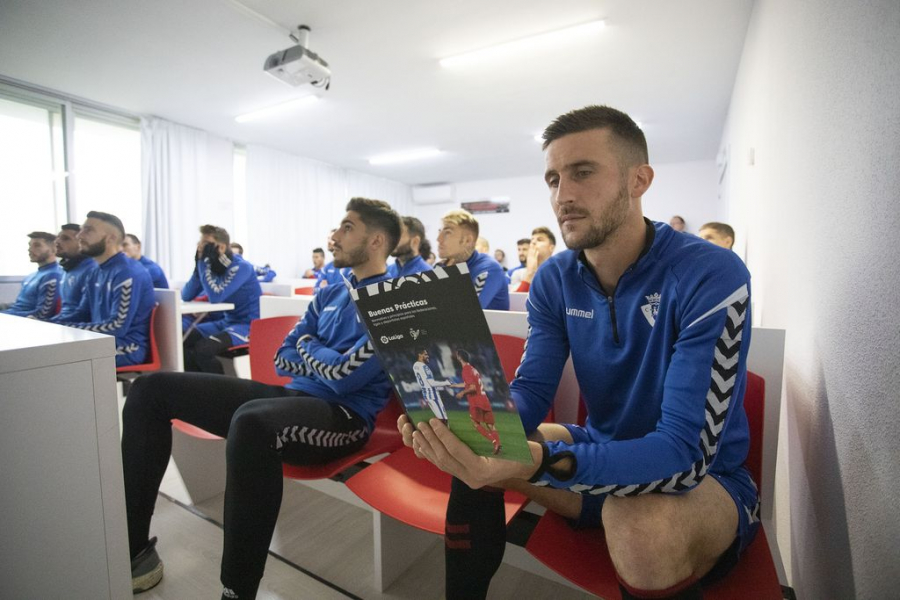 How LaLiga keeps the match-fixers out of football

The authenticity of football is key to the sport’s global popularity. To uphold this status, it is important to invest in security and integrity practices, eliminating the risks of match-fixing or corruption. One of the most comprehensive approaches in the industry has been designed by LaLiga.

The competition’s internal department of integrity and security, a team of law enforcement and technology experts, has committed significant resources to ensure that matches are free from corruption. Through its unique three-pronged approach – prevention, monitoring and reporting – the department brings together clubs, analysts and police forces to tackle the problem from every possible angle.

“The number of cases of match-fixing in professional football has significantly fallen,” Pedro Varas, the head of LaLiga’s department of integrity and security, explained. “Nowadays, all matches in LaLiga Santander and LaLiga SmartBank are monitored, as well as most of those in the third and fourth tiers. This makes it very unlikely for a possible case of match-fixing to not be detected.”

Prevention: 183 player workshops
LaLiga’s prevention stage consists of educational workshops that are carried out with the protagonists themselves, the players. “The players are aware of the risks that come with being involved in match-fixing and of LaLiga’s efforts to try to prevent it,” Varas said.

In the 2018/19 season, LaLiga organised 183 workshops for 5,300 participants from teams in LaLiga as well as the third and four tiers of men’s football, as well as several women’s football teams, youth football teams and futsal teams. All participants are provided an overview of LaLiga’s anti-corruption work, provided with limitations around placing bets on matches and given advice on their role in preventing match-fixing. This is followed up with posters and guidebooks that are distributed across the club.

“The players attend integrity workshops at least once per season,” Varas added. “We ensure they understand the risks and legal consequences of fixing a match in Spain, as well as the detection and investigation mechanisms we use at LaLiga to prevent this from happening.”

During the sessions, it is also made clear that sports betting, the sharing of inside information and the acceptance of external win bonuses are also prohibited and carry severe penalties. Match-fixing can bring jail terms of up to four years in Spain, as well as sporting bans.

“The players are increasingly aware of the need to avoid behaviour that can jeopardise not only their sporting careers, but their personal lives too,” Varas noted. “Every year we receive positive feedback from the sessions and higher levels of participation.”

LaLiga monitor 40 different betting markets using the 'Tyche 3.0' system to look for suspicious activity related to possible match-fixing before and during games pic.twitter.com/6HBLM4IBQ0

Monitoring: The industry’s leading technology
On the technical side, LaLiga monitors the live action to help analysts detect any suspicious activity. The Tyche 3.0 software, developed in-house by the league, analyses more than 800,000 records per day from the world’s 40 leading betting companies. According to Jose Ignacio Arbea, integrity and security director at LaLiga, this makes the software “the world’s most advanced tool in its field.”

“The Tyche tool contains live betting data from all professional and non-professional Spanish football matches and compares them in real time with the actions,” Arbea continued. “It then generates alerts that are subsequently analysed by specialist LaLiga personnel.”

Monitoring is achieved with a machine learning algorithm based on neural networks that forecast betting odds according to the stage of the game and events. The alerts generated by Tyche are investigated by analysts to determine if there was a sporting or logical explanation for the movement. If there is not, a complaint may be lodged to the Spanish police.

"Tyche 3.0 has placed us at the forefront of the battle against match-fixing on the global stage,” Arbea said. “We're the only league to have developed this software in-house, with the rest of the competitions typically subcontracting this service to external providers. This gives us far greater potential, not only in terms of our activities on a national scale but it also allows us to help other leagues and sports that are now beginning to develop integrity programmes."

To improve accuracy still further, an even wider range of data points will soon be introduced to Tyche 3.0. “We plan to incorporate real-time information from across social networks, as well as more technical information from the matches,” Arbea noted.

Reporting: Successful police operations
In the rare cases where suspicious activity has been detected, LaLiga is in a strong position to take decisive action. Thanks to its close working relationship with the Spanish national police, analyst reports from Tyche 3.0 can be used as evidence of a crime and processed accordingly, with the assistance of the general directorate for the regulation of gambling (DGOJ). As recent activities have demonstrated, it is a system that gets results.

“During the last three seasons we have filed more than 15 complaints in non-professional football, which led to the ‘Pizarro’ and ‘Cortés’ operations that were carried out by the national police with more than 50 arrests,” Arbea said. “We also instigated the ‘Oikos’ operation which has led to several detainees. All this has meant a big reduction in irregularities over the past two seasons and the further elimination of sports corruption.

“It’s very difficult to reach zero risk, but the system we have puts us in the best position to remove corruption from the game entirely,” Varas concluded. “All organisations must be involved in eradicating these risks. It’s not something that can be solved with a one-off intervention and requires continuous, permanent activity.”