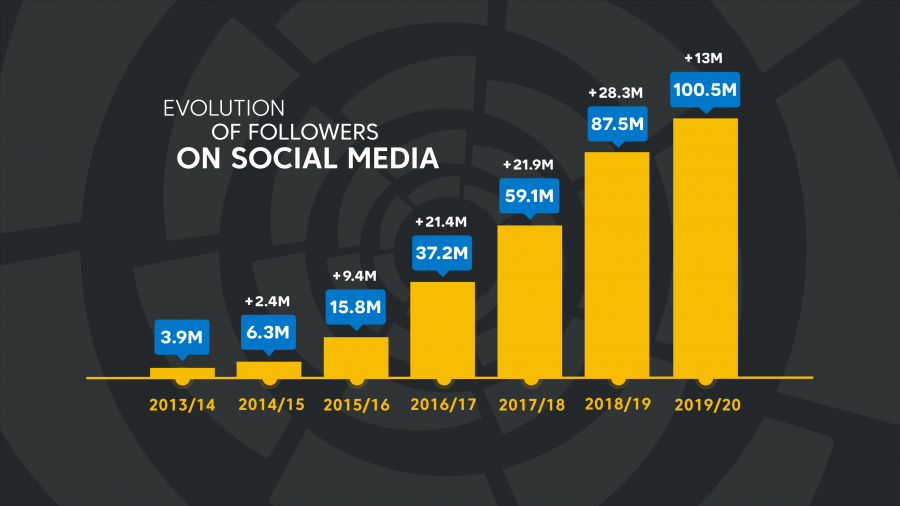 This month, LaLiga reached 100 million followers across its social media platforms, a number that competes with some of the world’s largest entertainment brands and reflects the competition’s global appeal. The milestone has been achieved by the league’s digital team but is the result of a much wider strategy to build an engaged fanbase all around the world.

For more than six years, the league has pursued social media growth as part of its wider internationalisation strategy. Rather than simply broadcast on as many platforms as possible, LaLiga’s approach is ‘glocal’, meaning that every new country or profile is curated carefully according to local trends and built gradually by regional experts.

The result is a global community of fans across 12 different social media platforms in over 15 languages, from Arabic to Hindi to Hebrew. Platforms include Weibo in China, VK in Russia and Line in South East Asia. Since the 2013/14 season, follower numbers have jumped 25x from 3.9 million, creating significant global visibility for both the league and Spanish clubs.

As Alfredo Bermejo, digital strategy director at LaLiga, explained: “This milestone is not just about social followers but building a global fanbase. In every region, we are working closely with these audiences to identify their needs which allows us to improve our product and create commercial opportunities.”

Growing a global audience
As part of the ‘glocal’ approach, LaLiga tailors its content to each of its audiences to create greater impact. To refine this approach, expertise is accumulated both from LaLiga’s diverse digital team of 25 professionals and from the LaLiga Global Network, a programme that has placed expert delegates in 46 countries to increase the competition’s presence.

This has led to a broad diversity in LaLiga’s output. Across its 12 platforms, there are 22 individual LaLiga profiles focused on specific areas of the business, such as esports, the LaLiga Foundation or the LaLigaSports initiative. The type of content also varies heavily by platform. There are short-form videos on TikTok, engaging visuals on Instagram and news pieces on Toutiao.

All of this has helped LaLiga to achieve a huge range of milestones. It has overtaken both the Premier League and NBA in number of Facebook followers. It is the first football league to strike an agreement with Facebook to live broadcast all matches on the Indian subcontinent in August of 2018. Its August 2019 #HolaLaLigaSantander campaign with TikTok reached 50 million global users. It is also the first football league in the world to reach 5 million subscribers on YouTube, a platform where it provides match highlights from LaLiga Santander in English and Spanish, while also offering live matches from LaLiga SmartBank in over 145 global territories.

“Football is a global game but fans still need to be able to relate to it on a local level,” said Bermejo. “Across the business we have put down roots in global markets in order to build true local knowledge and relationships. Our success on social networks comes from this glocal strategy.”

A physical presence
As well as building online followers, LaLiga organises physical activities in international markets throughout the year, supported by LaLiga’s nine international offices and the LaLiga Global Network.

With evets ranging from viewing parties, press summits, local sponsor agreements, football schools and even friendly matches featuring LaLiga clubs, this helps LaLiga go beyond social media and bring its global followers closer to the competition. “Part of being glocal is being physically present, as it shows audiences that you are taking their needs seriously,” said Bermejo. “It also creates more local partnership opportunities, which can be shared with clubs that are looking to increase their presence in a particular region.”

By continuing to weave its social media strategy into wider business activities, Bermejo is confident that new milestones are just around the corner. “Social media has become an overnight sensation in the sports industry and there will be some very exciting developments in years to come,” he concluded. “By staying close to our fans around the world, we’re ready for the changes ahead.”