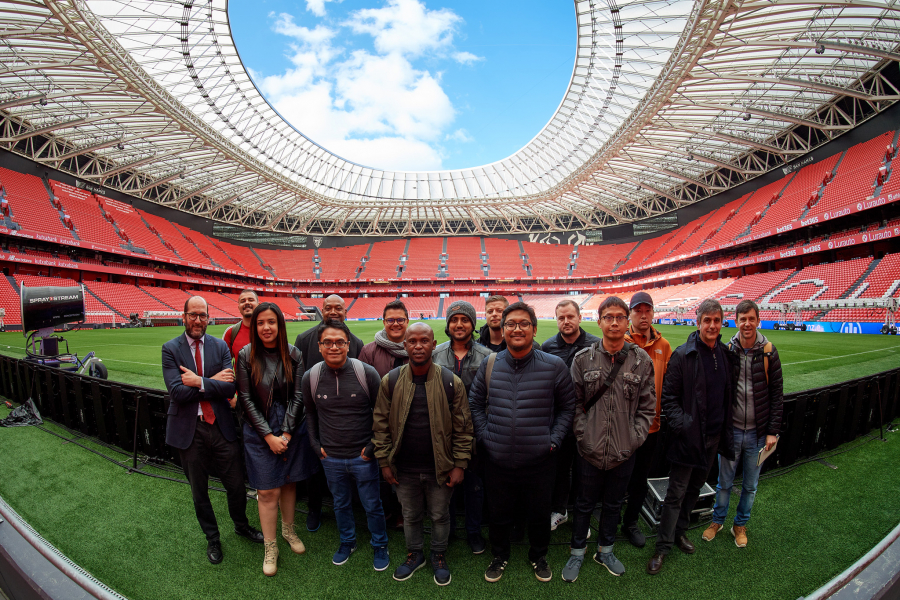 How international journalists are getting closer to LaLiga clubs

Spanish football is extending its international reach, reaching a point where LaLiga Santander is carried by 93 TV operators in 182 countries around the world, helping clubs of LaLiga to become recognised in bars and living rooms across the planet.

Alongside this, international media outlets are dedicating more and more column inches and TV airtime to telling the stories of the clubs, thanks to a global initiative from LaLiga’s communications department.

“From the global communications department, our objective is to spread the image of the clubs abroad,” explained Silvia Cosia, head of international communication at LaLiga. “We believe that the activities and events we organise with international media outlets bring value to the clubs and, therefore, to LaLiga. They help us grow abroad.”

Real Betis’ international vision
Real Betis is one of many clubs to recognise the value of international media coverage and with this in mind, the Andalusian club has begun organising events in collaboration with LaLiga’s communications department.

Before its home clash with FC Barcelona, the club invited media from the UK, Mexico, USA, Brazil, China, France and Portugal to the club’s Estadio Benito Villamarín for a behind-the-scenes look at how its brand is growing.

“The performance of the club is very positive and we believe that this type of event helps to transmit these messages to media that have a lot of international impact,” explains Ramón Alarcón, the club's general business birector. "We believe that this helps journalists to have a greater understanding of the global growth of LaLiga and its teams."

These journalists and correspondents were able to explore the stadium and meet with various club directors. Among these, Alarcón, explained the club’s international strategy to the visitors, as well as sharing some of the stories behind the global vision that has been adopted by the club in recent years.

“There are many areas to highlight, from the economic growth that we are seeing, the growth in our attendance meaning we have the fourth-highest following in LaLiga, our growth in social media where we also have the fourth-largest presence in LaLiga, or the various international growth events that we have carried out like the tour of Mexico and USA, the presentation of Inui in Japan, or the joint event with the Washington Wizards of the NBA, DC United of the MLS and LaLiga,” Alarcón added.

Explaining Granada CF’s model of success
Having won promotion back to LaLiga Santander last summer, Granada CF has enjoyed an excellent 2019/20 season in the competition. This success is built on the club’s strong business model, which LaLiga has helped to turn into a storyline for the press.

Through a recent event organised by the LaLiga communications department, club director general Antonio Fernández Monterrubio shared the secrets of its recent success, including its sustainability plans and how the brand identity of the club is linked to the city of Granada, with a wide range of reporters.

By gathering a broad range of media at once, these events are helping to distribute a single global message from the clubs in an efficient manner, creating in-depth stories that can accompany traditional sports coverage.

Sevilla FC and Cádiz CF’s impact in India
As well as business strategy, the off-the-field projects carried out by clubs are of interest to the international press. There are many initiatives around the world led by Spanish clubs and one example is the work being done by Sevilla FC in Pune, India, as part of the LaLiga Football Schools programme.

In order to explain the club’s efforts and aims in greater detail, Ramón Loarte, the club’s commercial and marketing director, is in regular contact with local media. With LaLiga’s support, Loarte recently spoke with Sakal Times, the leading English-language newspaper in Pune, to provide the latest on this growing project.

LaLiga SmartBank side Cádiz CF is also carrying out new projects in India which are raising local interest. Corporate and business director Enrique Pérez recently discussed the club’s ongoing scouting projects to The New Indian Express and to Sangbad Pratidin, while also outlining the club’s growth plans for the country.

By inviting international media targets to Spain, the team organises immersive trips in the days building up to the match, visiting nearby teams who highlight their sound business models, economic growth or ongoing projects, as well as showing reporters the world-class installations that these clubs use.

In addition to the teams involved in the match itself, clubs including Deportivo Alavés, SD Eibar, UD Leganés, UD Levante, Valencia CF and Villarreal CF have been visited.

“On these trips we have around 15 journalists from the media outlets in countries that are strategic for LaLiga and for the clubs,” Cosia explained. “We make the most of these trips by visiting all the clubs we can. This season, for example, we have been with 16 different clubs who have been able to showcase their history, their projects and their growth.”