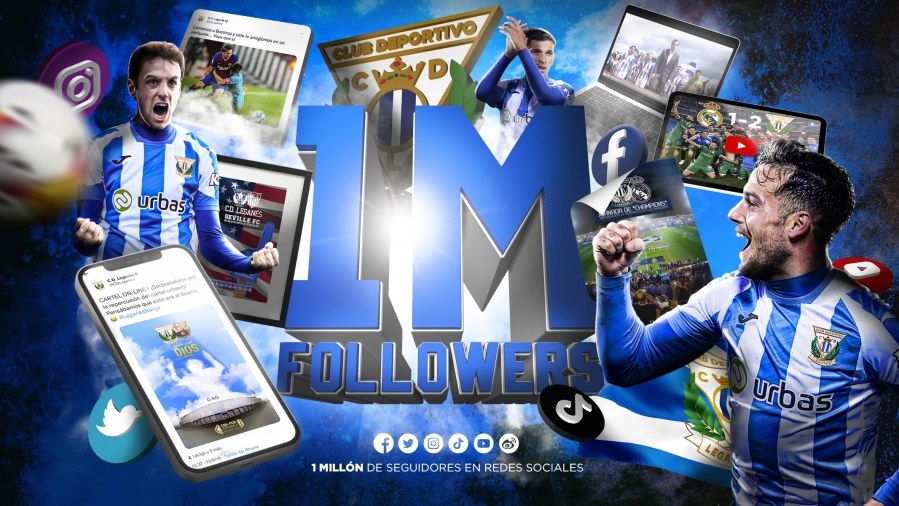 Leganés, a city in the south of the Madrid metropolitan area, may only have a population of 188,000, but the local football team now has more than one million social media followers from around the world, hitting that milestone in April 2022. For more than a decade, CD Leganés’ communications and marketing department has adopted a unique and creative approach to promoting the club, and this is paying off.

Across Twitter, Facebook, Instagram, TikTok, YouTube and Sina Weibo, the LaLiga SmartBank club has built up a global audience more than five times the size of the city. Instagram is the leading platform for the club at this moment in time, followed by Twitter, while the club’s TikTok is quickly becoming more popular too, growing by 101.21 percent in the first quarter of 2022.

Discussing CD Leganés’ social media success, Daniel Abanda, the club’s director of communications, said: “It has been possible thanks to many years of hard work, while we’ve tried to stay true to a fun, friendly and good-natured way of communicating. The key points have been consistency, a sense of humour, adapting to modern times, improving content design and taking advantage of the growth of social networks such as TikTok. We’ve also tried to stay active on each and every day of the week, rather than just on matchdays.”

While those working at the Estadio Municipal Butarque know that the time spent in LaLiga Santander between 2016 and 2020 was very helpful in promoting the club, there is much more to this success than that. It was back in 2009, with the club in the third tier of Spanish football, that the decision was taken to try a new and more creative approach to communications and marketing, one centred on positivity.

As Abanda explained: “Using humour has been our main tool to reach our audience. It hasn’t always been easy, as the line between what is funny and what is disrespectful is very thin, especially nowadays. But, we have tried to do our best by highlighting the positive aspects of this sport and avoiding the use of warlike or confrontational terms.”

The club’s matchday posters are an example of using humour to reach new audiences. CD Leganés work with a local marketing agency to produce a pair of promotional posters ahead of every home match, one to be put up around the local area and one made for sharing on social media. From jokes about Lionel Messi being god-like to capitalising on the hype the River Plate vs Boca Juniors Copa Libertadores final in Madrid generated, CD Leganés have often gone viral by turning current trends into fun material.

The LaLiga SmartBank club has also been willing to try new approaches and to use social media in unique ways. For example, they became the first LaLiga club to present a football shirt in 3D through volumetric video, they shared workout videos from fitness coach Pol Llorente during the coronavirus lockdown and they once organised an expedition for player Rodri Tarín to visit Leganés’ namesake town in the Philippines. Abanda and his colleagues have also managed to turn the club’s mascot Super Pepino, a superhero cucumber, into a cultural phenomenon.

CD Leganés’ reach truly is global. After Spain, the countries where they have the most followers are Morocco, Mexico and Egypt, while they are also growing elsewhere, such as in Japan, the home country of Lega player Gaku Shibasaki. Abanda added: “We have a presence in China thanks to the support of LaLiga in using the Weibo social network, where we have more than 167,000 followers, while we’re also, of course, present in Japan. When we’ve had players from these countries, we have taken advantage of the opportunity to create more personalised content, contacting local agencies and thus opening up the market for potential collaborations and sponsorship agreements. Japan is the country where we have the truest possibilities right now.”

Ultimately, the value of having more than one million social media followers is that this helps CD Leganés to grow in a business sense. Despite the pandemic and the club’s relegation to the second tier in 2020, they managed to renew with more than 90 percent of the brands that were sponsoring them.

As Abanda concluded: “This milestone strengthens us to keep offering better experiences for our fans and to provide greater visibility to our players and our sponsors, who view us as a leader and a positive brand to be associated with. The challenge is to keep this level up, which is really difficult, since it requires a mighty creative effort.”