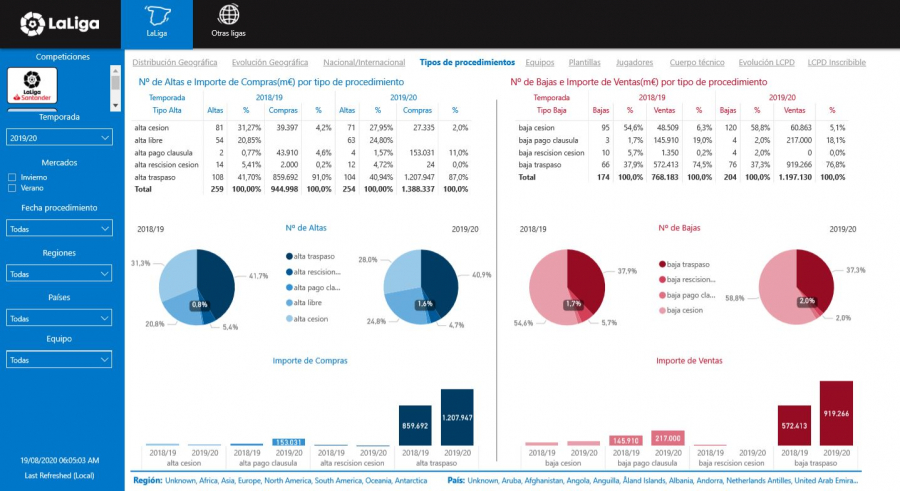 The transfer market represents a critical time for football clubs in all competitions, who face expectations to build a squad that can compete on the pitch while making deals that are financially prudent for their future. To help LaLiga clubs negotiate this process, the league has created a new platform that places a wealth of transfer data from across Europe’s biggest markets into the hands of all 42 clubs.

The transfer market dashboard is a unique offering among major European football leagues and continues LaLiga’s strategy to put trusted data at the heart of decision-making. Through accessing the tool, clubs can view which clubs are buying, which are selling and a full range of current squad data, as well as viewing aggregate figures of what clubs in England, France, Germany or Italy are spending.

With information back-dated to the 2016/17 season and including the current transfer window, the tool is designed to help clubs spot historical trends and also exploit new opportunities, while staying up-to-date with the activities of European rivals.

“A good transfer strategy often depends on quick decision-making but it is important that these decisions are well-informed,” commented Diego Martínez, LaLiga financial analyst. “We have accessed the most comprehensive set of data in the industry to help LaLiga clubs stay ahead.”

Reviewing global trends
For the past four years, LaLiga’s Economic Control department has closely analysed the transfer market at the conclusion of each window, which has helped confirm the squad cost limits by which all Spanish professional clubs now abide.

In coordination with the league’s Business Intelligence and Analytics department, this data has now been added to the new dashboard, the latest in a series of similar platforms, so that clubs of LaLiga Santander and LaLiga SmartBank can directly interact with the information at any point of the year.

“Our data analysis work goes back five years and we have seen clubs build a real proficiency in how they can use this to their advantage,” Martínez said. “This dashboard is the next logical step in that journey, particularly as we head into such an important transfer market for the football industry.”

A key feature of the dashboard is a database of all first-team transfers from 2016 to date and where they came from. Clubs can view which teams from which country have bought players from LaLiga and which have been sold to, focusing on the league as a whole or on individual clubs. As Mártinez explained, this quickly identifies patterns that clubs can use to their advantage.

“Over the years you can see clear examples of countries or clubs that are buying more players from Spain, or which clubs are selling their players to Spanish teams,” he said. “These can be reliable indicators of where a club may have success as they look to make the most profitable acquisitions and sales.”

National and internal analysis
Clubs can then make detailed analysis of how they compare to other teams in the competition, reviewing total purchases, sales and the total costs associated. Beyond this, clubs can see aggregated data for each squad, including the age and nationality of the players, length of contracts and the status of key coaching staff.

Comparing this data with the squad cost limits, which are made public every year, clubs can then get a clear picture of how local rivals are spending year-on-year and which may present good targets for future business.

While sensitive financial data is not made available, viewing this aggregated information offers clubs new insight into how their transfer activity compares to others, providing evidence of good practise or identifying opportunities to improve.

“It is in our interests that all clubs have access to the same strong data,” continued Martínez. “The information already exists across many sources, but by putting it in one place we are providing an equal opportunity for every club to use it. Enabling this kind of informed decision-making ultimately helps the league to grow.”

Comparing European rivals
To further assist with this, LaLiga has added a section to the dashboard that shows the transfer activity of the five major European leagues. Through this, clubs can review their progress against teams from the top two divisions in England, France, Germany or Italy as well as Spain.

Reviewing individual summer or winter transfer windows from the past five seasons, the tool displays the total transfer spend and transfer income on an individual club or league basis.

A third column shows the net difference between incoming and outgoing costs, revealing the levels of profit or debt that are being accumulated over time. In recent analysis, Spanish sides were shown to be performing well in this category, showing the greatest balance between spending income of the top five leagues.

“Staying aware of overall spend helps clubs to avoid the accumulation of debt, which is a critical part of our economic controls process,” added Martínez. “This feature is designed to help strengthen LaLiga’s position as a financially responsible organisation, with all clubs aware of their progress and able to show the leading status they have in Europe.”

Maintaining leadership through data
LaLiga President Javier Tebas recently stated that continued growth of football competitions would be best achieved through technology. By making the practice of data analysis commonplace across its clubs, LaLiga aims to lay foundations for the next generation of growth in the industry.

“Together with clubs we are working to share insights and tools that will take us forward,” Martínez concluded. “Nobody will be left behind.”