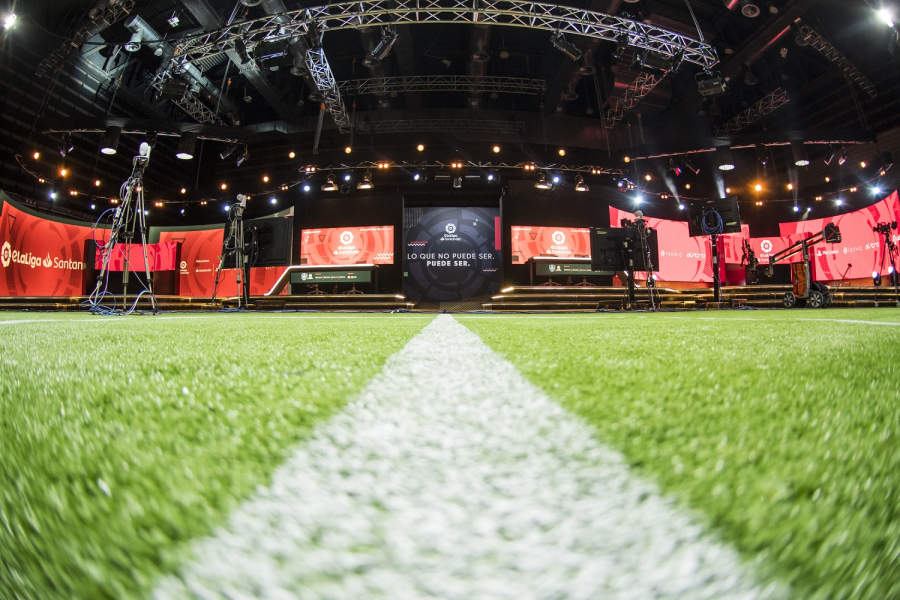 The fourth edition of eLaLiga Santander launches with 38 clubs

LaLiga’s growth in the competitive gaming space was demonstrated this month with the launch of the eLaLiga Santander 2020/21 season, which now features 38 of the 42 clubs making up LaLiga Santander and LaLiga SmartBank.

During a part-virtual, part-physical launch event in Madrid, 64 gamers who are set to represent the clubs were unveiled. While some were aware of which club they would be representing in advance, others discovered which club had hand-picked them to take part in Spain’s official EA SPORTS™ FIFA 21 Global Series competition during the presentation itself.

A new feature of this eLaLiga Santander season is that 11 of the clubs were able to select their main player - or to add a player to their squad - from among those who were highest ranked in the online tournaments held between October and November. This ‘draft’ style process gave an added profile for the new faces that could soon become future eSports stars.

“eLaLiga Santander has helped us not only to reach a younger audience but also to introduce our traditional fans to the world of videogames; it’s a two-way process,” said LaLiga President Javier Tebas. “This way, video game fans can tap into the passion and emotion that traditional football offers when as part of our wider entertainment offering.”

“When we began the competition four seasons ago with just 10 clubs, we set ourselves the ambitious project of getting nearly all LaLiga clubs involved in this project,” added Alfredo Bermejo, digital strategy director at LaLiga. “Today that objective has become a reality and we are very grateful for the trust that clubs have shown in us during the exciting growth of the league.”

“We believe competitive gaming is a long-term growth accelerator and football leagues such as LaLiga embracing these events will strengthen fan engagement over the next decade,” he said.

“Millions are engaging with sport through EA SPORTS FIFA and the viewing audience for our EA SPORTS FIFA competitive events continues to climb. Thanks to this growth, we fully expect this to be our best eLaLiga Santander season.”

Felipe Martin, Head of Sponsorships, Events & Social Media at Santander España, continued: “This competition allows us to bring together two of Banco Santander’s greatest passions: football and technology. Where football is concerned, we have LaLiga Santander and LaLiga SmartBank. And with regards to technology, it fits perfectly with our Digilosophy, Santander’s digital philosophy in which technology is at the service of people to solve day-to-day issues how and where the user wants, companies and society in general. Moreover, eLaLiga Santander provides us with an opportunity to reach new generations and fans through emotion, connecting with them directly based on age and social-demographic profile.”

eLaLiga Santander regular season
The 2020/21 eLaLiga Santander season got underway in January 2021 and matches will take place on a regular scheduled basis over five exciting and emotionally charged months, lasting until May.

The eLaLiga Santander clubs have been divided into two groups, which will meet to compete twice a week over 10 weeks. Each matchday will consist of five rounds and in each of these rounds four games will be played simultaneously, making a total of 20 games per matchday.

The first matchdays will be played online, with all matches broadcast through eLaLiga Santander’s digital channels. In the latter stages the matches may potentially be face-to-face, depending on health restrictions.

In April, eLaLiga Santander will take a break from its regular season for the eLaLiga Santander Cup, in which the top eight teams in the competition at that point in the campaign will face each other over the weekend of April 3 and 4.

The regular season will end on April 21, when 16 teams will qualify for the Grand Final of eLaLiga Santander 2020/21. From these, a final winner will emerge during May.

The prize pool is one of the biggest competitive gaming prize pools in Spanish history and the largest of any Official League Qualifier in the EA SPORTS FIFA 21 Global Series, representing a huge incentive for players to compete.

Fans will be able to follow the daily goings-on of the competition through the eLaLiga channels on Twitter, Instagram, YouTube and Twitch, along with EA Sports’ Twitter and Instagram accounts, while the event itself can also be followed live on LaLigaSportsTV. In addition, all the information surrounding the competition can be followed through the hashtag #eLaLigaSantander.