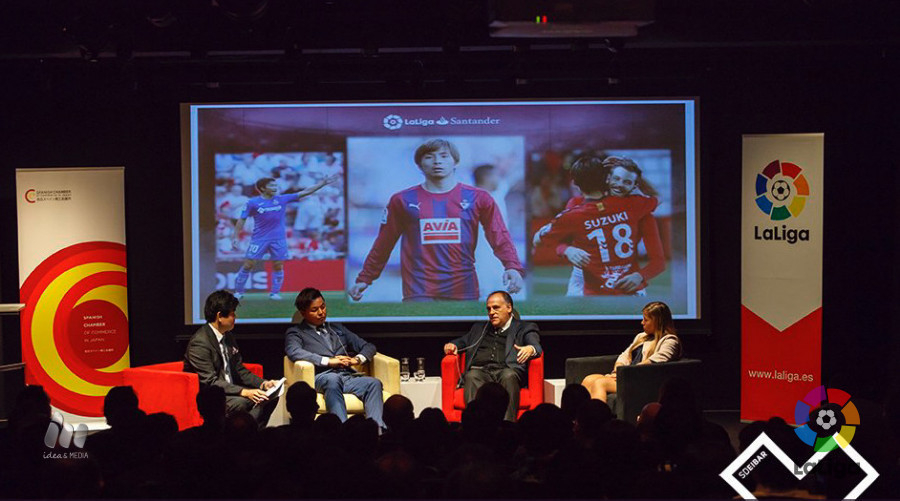 Thanks to Japan international Takashi Inui, Eibar have begun to make an impact in the Japanese market. The winger has been the best possible ambassador for Eibar’s growth in the Asian country, with the Basque club having designed an international brand and commercial relationships development strategy with the assistance of LaLiga’s international development team.

“The experience of our club and LaLiga’s joint visit to Japan was very satisfactory,” Eibar’s general director Patricia Rodríguez explained. “We achieved our stated objectives, through several meetings with various commercial agents, media and institutions. At the same time, we took part in a number of events based on the Japanese community.”

At the first of these events, LaLiga president Javier Tebas showed his support for Eibar’s international project by attending the function at the Tokyo Cervantes Institute alongside Shoji Jo, the former Real Valladolid player and the first Japanese footballer to play in LaLiga. During this talk, which around 200 VIPs and 20 journalists attended, the values of LaLiga were put on display, Eibar’s management model was explained and Shoji Jo spoke about his experience of being the first Japanese player in the Spanish top flight.

“Along with LaLiga, we secured new pathways into the country, as well as boosting our brand awareness through the various events we participated in during our stay in Japan,” Rodríguez added.

Eibar coordinated their agenda with Octavi Anoro, a member of LaLiga’s Global Network, and they took part in around 20 commercial and institutional meetings in just three days. There was also time to address the local media, including Wowow, Yokohama FM and Bunka Hoso. They were incredibly interested in Inui and in his adaptation to the Spanish league and to life in Eibar. “We understood during this trip to Japan that our club, its history and its model have caught Japanese people’s attention and earned their appreciation,” stated Rodríguez.

This was the third time Tebas has visited Japan in less than a year, following an invitation to participate in the 19th Nikkei Global Management Forum, which was organised by Nikkei Shimbun, Asia’s leading financial newspaper, and by The Financial Times. Yet this was Eibar’s first ever official visit and Rodríguez was very grateful for the league’s help. “These types of trips help to develop relationships with professionals in the country, as well as making them more confident about working together,” she said after one event organised between LaLiga and the J-League. “The assistance of LaLiga has helped us in terms of contacts and in terms of planning a schedule that allowed us to squeeze the most out of our stay in the country.”

For LaLiga, this was simply the continuation of the mission to internationally boost the recognition of all clubs. The data from the projects which have already been carried out is encouraging and there is reason to be optimistic about LaLiga’s growth. As an example, Sevilla played a match against Kashima Antlers in pre-season, one which was only shown online but which attracted an audience of 2.1 million unique users. Furthermore, there has been a 70 percent increase in the number of Japanese unique users visiting the websites of the clubs involved in the ‘Clubs Project’, while there has been an increase of 59 percent for LaLiga’s official website and an increase of 15 percent in terms of YouTube subscribers from the country. Also eye-catching was the fact that Japan was fourth in the world in terms of participation in the worldwide promotion for the first Clasico of the 2017/18 LaLiga season.

It’s clear that interest in Spanish football is increasing in Japan, with the country’s media outlets covering more and more clubs.