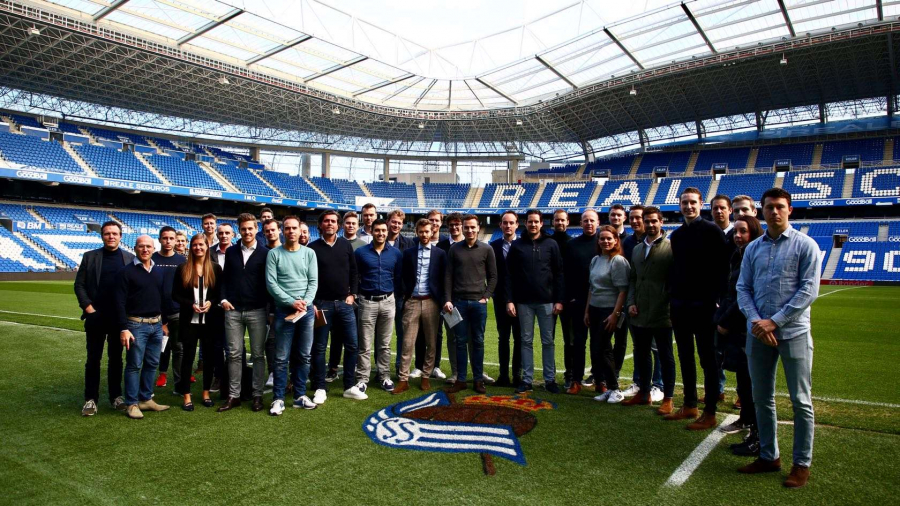 Dutch clubs visit Spain to study the growth of LaLiga

LaLiga has become a reference for other sporting competitions that want to study how the league and its clubs go about their business. Given its desire to support the global growth of football, LaLiga has an open policy towards sharing its methods with competitors. The latest example of this was a trip by clubs in the Netherlands’ first and second divisions and from the KNVB, the country’s football federation, to LaLiga Santander clubs SD Eibar, Athletic Club and Real Sociedad.

KNVB Expertise, a research centre and consultancy group in Dutch football, organises a trip every year for a selection of clubs for them to develop and become even more professional. This year’s trip brought them to Spain’s Basque country, which despite being one of the country’s smallest regions boasts four LaLiga Santander clubs.

“The general feeling was very positive,” Oriol explained. “The group visited three Spanish clubs that are all based in a relatively small area, clubs that all have their own identity but that also share pride in their Basque heritage. Members of the expedition were really interested to hear about the clubs’ strategies for engaging with local communities and for standing out as unique. That’s something many clubs aspire towards.”

SD Eibar’s international growth
The group of Dutch directors began the visit at SD Eibar, which is currently taking part in its sixth consecutive LaLiga Santander season despite being one of the smallest club’s in the competition’s history. The delegation spent time at the club’s Ipurua Stadium to learn how Eibar has been able to defy the odds and establish itself at the top of Spanish football.

Among the standout topics were the club’s international expansion and sustainable investment. “The clubs were most surprised by the evolution we’ve had since we reached the top division, with the investment we’ve made to ensure the stadium is adequate for modern times and modern needs,” said SD Eibar’s director of communications Unai Artetxe. “The story of our capital increase in 2014, which led us to the point where we now have more than 11,000 shareholders from 69 different countries, also surprised and impressed our guests.”

Following the conversation about the 80 years of history of the club, the group was shown around Ipurua’s facilities to understand how SD Eibar has maximised its limited space to create a modern and comfortable stadium that allows for fans and others to enjoy the ground, both on matchdays and on other occasions.
“These meetings are very constructive and also allow us to learn how other clubs from different countries approach this work,” Artetxe added.

The rebuilding of San Mamés
This trip then arrived in Bilbao, where the directors from the Netherlands heard about Athletic Club and its new stadium, San Mamés. Recently chosen as a host for Euro 2020 matches, the stadium was completed without the club needing to leave the site of its old ground. This achievement of transforming its surroundings without physically moving was a key focus of the visit.

“It was a very positive experience,” said Borja González, stadium operations manager at Athletic Club. “The group was particularly interested in the business side of the stadium and the fan experience that we can achieve here.”

Real Sociedad’s digital transformation
The tour concluded with Real Sociedad, a club that has embarked on a complete digital transformation in recent years. The guests from the Netherlands heard from Juan Iraola, the club’s director of digital operations, along with Begoña Larzabal, the commercial director and Andoni Iraola, director of the Real Sociedad Foundation. The digital innovation that the club has embraced, which includes a wide range of fan experiences, is already generating positive results in terms of greater connection and interaction with supporters.

Knowledge sharing for the growth of football
Continuing these projects is central to LaLiga’s ongoing internationalisation strategy. The visit of the Dutch clubs follows a wide range of similar trips carried out with leagues and federations from all over the world, through which the league establishes important new connections and identifies fresh opportunities to help develop football.

“Through these collaborations each club, no matter how small and no matter its level of resources, can find new ways to advance and to grow, benefiting both its own brand and the global football community,” Oriol concluded.