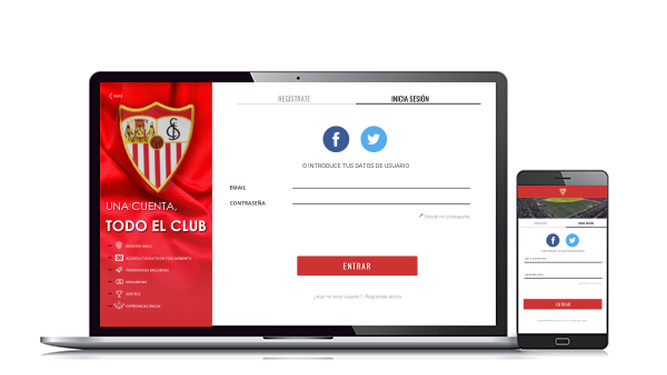 The digital transformation of Sevilla FC: A data revolution

Football clubs are working to build the strongest possible relationship with their fans, while at the same fan interactions are becoming more diverse. Whether making a purchase inside the stadium, commenting on a social media post or browsing a mobile application, today’s fan touch points span the physical and digital and come from all over the world.

A common denominator is technology, as the majority of these interactions now involve some kind of online interaction, meaning data is generated. Capturing and understanding this data has therefore become central to any attempt to improve fan relations and thereby increase revenues. At Sevilla FC, this has led to the creation of a whole new way of working.

With the aim of moving the digitalisation of the club forward and of becoming closer with the fans, the Andalusian club began a digital transformation in the past year with the launch of its Business Intelligence Center, a platform for storing data on its contact with fans, both in physical and in digital spaces.

This includes data on the purchases of food and drink at the Ramón Sánchez-Pizjuán stadium, on the sales of shirts in the club store, on the tickets sold on the website and on much more. Whatever the source, this information is now anonymised and used to build profiles of the club’s fans, allowing for a more personalised and mutually beneficial approach.

Bringing all data into one place
To begin, Sevilla FC carried out an analysis of all sources for existing and future data points, as well as of all contact points that needed to be integrated into its systems. This included interactions on its website, e-commerce transactions, Wi-Fi connections, promotions from its World Fans supporters club and the digital space for members and season ticket holders.

In the second phase, the club’s mobile app will be added, along with the stadium bars, brick-and-mortar shops and other points where information can be gathered.

Bringing such a variety of data points together is a technical and cultural challenge. Ramón Loarte, the club’s director of marketing, commercial and retail, is aware that this digital transformation requires a new way of thinking among the club’s employees. “It has been really difficult, but it has enriched the whole club, from ticketing to social media to IT to digital strategy to our data protection officer,” he said. “Everyone has completed the first phase satisfied, having seen how it has all evolved.”

International partnerships bringing threefold sales increase
When it comes to gathering data and putting its ideas in motion, Sevilla FC has searched out global business examples to follow, including in the USA. “The American sports industry is the most developed market,” Loarte said. “The NBA, MLS and NFL generate many ideas. To get our project up and running, we principally focussed on the NBA and have had meetings with their digital and business departments.”

The club is now working to form strategic partnerships to put the best technology infrastructure in place. “We believe that the future is about working with technological partners and we are looking for experts in this area, not necessarily from the sports industry,” Loarte said.

The changes that Sevilla FC has made are already translating into positive results and an increase in sales. “We spotted an example of success during our Black Friday sales campaign,” revealed Loarte. “Using anonymised data from our fans, we were able to increase our online sales threefold compared to the year before. Crucially, it was a more segmented campaign meaning fans were shown what they’re truly interested in. Of course, this data was given voluntarily by fans as we carefully abide by personal data protection laws.”

Thank you @eldesmarque_sfc and @SevillaFC_ENG for the stadium tour and visit. Best of luck for the season! https://t.co/qBeVRMW2QM

Capturing stadium data
As the club continues to refine its approach, the Ramón Sánchez-Pizjuán will play a crucial role. The 65-year old stadium has various functions for fans: a live match venue; a museum for those who visit for a guided tour; or an official club shop. In each of these cases, relevant data is generated.

There have been significant improvements and upgrades to help the club successfully capture this data. Importantly, it has analysed and improved its WiFi with various technological providers. “The WiFi is a key resource for us as we can analyse the behaviour of fans who connect and over time, improve the service we are offering them,” said Loarte.

One example of its improved service is the club’s audio tour guide, which is available to download in seven languages as a result of the club analysing the profile of its visitors. “This is one way in which we can segment users by language and make the most of the data,” Loarte noted.

Getting personal with LaLiga
As progress is made, more and more data is appearing that the club can use to refine its approach. In the near future, it plans to deepen its collaboration with LaLiga, which recently announced a series of club dashboards that provide segmented data on fans including their TV habits, social media interaction and ticket purchases.

“We’re going to create a new mobile app along with LaLiga and Yinzcam, a specialised software company, which will be personalised for each user,” Loarte said. “Users will be able to access all services and products from the club in one place, creating more fan-specific data that can improve both ours and LaLiga’s databases. It will enrich everyone’s experience.”

Projects like this will continue to build the profile of a club that has built a reputation for using data in its processes. Director of football Ramón Rodríguez ‘Monchi’ Verdejo is widely known for studying player data before making new signings, for example. As its digital transformation continues to grow, the club hopes to improve both its own operations and those of the entire industry.

“We’re excited to work on the next wave of this project,” Loarte concluded. “Sharing more relevant data creates benefits for all.”