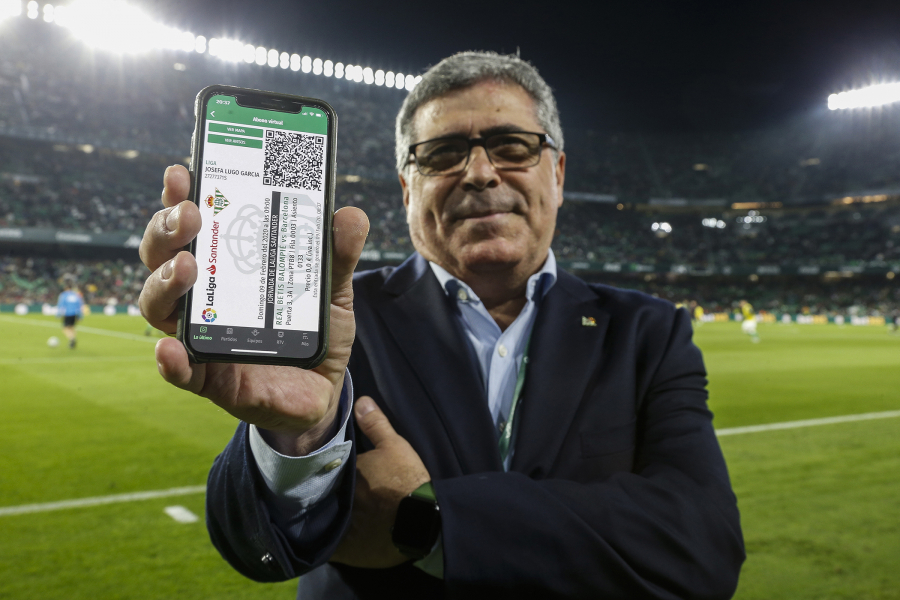 It’s not only on the pitch that Real Betis has been making progress in recent years. At the same time as the Seville-based club has achieved strong league positions and experienced European campaigns, the club’s IT department has been introducing technology that creates better experiences for its fanbase while also boosting revenues.

The approach taken by the team is radical and careful at the same time. On the one hand, the way the club is being run is being overhauled so that key processes can be done digitally. On the other, traditional means of communication are still maintained to ensure that no fan is left behind. By managing this delicate process and achieving positive results across multiple departments, Real Betis has become a pioneer in LaLiga that other clubs are following.

“We’ve made things easier for the fans and in doing so we have transformed the club,” said IT Manager Antonio Jiménez López. “We’ve left behind the old footballing model, where everything involved physically going to offices and waiting in queues, and we’ve moved to a 100 percent online model.”

Boosted attendance
One of the most visible examples of the benefits of the new digital developments is with stadium attendance. “We’re absolutely mad about empty seats, we don’t want empty seats in our stadium,” explained Jiménez López, who noted that the IT department has achieved a 50% rise in average stadium attendance since the 2016/17 season. Its current average attendance of 48,000 is the fourth-highest in Spain, the club claims.

This has been achieved by allowing season ticket holders who can’t make it to a specific match to share their ticket with a friend or family member through the club’s official app, change the status of the ticket (from child to adult, for example), or to make the ticket available for resale. In this case, the club splits profits 50/50 with the ticket holder, with funds received the following month in their bank account.

With 50,000 registered season ticket holders, along with a waiting list of 7,000, Betis is one of the most faithfully followed clubs in Spain and numbers are increasing. The club claims that the majority of these already use the club’s official app and that adding a digital ticket service has proved extremely successful.

“We’ve significantly increased stadium attendance, which boosts the club’s economic results and also the international image of Real Betis,” added club communications director Julio Jiménez Heras. “The way the stadium looks during home matches is attractive and it makes people watching on TV want to experience our matches in person.”

Other ticketing matters now managed through the app include purchasing away matches or renewing season tickets. This avoids the need for fans to physically queue outside the stadium, while providing equal opportunities for fans who do not live close by. The club is also thinking of fans who are not comfortable with digital technology, providing a traditional phone line for followers who request it.

Paperless ticket entry
To complement its digital ticketing initiatives, Real Betis has updated its in-stadium technology to make it possible for fans to enter the ground without a paper ticket. Thanks to new readers at the turnstile, fans can now simply scan a QR code, drastically reducing the crowds that could occur before matches.

Again, this process is carefully controlled through the club’s app. For security purposes, entry must be completed during a timed window, meaning that the same code cannot be used by more than one person. The application also automatically adjusts its brightness levels to ensure that the scanning process works, allowing for the queues to move quickly and smoothly.

“We know that lots of people travel to matches in groups including families and fan clubs, so we made it possible for them to have all of their QR codes together in the same application,” Jiménez López noted. “This is a big advance and a great help if somebody forgets their ticket on the day.”

Voting via app
Technology is also changing how the club is governed, playing a central role at shareholder meetings and voting on motions. With around 14,000 individual fans owning 60 percent of the club, these meetings are an important and busy occasion at Real Betis. But in the past, they would be very slow and complicated with all votes needing to be cast in person.

Now with disitalisation, the club has been able to drastically improve the voting process while ensuring that more fans can become involved. Votes are now cast in around 30 seconds using a remote control system and can be automatically tallied by the club, while fans who cannot attend now use the app to participate and ensure their voice is heard in the future running of the club.

Influence on other clubs
With all its digital initiatives, the club is willing to share its insights across the league. For example, those carrying out stadium renovations can review a new digital system that Jiménez López designed to improve seating allocation inside the stadium. While its ‘Gol Sur’ stand was being increased from a capacity of 5,000 to 14,000, Betis was able to move its fans to other parts of the stadium without separating families or groups of people who wanted to sit together. The same system then ensured that fans could return to the new stand without disruption.

In addition, Eibar is now working with the club’s IT department to discuss how its own shareholders’ meetings can be discussed digitally, as the Basque club has shareholders all around the world who want to participate.

As well as consulting with Eibar on moving the shareholders’ meetings online, Real Betis also works with LaLiga to evolve the web services of the competition. Recently, it has helped to synchronise AVET, the ticket management platform of the league, with websites of official LaLiga fan clubs, which was not previously possible.

The club has also shared advice on using digital technology to boost stadium attendance with the likes of Atlético de Madrid, Las Palmas and Girona, but this is just the beginning of what it hopes will be a much broader culture of sharing.

“Clubs should dedicate more resources to IT and fill such departments with qualified people,” Jiménez López concluded. “Just as a good pitch or sound finances are necessary, interaction and knowledge exchange between clubs should be promoted.”