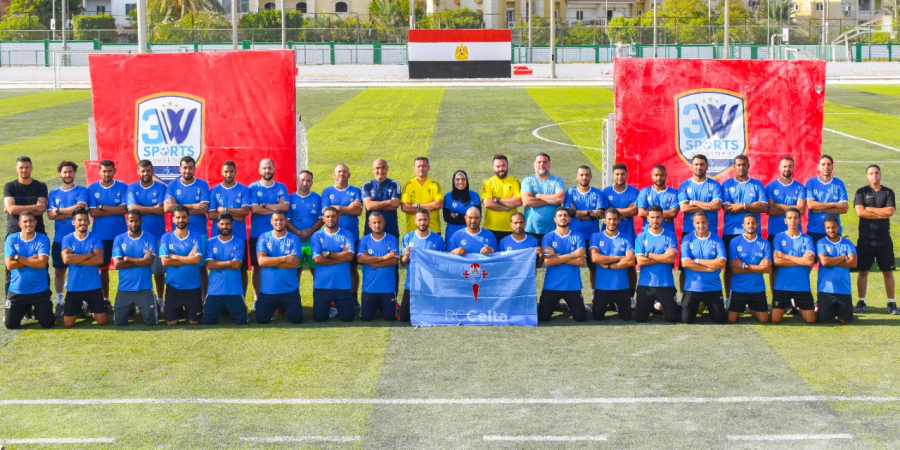 Over the course of Celta Vigo’s more than 90 years of history, the Spanish club has created a global presence. Over 5,000 kilometres away from Galicia, the North African country of Egypt has a special affection for the club following the signing of Ahmed Hossam, better known as Mido, in 2003.

The Egyptian forward’s time at Celta Vigo was brief but memorable. In a short space of time, he was able to show his quality and earn a place in the fans’ hearts. Arriving from Ajax in the winter of the 2002/03 season, Mido scored four goals across eight matches in LaLiga Santander. From just these few months, the club has maintained links in Egypt ever since.

Mido takes part in the show
Boasting one of the most successful academies in Spain, Celta Vigo is a reference for youth football across the industry, with a distinct methodology and philosophy that has seen it open multiple academies around the world.

For these reasons, coaches Marcos Alonso and Diego García were selected to travel to Egypt for a new event organised by the Celta Vigo Foundation.

Working in partnership with 3W Sports Investment, the coaches offered their expertise to ‘You are the star,’ a new Egyptian reality TV show that looks for the next generation of football starts. The coaches were involved in the selection process for this competition, with a group of winners receiving the opportunity to travel to Vigo to train in the club’s academy.

“We have a structure and an order when it comes to youth development,” Alonso explained. “There is a very specific methodology and defined strategy. We don’t make it up as we go.”

The process began in July and August with aspiring footballers from across Egypt signing up. A total of 80 have selected to take part in the show. The programme has just concluded filming and will be screened in December in Egypt.

The fact that Mido appeared for the Galician team was further reason for the producers of ‘You are the star’ to turn to Celta Vigo for help in the selection process. The forward will feature in the show and, on meeting the two youth coaches, was presented with a personalised shirt that recalls his time in LaLiga.

Possible opportunities in the Egyptian market
Visiting Egypt to take part in these auditions has created a new platform that the club is keen to explore. During the trip, both Alonso and García were able to organise a session on coaching theory and practice with 45 coaches from Egypt and other neighbouring countries. “We had very positive feedback from the coaches,” explained Marcos Alonso, who also fills the role of the club’s international academies coordinator.

Alonso and Diego García, who works as the coordinator of the club’s Wanda education project, also visited the Egyptian Football Federation during their stay and met with Al-Ahly, the most successful club in African football. These meetings served as an opportunity to exchange ideas, knowledge and experiences that can help the further development of the game in both continents.

“They were all really intrigued to learn how we have so many academy graduates in the Celta Vigo first team,” Alonso recalled. “This opens the door for future collaborations.”