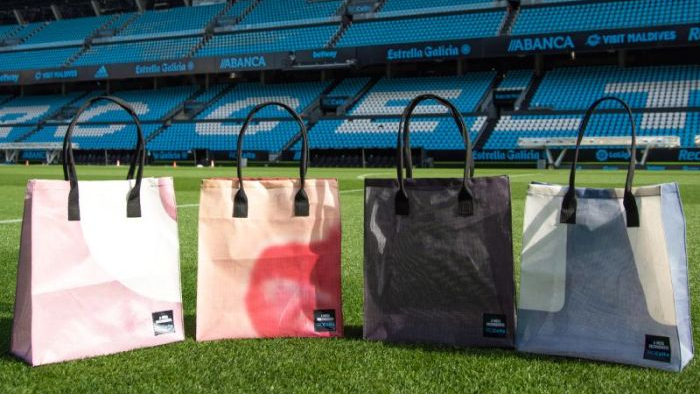 Two years ago, in 2019, RC Celta de Vigo was going through a difficult time on the pitch, fighting to avoid relegation from LaLiga Santander. Ahead of a crucial home match against Villarreal CF, thousands of supporters united in support of the team through a huge citywide campaign called ‘A Nosa Reconquista,’ which celebrated the historic battle that saw Napoleon’s French army expelled from Vigo.

To inspire the players, over 1,000 square metres of canvas was hung across Vigo and in the Abanca Balaídos stadium bearing the ‘A Nosa Reconquista’ message. It has since become associated with a famous victory for the club, which overturned a 2-0 deficit to win the match 3-2 and eventually earn their survival in the first division.

Two years on from that campaign, the Galician club is evoking the spirit of that campaign by recycling the canvas to form recycled bags that are now on sale to its fans.

A special and sustainable souvenir

Discussing this idea, the Celta Vigo marketing director Maruxa Magdalena said: “To coincide with the anniversary of that campaign, we wanted to do something special to commemorate that turning point. We found that the canvasses from that time could be used to create a series of bags, which represent a special souvenir for fans.”

The initiative combines a positive marketing idea with a wider commitment to boost sustainability at the club. The club aims to demonstrate that it is possible to materials a second life, particularly promotional banners that are often created for one-time use.

“It’s an alternative way to promote sustainable consumption and we’re doing this in collaboration with SINdesperdicio, a company in the circular economy that specialises in reusing materials,” Magdalena continued.

There has already been a very positive response from the fanbase, as Magdalena revealed. “The supporters value the sentimental significance of these bags and also the environmental aspects,” she said. “Many fans have applauded this idea of giving a second life to the banners that now form part of the club’s history. It played a big role in our survival that year.”

This response has encouraged the club to further develop its environmental projects, which in recent months have included the construction of the Afouteza sports city, which was designed with both sustainable produce and coexistence with nature as core priorities.

The club and its charitable foundation have also overseen the installation of an environmental management system based on the ISO 14000 international benchmark, which helped the club obtain an environmental certification from an accredited institution in 2020 and which helps the club to identify its most significant environmental impacts.

To further increase its impact on society, various programmes have been carried out by the club through its foundation such as the collection of waste at the Abanca Balaídos and other club facilities. The club has carried out numerous marketing campaigns to promote recycling, while it has also organised training sessions for employees and for partners with environmental organisation ECOEMBES. From this, new informative guides around climate change have been put together for raising awareness among employees.

“Football is generally becoming more and more socially conscious and committed to such causes, which is something we should all back,” Magdalena concluded. “We are satisfied with this initiative and the fact we’ve been able to contribute our grain of sand in the effort to look after the environment.”