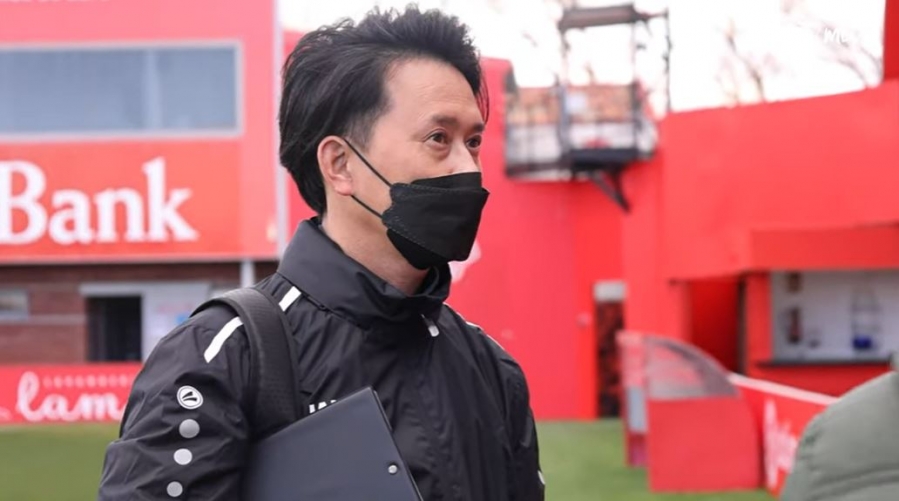 As part of CD Mirandés’ internationalisation process, the LaLiga SmartBank club recently welcomed coach Hirata Reiji to spend one week at the institution’s facilities in Miranda de Ebro, at special request from the Japanese football federation. He visited in March, the same month in which two Japanese youngsters were invited to spend time training with the club’s youth academy.

Actions such as these are helping to promote CD Mirandés’ brand abroad, especially since coach Hirata left Spain very impressed by what he saw. He was able to witness the training methodology used at CD Mirandés and had the chance to speak with first-team coach Joseba Etxeberria, as well as other members of the sporting department.

During his visit, Hirata outlined why he had wanted to come to see the LaLiga SmartBank team, after having organised a similar educational visit last season to spend time with RCD Espanyol and FC Barcelona’s women’s team. As the Japanese coach explained: “My hometown is very similar in size to Miranda de Ebro. There is also a professional club there and I want to learn about the structure of CD Mirandés and how to apply it. The general level of the coaches in LaLiga is very high. That's why we in Japan are very interested in and admire their work. I am fascinated by how they explain differentiated work in training and then manage to apply all this individualised work to the tactics of a match.”

Hirata was also keen to return to Spain because he was intrigued by the fact that LaLiga is unique in offering sporting resources to support all 42 of the teams in LaLiga Santander and LaLiga SmartBank, such as the state-of-the-art Mediacoach analysis tool. On this, he said: “LaLiga provides its clubs with all kinds of tools, both in a technological and general sports science sense. The culture of Spanish football and LaLiga is much more suited to preparing the players for the highest level of competition.”

For the directors at the Estadio Municipal de Anduva, the visit of coach Hirata was an honour and also a way to show off their club abroad. On their reaction to receiving such a request from the Japanese football federation, the club stated: “We thought it would be a great way to progress in our internationalisation project, by getting to know first-hand the technical and tactical work of Japanese football, while showing, in this case to Hirata Reiji, the work of CD Mirandés as an example of a professional club in LaLiga. Our intention was to highlight the work done by the sporting department and the coaching staff in the day-to-day running of the team, as well as the scouting work in the office, the application of our training methodology and the analysis of the opposition during the week prior to a match.”

The visit was also eye-opening for CD Mirandés, as the knowledge sharing experience worked both ways and offered the club’s sporting department insight into how the Asian market works. “Having a Japanese coach visit was very educational for our club in order to learn first-hand how things work in other leagues,” the club said.

Hirata Reiji wasn’t the only visitor CD Mirandés had from Japan in the month of March, as two young footballers from the country also came to Miranda de Ebro to work with the youth academy there. One was Raimu Matsuno who trained with one of the club’s Cadete youth teams, while the other was Erumu Kuma, who honed his skills with one of the Juvenil sides.

Both players had a fruitful stay and were able to train under the CD Mirandés methodology and see how professional football works in Spain. Following the visit of coach Hirata, this was another opportunity for the club to build connections with the Japanese market.

Now, CD Mirandés will look to keep growing the club’s brand in Japan, Asia and beyond. The club explained: “The next plans are to identify CD Mirandés fans outside Spain and understand their interests. This is when a club like ours values being part of a structure like LaLiga, where there are numerous projects that we are joining in order to make our brand more visible abroad. Following this analysis and identification of our fans, we will be able to carry out more actions like this one with Mr. Hirata, and target them at a more specific audience, not only in the Asian market but also in other international markets.”