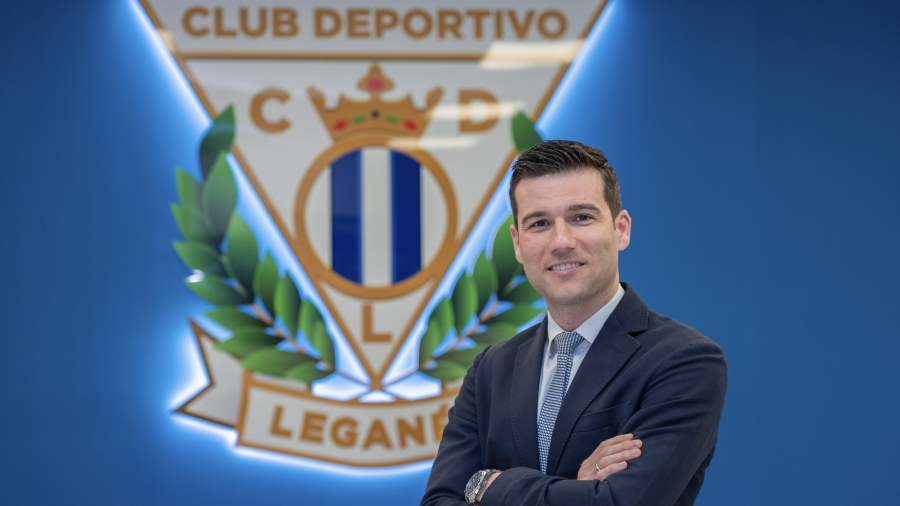 CD Leganés: “CVC is a great opportunity and responsibility”

Martín Ortega, the general director of CD Leganés, is aware of how essential digitalisation is for growing as an institution. In this sense, the LaLiga SmartBank club has put a lot of time and effort into processes that will help them to learn as much as possible about the behaviour, concerns and interests of their supporters, to provide them with a better service, to grow digitally and to attract more fans and sponsors. Meanwhile, internationalisation is another fundamental pillar of the club's growth, with Japan the leading market for positioning the brand abroad.

- What is the club's roadmap in a business sense?

The business roadmap depends on exactly which area of the business we’re referring to. If we’re talking, for example, about significant departments such as ticketing, season tickets, retail or sponsorships, the club's plan for growing these sections is clear. It’s about looking after and getting to know our season ticket holders better and growing digitally, both domestically and internationally, to continue bringing in more fans and sponsors.

Something else that has been important for the club has been the selling and purchasing of players’ rights, as this is an area which generates a lot of revenue. In the short-term and medium- term, we don’t want to only focus on players who are already established, as we also want to discover and develop young talents, both at a national and international level. We’re satisfied with how this is going, because three or four years ago we didn’t have any players from our youth academy in our first team, but today we have three: Javier Avilés, who is on loan in Portugal, Naim García and Seydouba Cissé. Now, what are the next steps? It’s for the sporting department of the first team and those managing the youth academy to have all the resources necessary to work in the best possible conditions. This is a vital part of the club, so we can’t leave them lacking any essential resources.

As for another area of the business to mention, logically it’s the one that is the greatest source of income for the club, which is the centralised sale of audiovisual rights; there, we go hand in hand with LaLiga.

- In general terms, what is the club doing to increase its business?

To grow, we are backing digitalisation and we’re now going to invest even more in this area through the Boost LaLiga project. We must know as much as possible about the behaviour, concerns and interests of our fans so that we can offer them a better service, not only on matchdays but throughout the rest of the week too. In this, we’re working with LaLiga on the Data-Driven project, which is helping us to improve our fan support services and to boost sales in the club shop and the assets we offer to sponsors.

It is worth highlighting that the number of people employed in the communication and marketing departments has increased over the past two years, which is allowing us to work even more on our digital content and, in turn, to connect with audiences that were previously difficult to reach from an international point of view.

- After four seasons in a row in LaLiga Santander, this is now the club’s second season in LaLiga SmartBank. How has the club adapted financially to the relegation to this division? In terms of sponsors and/or establishing new commercial agreements, has the change been noticeable?

It hasn’t been easy to adapt, given that the income from the sale of audiovisual rights is the club's biggest source of income. When you move down from LaLiga Santander to LaLiga SmartBank, that income is considerably reduced.

In our first season after being relegated to LaLiga SmartBank, between the relegation support granted by LaLiga, a reduction in player salaries and some other slight adjustments that we made, the club was able to have a good season and avoid losses. In this second season at this level, we no longer have the relegation support so, logically, we have had to keep adjusting the cost of the playing squad and exercise greater control over the rest of the expenses, to balance the accounts.

As far as sponsors are concerned, we’re quite happy. Thanks to the work done in previous years, and despite the pandemic and the relegation, we have managed to renew with more than 90 percent of the brands that were sponsoring us. Domestically, we have a solid base to work from for the future, while on the international level there is still some way to go.

- Thanks to the pre-match posters published on the club's social media, CD Leganés has reached many corners of the world. How is it possible for a city of almost 200,000 inhabitants to have 1,000,000 followers on social networks?

Undoubtedly, this comes down to using social media in a good way. CD Leganés is not a team that wins trophies or that has world-class players in its ranks, while we were only in LaLiga Santander for four years, but there is a way to balance that through social media. Through social media, we have managed to reach many more people than the population of this city. How has this been achieved? Well, the club has been working on this for 13 years, shaping its identity, promoting its values and proving that football clubs are more than just their sporting results.

- In terms of sponsorship and internationalisation, what does having a player like Gaku Shibasaki mean for the club?

With sponsorship, we still have a long way to go. It's a pity that [Gaku] only arrived at the club at the time when we went down to LaLiga SmartBank, because the possibilities would have been much greater if we were in LaLiga Santander. Moreover, the fact that our sponsorship portfolio and all the spaces on our kit were already almost full has made it impossible for Japanese brands to come in. Still, we have organised marketing campaigns that have allowed us to position ourselves in Japan through social media, through merchandising and through some experiences we carried out with Gaku. All of this has made Japan our primary market from an international point of view. We must keep working hard on positioning our brand there and on making the most of the interest we have generated.

Looking at this from an internationalisation point of view, [Gaku] has enabled us to reach hundreds of thousands of people in Japan. One example of a success story is with the sale of our Super Pepino mascot toy, which has been very well received in Japan. Another example is the increase in the number of Japanese players we have received in our academy, where they come to train from a technical and sporting point of view.

- Which are the international markets that provide the greatest returns for the club, and do you have plans to reach more places through specific campaigns or initiatives?

Japan is currently our main international market. As for the rest of the world, we’re taking an important step forward in the Middle East, where we have sealed various agreements in the United Arab Emirates and in Saudi Arabia. We’re seeing very positive growth there. Then, by working with LaLiga, there are also collaboration agreements in countries such as Mexico and Nigeria.

Internationally, we have received many business proposals, but the important thing is to know which are the right projects and which are not. We must put quality before quantity and make sure that the brand is put to good use and, above all, that these experiences truly add value and have a positive impact on people's lives.

- When it comes to the fanbase, how is the club working to reach new audiences and, particularly, to connect with younger generations?

We think it is essential to have an extensive knowledge of who the fans are. We need to know what their behaviour is, what their interests are and what their concerns are, to offer them the best possible service 24 hours a day. We are following LaLiga’s lead with the Data-Driven, CRM, app and website projects as we work on all these tools that are both the present and the future.

As for the younger generations, we recently rolled out a profile on TikTok, which has been very well received by this age group, while we also recently carried out surveys with people in the Generation Z age group to understand their tastes and interests better and, from there, be able to interact with them much better.

- How does CD Leganés view the agreement with CVC, also known as Boost LaLiga? What projects does the club have in mind?

We see the agreement with CVC as being a great opportunity and responsibility. This is a time to be brave and ambitious and to carry out projects that you wouldn’t dare or couldn’t try to in the past. Put simply, we believe that the agreement with CVC will lead LaLiga and the clubs into a new dimension of growth.

Looking at it from an infrastructure point of view, it’s vital that we expand, enhance and cover our stadium, as well as completing our sporting complex. We want the stadium experience to not be limited to a matchday, but to be a week-long thing, which is achieved through catering and leisure facilities. The aim is for the fan experience to be better and more complete. As for the sporting complex, we have already completed the first phase and we would like to move on with the second phase with the creation of three new football pitches, new dressing rooms, a gym, a restaurant and a residence. To carry out these projects, it is essential that the club receives greater legal security regarding possession of the property assets, for example, with a long-term concession. Why? Because the assets are municipal. We’re in ongoing discussions with the Leganés City Council to clarify this legal situation regarding the assets.

The club also intends to keep growing in terms of digitalisation, internationalisation and technology, as we have already been doing until now, but we want to do so on a much larger scale, obviously leaning on the advice and recommendations we receive from LaLiga.