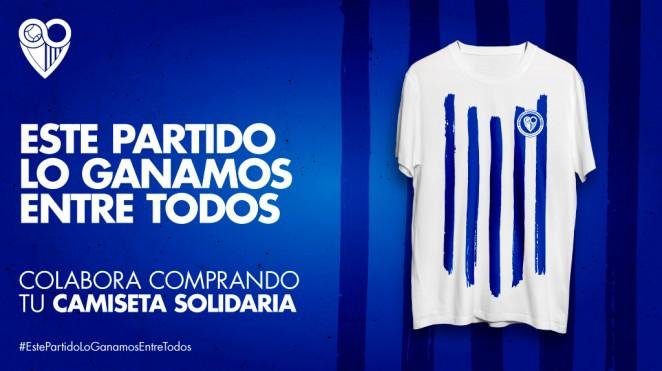 While the competition has been postponed, all clubs playing in LaLiga Santander and LaLiga SmartBank have been developing creative initiatives to support the fight against COVID-19.

Financial donations, providing medical supplies and food, offering stadium usage to the authorities and taking part in online initiatives like #LaLigaSantanderChallenge are just some of the ways clubs are showing solidarity during this pandemic while maintaining connections with their fans.

With each gesture raising money or awareness for local causes, clubs are continuing to find new ways to engage. Across Spain, Cádiz CF, Málaga CF and Deportivo Alavés are extending their efforts by producing solidarity shirts, giving fans the opportunity to show their commitment both to their club and to helping wider society.

Cádiz CF will wear white and blue in their next match
LaLiga SmartBank leaders Cádiz CF have joined forces with Spanish health services in the fight against the virus, launching a special-edition shirt that pays tribute to the different public groups that have been so active in recent weeks.

“It is one of the many solidarity initiatives than the club has been developing since COVID-19 emerged," said club President Manuel Vizcaíno.

"We wanted to pay tribute to the healthcare groups - doctots, nurses, social workers, for example - by using the white and blue colors on our shirt, since these are the representative colors of the health services," explains Vizcaíno.

"In addition, other public services have authorized us to include their logos on the shirt so that we can acknowledge their efforts. These include, Pharmacists, Local and National Police, Firefighters, Operation Balmis [the public safety operation carried out by the Spanish army], the Civil Guard and Civil Defence, which will all appear alongside the Cádiz CF shield,” Vizcaíno continued.

The Andalusian club has seen an immediate positive reception among its fans since announcing the new shirt. “It has been overwhelming", Vizcaíno said. "In just 3 hours almost 500 orders were made and it is something that is growing not only among the fans of Cádiz CF, but from fans from all over Spain who are interested in this initiative.”

The President confirmed that the shirt will be worn by the club during the first match after the competition returns, adding: “In the first game we can play, we will wear this shirt and we will also wear a black armband in memory of Michael Robinson, who was adviser to our club."

All funds raised from shirt sales will go to the Ministry of Health, as was the case with the Carranza eSports Trophy organised by the club during this quarantine period and was carried out with the collaboration of LaLiga SmartBank clubs.

Among other measures developed by the club, a specific COVID-19 account was created on social networks, which presents all relevant information from the different municipalities in the province of Cádiz.

Vizcaíno added: "We want to become, to a certain extent, a transmittor for all local, autonomous and national health organisations. All followers of our official channels should have relevant first-hand information."

Málaga CF: Donating proceeds to 13 social projects
Málaga CF's 'Solidarity shirt' has been designed in the typical blue and white stripes of the club, but carries the message that has been adopted by the Spanish football community during this pandemic: “Este partido ganamos entre todos (We will win this match together)”.

"It is a social project to help people who are have been left in a situation of social emergency by this isolation," says Lucas Rodríguez, coordinator of the MCF Foundation, which has promoted this project. “We put the solidarity shirt on sale on March 30 and in just the first week we sold 1,550 shirts. The response from the fans has been incredible.”

“With the money that we raise, we hope to do our bit for the many local families who are in a serious situation can receive help in the form of basic food and hygiene products,” Rodríguez continued.
The sale of the €9.95 shirts (which will be sent to fans after the current ‘Stay at Home’ measures have ended) is being used to support a total of 13 associations providing essential care in the Andalusia community and beyond.

Deportivo Alavés: Raising money for local nursing colleges
In the northern Basque community, Deportivo Alavés has created its own special-edition shirt to acknowledge the work of OSI Araba, the healthcare network of the local Vitoria and Álava regions.

The Baskonia-Alavés Group, which also incorporates the Saski Baskonia basketball team, created the initiative as a public show of thanks for the efforts that local health agencies are making in these times of crisis.

The shirts, on sale via the club’s online shop, will raise funds to help the Nursing College Organisation, which brings together the community’s various nursing colleges that are fighting COVID-19.

The OSI Araba name will also appear on the front of the shirts worn by the first team in the first match after LaLiga Santander returns.

In addition, the club has created a range of wristbands bearing the words "Aplauso Sanitario (Applause for health workers)", which can also be purchased via the club website with all proceeds going to the same initiatives.