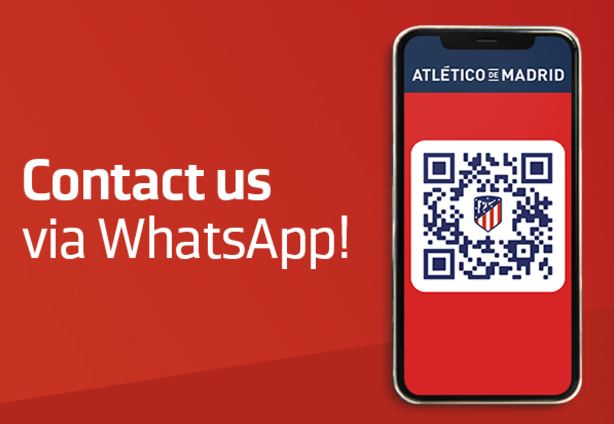 In recent years Atlético de Madrid has grown into one of football’s strongest sides, challenging regularly for the LaLiga Santander title as well as European trophies. This sporting success has coincided with the club’s global push to become closer to its supporters and offer them new experiences, both inside the Wanda Metropolitano stadium and in hundreds of countries around the world.

To enable this, the club has created a department of IT and digital development which is now central to every project that the club undertakes. It has been responsible for creating a connected light show within its stadium for example, building a match atmosphere unlike any other.

Its latest project, a virtual assistant using WhatsApp, allows the club to take the next step in fan relations by creating personalised and relevant communications to its followers at any time of day.

As Alejandro Ugarrio, the head of digital development at Atlético de Madrid, explained: “We’re increasingly a global club and, therefore, we have to offer global solutions to our fans around the world. We realised that there was a need to be able to reply to fans who are in other time zones and who use different languages. The time zone issue was particularly complicated because we have office hours that are in line with Spanish hours.”

The club looked at various platforms in its search for a 24/7 communications channel. “The one that best fitted our needs was WhatsApp, given the global reach it has,” said Ugarrio. “Plus, WhatsApp had just launched its Business API. This is where we’ve programmed a new assistant that allows the sending of automatic replies,” added the tech director.

The first interaction with the club on WhatsApp

Atlético de Madrid supporters who use the virtual assistant can start a conversation by messaging the number +34690372769 on WhatsApp. At this point, a video message from João Félix appears and he welcomes them to the official WhatsApp of Atlético Madrid, offering them a language selection option which can be operated by replying with a number. Fans can then select a number from a list of topics to learn more about various areas of the club, such as “Tickets and calendar”, “Parking” or “Store and offers”.

As the needs of fans are constantly changing, club officials are constantly listening to feedback from users and will continue to adapt the platform in order to offer the best response possible.

“We carried out an exhaustive study to work out the kinds of questions that our fans had tended to ask at the club offices, through email or through any other kinds of communication,” added Ugarrio.

“By creating a data tree to capture these questions and possible answers, we could respond to as many of them as possible. When a question hasn’t been answered, we’ve studied the conversations where the adequate response hasn’t been offered for the fans’ questions and we then work on the next iteration.”

In the short time that the service has been available, Ugarrio noted, “the feedback we’ve received has been very good.”

“In just a couple of months and with a beta version, we’ve already had more than 46,000 messages that have been responded to,” he continued. “Of these messages, 35% have come at times when our customer service office wasn’t open, which is evidence of the demand for a service at that time, a demand we’re now meeting.

“Plus, 36% of the traffic has gone towards our online ticketing space. As for the countries with the highest usage, Spain, Mexico, Ecuador, Argentina and Colombia have been the countries from which we’ve had the most interactions.”

Facilitating communication with and for the fans

For a club with the global profile that Atlético de Madrid has built, it is essential to be present on all the channels and platforms where supporters want to interact with the club. By being on WhatsApp, for example, the club is on a platform that is constantly being used by people for chatting with friends and family.

“We’re very aware of the kinds of initiatives that are being started around the world,” added Ugarrio. “We’re looking for the best practice in all sectors and we’re bringing that to our relationship with our fans, which is very personal. We make all of our services very personal so that fans feel like they’re created for them.”

A department that is involved in all club projects

Technology can offer a lot of information about those who use the club’s services and, in most cases, this can be used to improve their experience. “It’s not about collecting data just for the sake of it, as it’s about collecting data if it can make interaction with the club better for everyone,” Ugarrio stated. “This is what we do at Atlético de Madrid. Because of the type of club we are, we work hard to be very close to our fans.”