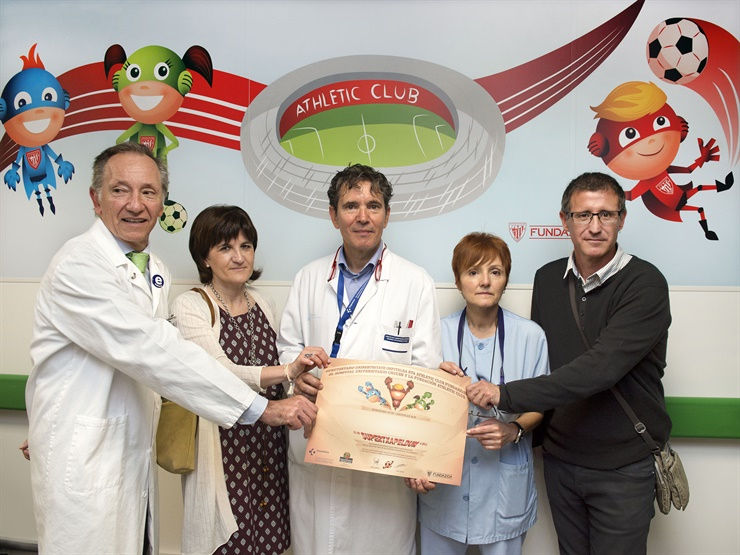 Athletic Club bring the soul of football to paediatric hospitals

There are projects which show the great ability football has to conquer the hearts of society.

The Athletic Club Foundation, part of one of LaLiga’s traditional heavyweights, have developed the second phase of a project that does just that.

In collaboration with the Paediatric Innovations Department at the Cruces University Hospital in the city of Bilbao, the Rojiblancos are pursuing one of the noblest causes there is.

They are committed to a project that uses football to transform the way in which children face up to disease.

Given that ‘the recovery of children depends to a large extent on behaviour’, they have looked for ways to infuse sick youngsters with positive energy.

On the one hand, they present them with various pieces of club kit and posters, signed by Athletic Club players, in a bid to give strength to children who face treatment.

Elsewhere, waiting rooms, X-ray rooms and various other places in the department are decorated with motifs and logos of the Bilbao club to make children more comfortable and happy in their environment.

There are other extraordinary ideas which the charitable organisation hope to introduce as the project progresses.

“Let’s take it step by step, we will also be handing out club notebooks and other club reading material for the paediatric emergency waiting room,” Mendiguren added.

Stickets are distributed across all health centres in the province of Bizkaia in the Basque Country, with Cruces Hospital as its epicentre.

“Workers tell us that our main objective is being achieved because the children are calmer, they ask about the murals and images which decorated their rooms and the same thing happens with the parents.”

He also wanted to reserve praise for the work that is being done both in the hospital and among the club’s players for the worthwhile cause.

“The hospital staff have showcased their talent, work and enthusiasm from the first day because they really believe in this project and its benefits,” stated Mendiguren.

“We also know that several players go to the hospital regularly to visit the children which is important.”

That is the case with players such as Oscar de Marcos, who stops in every Friday to see the kids.

It is a heartfelt project which emphasises the spirit of the club and is capable of transmitting positive energy to children who need it most through the benefits of a sport that invokes such strong passions.