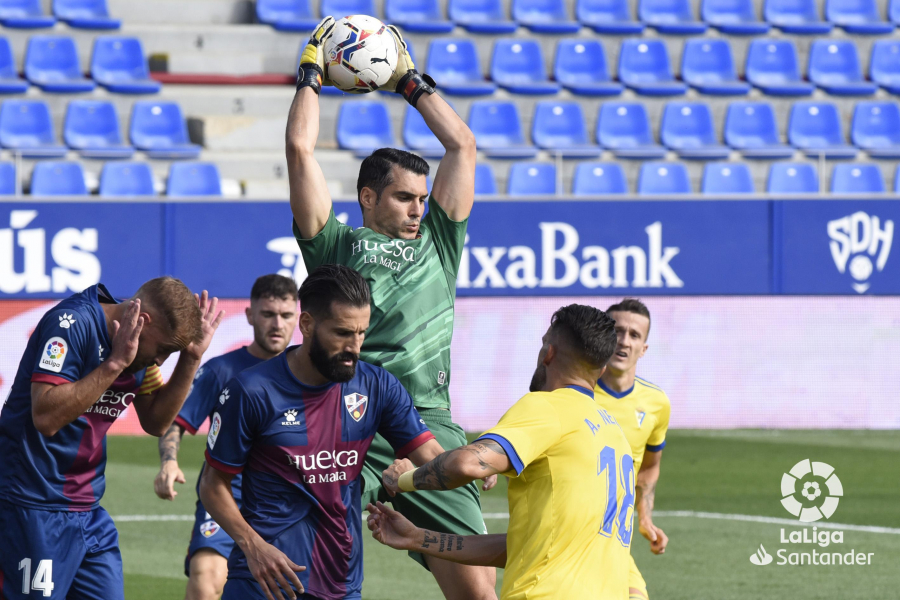 Andrés Fernández: the goalkeeper who combines football with a passion for technology

For elite athletes, professional careers are short. Even in the rare case of footballers like Alberto Cifuentes (Cádiz CF), Nino (Elche CF), Joaquín (Real Betis) or Jorge Molina (Granada CF) who continue to compete at the top level until their late 30s or early 40s, there is a need to consider what lies in the decades after retirement.

Many choose to remain linked to football through coaching or punditry, while others return to topics they had studied before entering the game. However, there is also the possibility of combining the two options. Andrés Fernández, the 33-year-old SD Huesca goalkeeper is an example in this regard, combining appearances for the LaLiga Santander club with building one of Spain’s leading artificial intelligence companies.

Combining football and computing
After training in different clubs across Spain, Fernández began his professional career at CD Tenerife, before moving to RCD Mallorca and CA Osasuna, where he made his debut in LaLiga. In so doing, Fernández left Madrid’s Higher Technical School of Industrial Engineering, where he had been studying.

“At home, before we started playing they forced us to study,” Fernández said. “He was the one who brought the first computers and encouraged us to do all kinds of activities that opened our minds."

As the goalkeeper could not dedicate himself fully to thinking and creating innovations, Fernández decided that he would help others who could, first as a startup investor and then as a founding partner of Biyectiva, a pioneering company in the world of artificial intelligence and video analysis.

Becoming a technology leader in Europe
Fernández, who has also played for clubs including Granada CF and Villarreal CF, teamed up with engineers Felipe Segura and Rubén Martínez to take the venture forward. "They are the ones who carry the day to day, but we regularly review the general situation and the issues to be addressed," he added.

The company is based in Cartagena and since its creation two years ago, it has tripled its workforce. It is dedicated to the development of AI to tackle issues such as the fight against audiovisual piracy, automatic license plate recognition for car parking or control of employee entry with facial recognition. Already widely recognised as an innovator in Spain, the team is focused on becoming a reference in Europe.

“Andrés' role was key because he had the vision to see something that we didn't even see,” Segura explained. “When it comes to motivating us and giving us an external point of view, he has a gift. In addition, his profile is key because it has created huge contact networks. Barely a week goes by without him introducing us to someone.”

When it comes to football, Fernández is looking to start a project that links the world of technology with sports. His expertise is already widely known within the clubs, with many colleagues taking advantage of his knowledge to solve everyday technology challenges. “They tend to ask for my advice before making a purchase, but more than anything when their Mac requests an update and they aren’t sure what to do,” he commented.

A business project for the future
As of today, Fernández cannot apply all of his focus to his company as his first priority remains his football career. Having a strict and self-imposed work and rest routine, the time available for Biyectiva is smaller still.

But whatever the future has in store, the goalkeeper will remain linked to the world of technology and entrepreneurship by supporting the next wave of innovations. Whether through his current business or a new venture, Fernández knows that he has multiple options once the time comes to hang up his gloves.

“All of this is over very soon and there is a big world to explore,” he concluded.