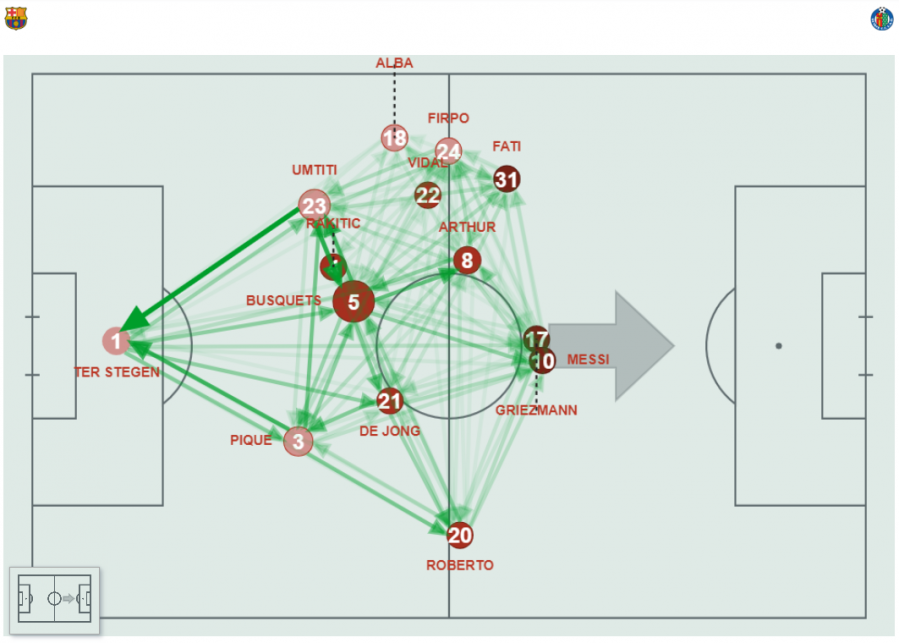 It’s common to see coaches pointing to their heads with their finger during matches, urging their players to think. But pushing a team to think as a collective is a different proposition altogether.

This challenge was recently taken up by the creators of Mediacoach, the real-time analytics platform available to all LaLiga clubs.

A group of researchers presented a study at the most recent OptaPro Forum in London which analyses how a team thinks as a group. This study was led by Javier M. Buldú and which featured the collaboration of LaLiga’s sporting investigations department and the Mediacoach team.

The idea was to compare footballers to neurons and analyse how the different players interrelate through passes just like a neuronal synapse. The result is a unique and deep level of insight that can help Spanish professional clubs to take performances to the next level.

Assessing passing style
Identifying patterns in a team’s own play or in that of an opponent can clearly help to boost collective performance. In the following graphic, for example, the ‘mind map’ of Quique Setién’s FC Barcelona is compared to that of José Bordalás’ Getafe CF from their meeting in the 24th round of the 2019/20 LaLiga Santander season, when FC Barcelona won the match 2-1.

In this graphic, the average position of the players is shown as well as the passing map. Greater thickness or colour represents a greater number of passes, but the analysis must also focus on the types of passes as well as the quantity. By introducing further indicators of style, it’s possible to have an even clearer vision of how a team thinks.

Mediacoach has developed a series of indicators that can be selected and that can analyse the footballing brain of teams even deeper.

In this control panel, it’s possible to look at the differences in style between all LaLiga Santander teams, right up to the 27th round of the season. The findings show that FC Barcelona (BAR) top the first five columns – initiative in the play, ratio of possession for/against, offensive elaboration, rate of circulation and rate of recovery.

Getafe CF (GET), on the other hand, operates differently on the pitch. After 27 matches, the Community of Madrid side is the one with the lowest offensive elaboration and rate of circulation. However, it has the greatest percentage of long passes, with 27% of passes covering more than 30 metres.

FC Barcelona, meanwhile, is bottom of this column with the lowest percentage of long passes in the league, only going over 30 metres on 7% of their passes.

These numbers show that there are very different ways of thinking about football and that these ways don’t necessarily correlate with performance, proven by the fact that both FC Barcelona and Getafe CF find themselves in the top five of the standings.

Offensive and defensive analysis
In the next graphic, the study shows visual representation of how all LaLiga Santander teams are performing offensively and defensively, looking at both finishing efficiency and chance creation. FC Barcelona is shown to create more chances and also finish lots of them, while Getafe CF doesn’t create as many yet finishes a lot of the opportunities that are produced.

To analyse defensive styles, the study looks at the opposition’s finishing efficiency and chance prevention, finding both teams don’t give away many chances, but that they do concede goals in many of these cases.

The other teams of LaLiga Santander are also placed in these graphs and this shows that other teams currently in the top five of the league table – Real Madrid, Sevilla FC and Real Sociedad – are amongst the strongest in terms of denying chances and not conceding.

Looking at Real Madrid, Sevilla FC and Real Sociedad more closely, the study highlights that Real Madrid is the second highest-ranked in the first four columns – initiative in the play, ratio of possession for/against, offensive play and rate of pass circulation. Sevilla FC has a similar way of playing and is third in these four columns, while Real Sociedad, has a lower passing rate but is still well above the league average.

The analysis provides a strong suggestion that taking the initiative on the field, having a high ratio of possession, high levels of passing and recovering the ball is generally synonymous with being high up in the standings, with Getafe CF being the exception to this rule.

Analysis within teams identifies collective style
The study then compares teams internally, instead of with other teams, to determine a team’s singular style. This can be calculated in five steps.

Firstly, the football pitch is divided into smaller sections or matrices.

Secondly, a passing map of all passes made between these sections is created, with the lines showing the direction of the passes.

Thirdly, these sections are joined together to establish a pattern of play for each team from each match. Fourth, all the actions that didn’t end up in a dangerous chance, shot or goal are removed. Then, fifth and finally, the optimal pattern of combination play for a team is presented.

This can be a very useful task for teams to carry out as they prepare for their next fixtures. As Roberto López, the coordinator of the Mediacoach project and of the sporting investigation department, explains: “If you can establish your optimal pattern while neutralising the desired pattern of an opponent then your chance of taking the three points is significantly increased.”

As part of the study being led by Javier M. Buldú in collaboration with Mediacoach, the group of researchers have started this analysis by looking at the 2018/19 season. After analysing all matches from a season, the passing networks of each team in each match can be matched against each other. This ultimately helps identify tendencies to see if certain behaviour is repeated.

“Nowadays, it’s practically impossible to find an area of knowledge that hasn’t undergone changes as a result of developments in science and it’s no different with football,” says Fabio Nevado, Mediacoach football analyst.

It’s also possible to compare these passing networks with other teams from LaLiga and this second level of comparison can highlight just how different certain teams are from one another. By doing this and by then looking at the data from individual matches, the analysts can determine if either team was able to impose its particular style on their opponent in that game. The results of this analysis for the 2018/19 LaLiga Santander season can be seen in the following graphic.

When looking back on the 2018/19 campaign, one thing that stands out is that the top three teams in the final standings – FC Barcelona, Atlético de Madrid and Real Madrid – were the teams who were able to impose their particular styles the most. There is a significant difference between how often these three teams were able to do so and how often the other sides could do so.

Where teams cannot impose their own style, the study finds that adaptability is key. In this sense, Getafe CF stands out as it took part in so many games last season where neither of the two teams imposed their usual way of playing.

These conclusions are just the beginning of a deeper level of analysis that is emerging within Spanish football and can put LaLiga clubs at an advantage. The question of how a team thinks collectively has been discussed extensively in football but thanks to tools such as Mediacoach, it is becoming an easier question to answer.