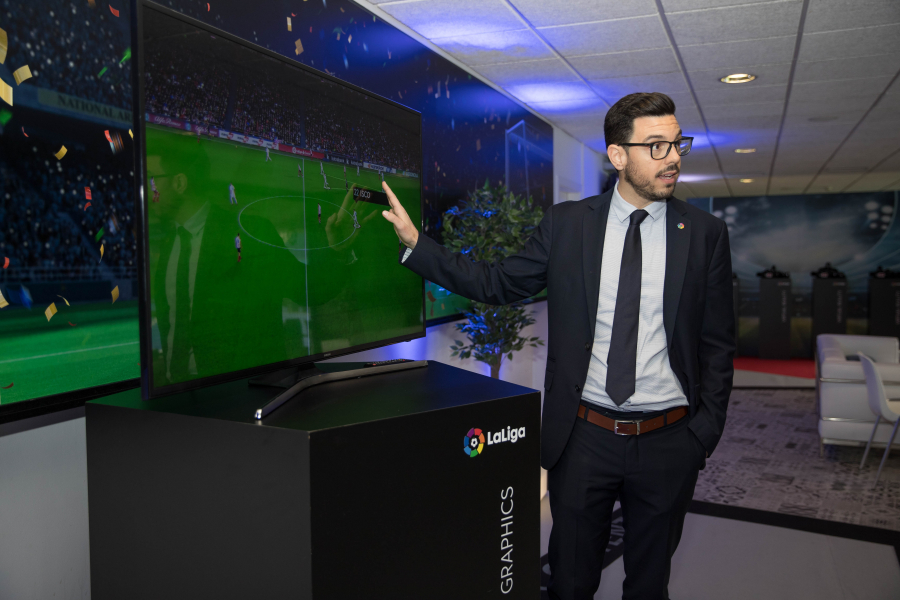 A unique audiovisual product, from all angles

LaLiga offers its millions of fans an audiovisual product in 183 countries across 88 international broadcasters to bring them the action from the best competition in the world.

Matches are available in 4K HDR, can be viewed via aerial cameras and several unique replay angles, including 360 degree views.

Those are the many details that make a LaLiga broadcast so enjoyable as they continue to search for excellence.

Melcior Soler, director of LaLiga’s audiovisual department, explains the vision within the group.

“We are convinced that we have to continue surprising our viewers all over the world with new experiences as they watch the games and that happens through having the best production infrastructure within each stadium,” he said.

“Our goal is to have the greatest technical resources all in stadiums to achieve an authentic entertainment experience.”

Mediapro also work in close contact with the audiovisual department, with general manager Daniel Margalef keen to pay tribute to the hard work of the talented teams involved.

“At this time, we have the the best professionals working on the project in all areas,” he said.

“There are filmmakers, producers, storytellers, camera operators, technicians… a real dream team of television for the best product that is LaLiga football.

“It is important to be the first league in the world who are producing the most prominent games in 4K HDR, thus giving viewers the best possible image quality available on the market at this time.”

Margalef was also keen to draw attention to the fact that Mediapro and LaLiga are leading the way for others with their innovations in that regard.

“No other league has nine fixed aerial cameras installing in their stadiums and that number will reach 12 by the end of October,” he explained.

“It will be about 18 by the end of the current season and we are utilising technology similar to Intel True View, which allows replays to be viewed from virtually any point on the field and is already available in six stadiums.”

The new San Mames and the Mestalla are the latest two venues to incorporate the 360 degree viewing angles.

With Margalef insisting that it was important to maintain good relationships with clubs in order to get the best out of the technology, Soler was in full agreement.

“Their willingness to implement the measures contained in the regulation [for television broadcasting] has been exemplary since we started this project,” he said.

“Many improvements have also came about as a result of proposals, suggestions and advice, coming from many sessions which were organised.

“Without their [the clubs] commitment, it wouldn’t have been possible to carry out this work that has placed our competition at a higher level in terms of  audiovisual perception.

“We have reinforced all types of production, incorporating new resources such as reverse angle or goal-line cameras.

“In addition, the accessibility of international operators in the games has been a help.”

Pablo Ruiz is responsible for production at Mediapro and he outlined just how many responsibilities they have to consider when providing a live broadcast.

“Thanks to the regulations and the collaboration with clubs, we have been able to adapt the stadiums in order to improve our product,” he explained.

“These improvements have been comprehensive: taking into account things like minimum and maximum height of the grass, the best positions for the cameras, where to put cables, how to deal with the advertising around the pitch, the lighting…

“We regularly insert graphics into games too thanks to player tracking data and live tactical analysis.”

His colleague Oscar Lago, responsible for the implementation of Mediapro, picked up on that thread, giving an insight into the technical work that goes into providing the product.

“The use of our virtual graphics sets us apart from other competitions who present their games in a different manner,” he stated.

“We do a lot of preliminary work beforehand to ensure things run well, we evaluate things weekly and propose improvements for each specific moment.

“We have a style guide that outlines how to produce each game and the most important concept in that manual is to always remain impartial at all times.”

Lago also revealed how a detailed knowledge of the game is required to ensure that things go off without a hitch during a live broadcast.

“Because of its unpredictable nature, football is one of the most difficult sports to cover,” he explained.

“A goal can occur in a few seconds from a situation that might seem impossible to score from.

“To manage it well, it is necessary to know football in depth, have experience and not stop learning, continuing to evolve.

“It is also very important to keep your concentration throughout every moment of the game. All your senses must be focused on the mach.

“Teamwork is also essential to ensure that the product is of the highest possible quality.”

It is all part of the continuous search for excellence when it comes to producing the best possible LaLiga broadcasts, although as Margalef acknowledged, there are still improvements that can be made.

“One of the biggest challenges will be the ability to offer viewers a personalised audiovisual experience based on their tastes and preferences,” he said.

“We are always looking at other ways of watching and listening to football, which is a big part of our future plans, were virtual reality and immersive audio will play a prominent part.”