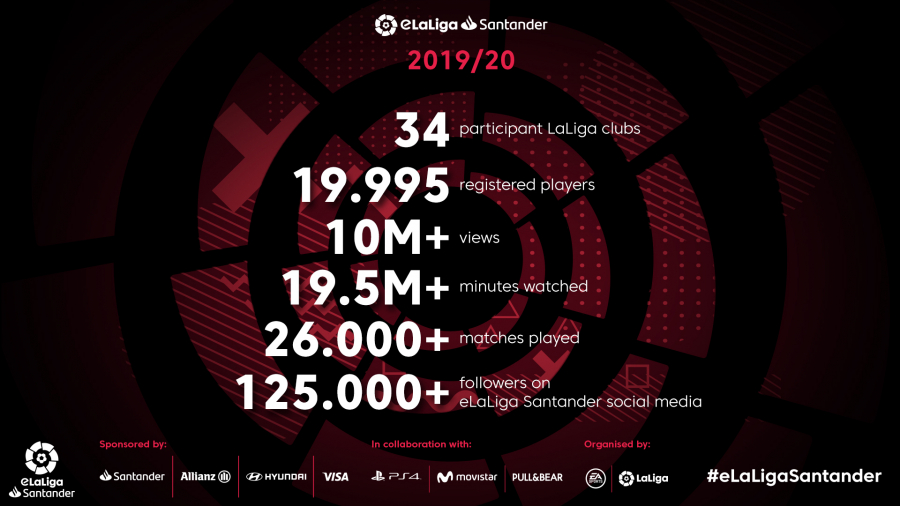 The 2019/20 eLaLiga Santander season reached a successful conclusion this month, achieving a greater impact with fans and commercial partners than ever before while negotiating an unexpected pause due to the COVID-19 pandemic.

Now in its third season, LaLiga’s official eSports competition, based on the EA SPORTS FIFA game, saw participation from 19,995 players during the campaign, taking part in over 26,000 matches. With games broadcast across LaLiga’s social media channels, there were more than 10 million views over the season, with a total of over 19.5 million minutes being consumed.

As the popularity of eSports grows, so does the participation of clubs. This year a total of 34 LaLiga clubs were represented in the competition by 56 players, who joined thousands of amateur players in competing for the biggest eSports prize in Spain.

The competition, which is created alongside EA Sports, also received a wider range of partners than in previous seasons, with support from title sponsor Banco Santander, Allianz, Hyundai, VISA, Play Station España, Movistar and Pull&Bear. Underlining the momentum that the competition has gained, LaLiga recently signed a 10-year agreement with EA Sports, citing the international growth of eSports as one of the key objectives of the renewed partnership.

“This season’s competition showed the force that eSports has become,” said Alfredo Bermejo, digital strategy director at LaLiga. “Not only in terms of viewers, our interactions were also extremely high around our matches. We saw some unforgettable moments and created content that engages our audiences as well as providing value to our partners.”

A unique finale
These results were achieved after the competition had to be halted due to the global pandemic, which prohibited public events from taking place. After being postponed in March, eLaLiga Santander resumed on June 8th in a slightly revamped format that prioritised health and safety – with all matches taking place virtually.

A total of 16 players reached the final tournament, which was eventually won by a surprise candidate, 16-year old player leazy-_-neat110. The teenager from Malaga received €40,000 as the eLaLiga Santander champion.

“The winnings reflect the talent and entertainment that these players provide,” Bermejo noted. “eLaLiga Santander has become a competition that any player wants to win.”

Global growth
Reflecting its growing status, many of the most recognisable voices in Spanish football took part in the competition, including leading commentators from eSports and from traditional football. Among them were DJMariio, Ibai Llanos, Miguel Ángel Román, José Sanchís, Sergio Ferra, Héctor Ruiz, Jaume Naveira, Ulises Prieto, Sergio García-Moreno and Rodrigo Fáez.

Outside of the matches themselves, LaLiga utilised this talent to create regular content for its social media channels, including Instagram, Twitch, Twitter and YouTube. Featuring player interviews, match highlights and selected goals, some of which supported by partners, this content has helped build an online following for the competition which has surpassed 125,000 people.

“It’s a sports competition but also an online community,” Bermejo added. “Through the league we are also giving fans a window to discover our clubs and our other offerings, which extends the appeal of the LaLiga brand.”

With audience interest clearly increasing, LaLiga plans to accelerate its eSports offering for the 2020/21 season, reaching fans both in Spain and abroad.

“The last few months have shown the value of strong digital activations and eSports can be the jewel in the crown,” Bermejo concluded. “It provides an experience that we want to offer to all of our global fans.”