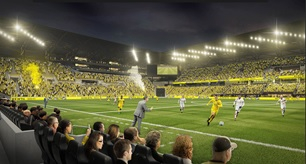 We have long advocated for LaLiga to allow the introduction of “pitchside” seats (similar to courtside seats in basketball).  MLS’ Columbus Crew have three types of Field Club seating, including “Player Box” seating, where fans sit adjacent to the team’s bench. The season tickets go for $6500 per seat. The club itself provides a bar like atmosphere while still maintaining close proximity to the pitch. Like has been done is many NFL stadiums, players will walk through the club on their way to and from the locker room. Read more about their different premium seating options HERE, and how they feel about the sales of these tickets HERE.

New York FC has utilized a similar concept at Yankee Stadium. Check out the fan’s reaction in this short VIDEO.

Charlotte FC will have a similar field club after their renovations are complete to Bank of America Stadium later this year. Check out their video HERE and pay specific attention to the proximity of their new club, The Vault.