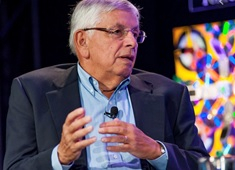 One year ago, we lost NBA Commissioner Emeritus David J. Stern – a case study of perhaps the most transformative and admired leaders in sports business history

The most transformative and admired leaders in sports business history

Last January, I flew to New York City to attend the memorial service that honored David J. Stern.  It was a “sellout” at the mammoth Radio City Music Hall.  David influenced perhaps thousands of people who aspired for a career in sports business, including having a profound impact on me, as I was lucky enough to work at the NBA in the mid-80’s at a time when there were only about 50 people at the league office.  On my first day, we crossed paths in the halls, where he noticed I did not have collar stays to straighten the collars of my dress shirts – to this day, I never forget that appearance matters!  When David finally raised he voice at me, I was relieved, as that was a sign that I was noticed, mattered and relevant.  When he called me at home (several times) during national television broadcasts, reacting to the smallest production details, I learned that brand was everything.  As we come to the anniversary of David’s far-too-early passing at 77, thinking about leadership, I want to share some great accounts.

Leadership Lessons from One of the Great Chief Executives: David Stern (Forbes, Nov. 1, 2012)

Remembering the man who turned the NBA into a model for modern leagues (Sports Business Journal, Jan. 6, 2020)